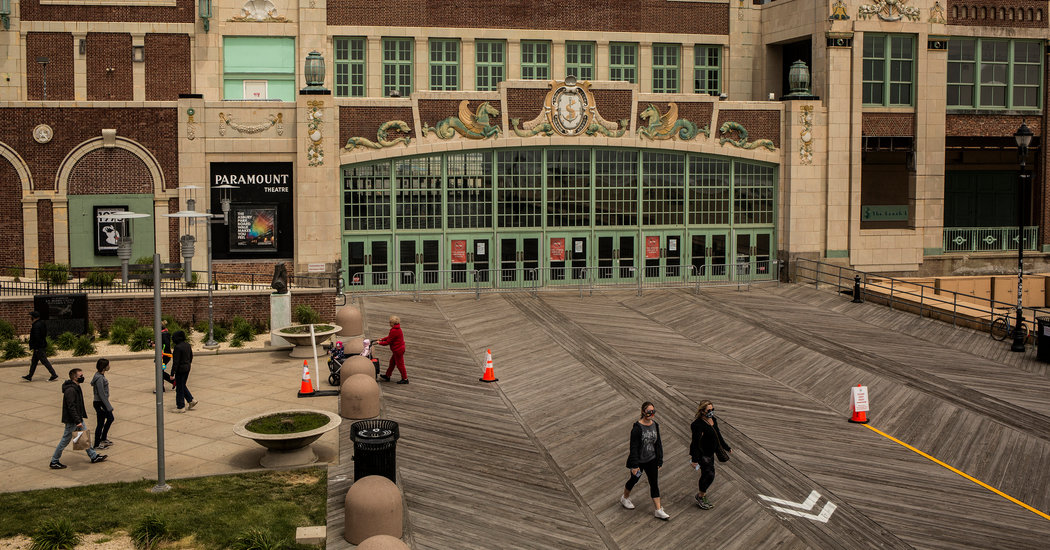 In 2017, the Jersey Shore city, known for its urban flare and seaside charm, voted overwhelmingly in favor of Gov. Philip D. Murphy, a first-term Democrat who lives about 15 miles away.

But that did not stop an insurrection linked to the coronavirus pandemic from brewing on the boardwalk.

On Friday, Mr. Murphy countered, saying the state had taken the unusual step of suing the city to block it from letting its 80 restaurants fully reopen after efforts to “amicably resolve the issue” broke down.

“We have one set of rules,” Mr. Murphy said in announcing the lawsuit.

“There’s no question this virus is more lethal inside than outside,” he added. “There’s a method to what we’re doing here, folks.”

Hours later, after a judge granted the state’s request, Asbury Park officials reversed course, telling restaurant owners that they could be fined or lose their liquor licenses if they opened for indoor dining on Monday.

But city officials also said in a statement that they hoped the showdown with the governor would force him to quickly set a date for restaurants to reopen fully.

New Jersey has the second-highest number of Covid-19 deaths in the United States and is one of the last states in the country to ease restrictions on indoor dining as it moves to gradually lift a lockdown that was meant to slow the spread of the virus.

But as the state begins its slow recovery, the restrictions on indoor dining have become a source of intense frustration for restaurants that have been closed for all but takeout orders since the middle of March.

Asbury Park’s short-lived act of defiance came as pressure mounted in New Jersey and throughout the country for government officials to more quickly drop coronavirus-related restrictions that have battered the economy.

Much of the pressure has come from conservatives, fueled by President Trump, who on Wednesday said he would hold a large political rally next week in Oklahoma, his first such event since the pandemic swept across the country. Mr. Murphy and his wife, Tammy, were expected to have dinner on Friday with Mr. Trump at the president’s Bedminster golf club to discuss, in part, New Jersey’s reopening plans.

Last month, protesters in Texas and Michigan brandished guns while demanding a speedier reopening. A gym in South Jersey briefly reopened to publicly protest the state’s restrictions, as did a movie theater in Atlantic County that closed last week after facing what it called an “onslaught of citations.”

On Thursday, the mayor of Wayne, N.J., a Republican, set up a showdown with state officials by saying the township’s high schools would hold outdoor graduation ceremonies next week, three weeks ahead of a schedule that Mr. Murphy set for such ceremonies. The mayor, Christopher P. Vergano, did not return calls seeking comment.

She said that the city could no longer ignore the economic hardship that independently operated restaurants were facing, particularly when other retail establishments had been granted permission to begin to reopen.

“These aren’t big chains,” Ms. Quinn said. “They’ve poured their life savings into these restaurants. It’s heartbreaking. We felt like we needed to take a stand.”

But the governor has remained insistent that it was “too soon” for indoor dining, drawing a distinction between sedentary indoor activities and outdoor events.

For restaurant owners, the long weeks without customers have exacted a staggering financial toll.

“We’re crippled as an industry,” said Marilyn Schlossbach, the owner of Langosta Lounge, a restaurant and bar on the Asbury Park boardwalk. “Especially in these shore towns where every day is huge dollars that we’re losing.”

There are also logistical problems inherent in opening only outside seating, said Ms. Schlossbach, the chairwoman of the New Jersey Restaurant and Hospitality Association. If, for example, it started to rain or get windy, she said, diners would have nowhere to go.

The rigid cleanliness protocols already required at restaurants make them uniquely prepared to handle the added threat of the virus, she said.

“If I can go to the supermarket and Home Depot and there’s 100 people in there shopping and walking all over the place, why can’t I go to a restaurant?” said Ms. Schlossbach, who owns two other Jersey Shore restaurants, which she said were dependent on the 12-week summer season for survival.

A poll conducted last month by Rutgers’ Eagleton Center for Public Interest Polling found that two-thirds of New Jersey’s residents were satisfied with the pace of reopening.

Attitudes along the Jersey Shore, where voters tend to be more conservative, were slightly less favorable, said Ashley Koning, the director of the polling institute.

“I don’t think that it’s a surprise here that we see this tug of war,” she said. “Obviously this is their prime season.”

Amy Russo, the owner of Toast, a breakfast and brunch restaurant in downtown Asbury Park, called the state’s reopening plan “arbitrary” and “illogical.”

John Farmer Jr., the director of the Eagleton Institute of Politics at Rutgers University and a former New Jersey attorney general, noted the continuing threat posed by the virus, which has killed at least 12,489 state residents.

He said the governor had no choice but to take legal action to quell Asbury Park’s open rebellion.

“If they allowed that to go forward without an injunction,” Mr. Farmer said, “it would absolutely open the floodgates and show he’s not serious about these orders.”