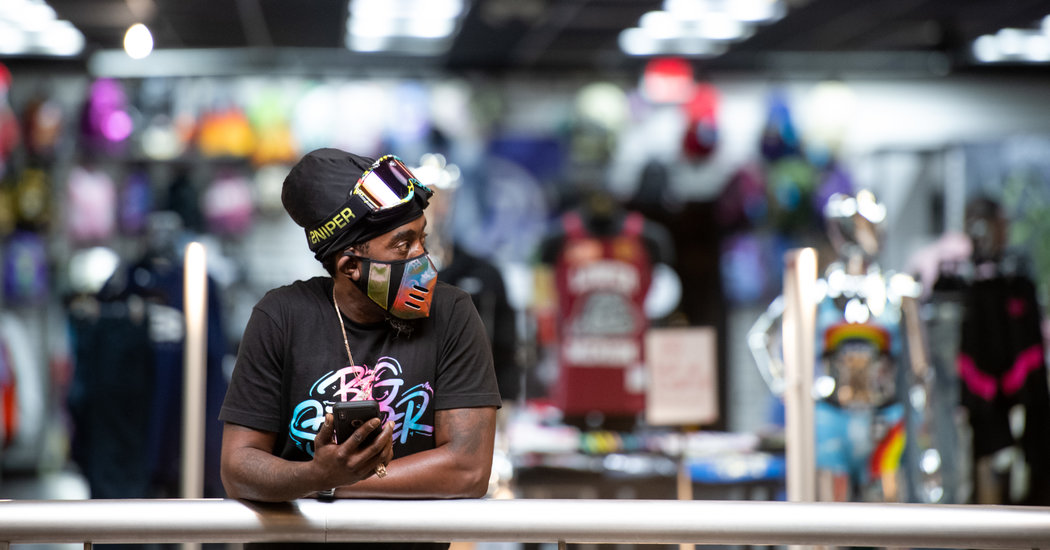 WASHINGTON — Efforts to quickly restart economic activity risk further dividing Americans into two major groups along socioeconomic lines: one that has the power to control its exposure to the coronavirus outbreak and another that is forced to choose between potential sickness or financial devastation.

It is a pick-your-poison fact of the crisis: The pandemic recession has knocked millions of the most economically vulnerable Americans out of work. Rushing to reopen their employers could offer them a financial lifeline, but at a potentially steep cost to their health.

State and federal officials have nowhere near the testing capacity that experts say is needed to track and limit the spread of the virus, and there is no vaccine yet. But states are already reopening, urged on by President Trump, who is eager to restart the United States economy.

That push is likely to exacerbate longstanding inequalities, with workers who are college educated, relatively affluent and primarily white able to continue working from home and minimizing outdoor excursions to reduce the risk of contracting the virus.

Those who are lower paid, less educated and employed in jobs where teleworking is not an option would face a bleak choice if states lift restrictive orders and employers order them back to work: expose themselves to the pandemic or lose their jobs.

That disempowered group is heavily black and Latino, though it includes lower-income white workers as well.

“It’s sad and scary,” said Tina Watson of Holly Hill, S.C., who has seen her hours cut in half at the Wendy’s where she works. Though her income has dropped from that cutback, she is worried about having to interact with customers when the state relaxes limits that have forced the restaurant to operate as drive-through only in recent weeks. “I’m feeling like my life is at risk if they open up our dining,” Ms. Watson said.

A growing share of workers is increasingly stuck with that choice.

The governors of Georgia and South Carolina have begun allowing some businesses to reopen, even though both states continue to see new infections and what the Centers for Disease Control and Prevention call “widespread” community spread of the virus.

On Friday, Gov. Brian Kemp of Georgia allowed gyms, nail and hair salons, and bowling alleys to begin operating, with restaurants and movie theaters allowed to open on Monday. Colorado, Minnesota, Mississippi and Ohio are also allowing some businesses to start operating again.

Not all businesses will decide to reopen even if they are allowed to; many will choose to stay closed, fearing too few customers to make it worth the cost. That was the situation in parts of Georgia on Friday, as many establishments kept their doors shut. But furloughed workers whose employers recall them to their jobs would in most circumstances lose their unemployment benefits, even if their pay might not return to the levels they were earning before the crisis.

That is particularly difficult for manicurists or wait staff who rely on tips from customers who might not show up. They would also lose out on both regular unemployment benefits and an additional $600 a week from the federal government.

Rashad Robinson, the president of the racial justice advocacy group Color of Change, said Georgia’s governor “has targeted a whole set of businesses where black people both work and patronize.” For those workers and customers, he said, “it is an absolute death sentence.”

Even though they face higher risks from reopening, a small but meaningful share of financially hurt workers is clamoring to return to work. One in 11 Americans, according to national polling data by the digital research firm Civis Analytics, have lost a job, hours or income — or know a family member who has — during the pandemic but oppose mandatory lockdowns.

Americans who earn $50,000 a year or less are more than twice as likely to say they or a family member have lost jobs amid the crisis as those who earn more than $150,000, the polling found. Higher earners and whites are far more likely to say they can work from home during the pandemic than lower earners and black and Latino Americans, according to an April poll for The New York Times by the online research firm SurveyMonkey.

The University of Chicago economists Simon Mongey and Alex Weinberg released a study last month on the Americans who work in jobs that require people to be in close physical proximity (like nail salon workers) or allow little chance to work from home (like fast-food or maintenance workers). They found those workers were disproportionately nonwhite, low income, born outside the United States and not college graduates.

“If it’s a fast reopening,” Mr. Mongey said, “they’re going to be in closer proximity and face higher health consequences.”

The virus has only exacerbated that inequality, with minorities suffering both higher death rates and more financial harm.

In New York City and across the country, black and Latino Americans are dying at higher rates from the virus than whites. Economic polling data shows they are also losing their jobs and income to an outsize degree. In Minnesota, the share of black workers filing for unemployment over the last month is nearly 50 percent higher than the share of white workers.

The Civis Analytics polling over the last several weeks found that black and Latino Americans were far more likely than whites to report that they had lost a job or income from the virus, or that it had caused them to miss a rent or mortgage payment or face eviction.

Calculations by the Center for Economic and Policy Research found that black and Latino Americans were overrepresented in many “essential” jobs of the pandemic, like grocery store clerks and delivery drivers. In New York City, three-quarters of front-line workers in the pandemic were Americans of color. Nationwide, about one in five black workers were in the health care industry last year, compared with about one in eight white workers, Bureau of Labor Statistics data shows.

The risks and damage from the virus are “disproportionately landing on the black and brown workers that are disproportionately in minimum-wage services jobs,” said Mary Kay Henry, the president of the Service Employees International Union.

“There could be immense and devastating income effects that could be involved with this evolving depression,” said William A. Darity Jr., an economist at the Sanford School of Public Policy at Duke University, who is a leading scholar of economic discrimination in the United States. Inequality, he said, “has been horrendous in recent years, and I can only imagine those disparities would get worse.”

Avik Roy, a former adviser to the Republican presidential campaigns of Rick Perry and Marco Rubio, is now the president of a center-right think tank called the Foundation for Research on Equal Opportunity, which this month released a plan to quickly restart much of the economy. It includes reopening schools while carrying out an aggressive system of tracing the contacts of Americans who are infected with the virus and quarantining vulnerable groups and people potentially exposed to the virus.

Mr. Roy said in an interview that the plan was motivated in part by research suggesting that prolonged school closures disproportionately hurt nonwhite and low-income children, who are less likely to have access to educational materials at home that allow them to keep up with more affluent peers.

But many economists warn that hasty moves to restart the economy will simply increase the risks for vulnerable workers without generating significant growth. There is widespread concern that consumers will not travel and spend as freely as they had before the pandemic until therapeutic treatments or a vaccine are developed or testing has ramped up to a degree that gives people confidence that they can resume normal activities without risking infection and death.

“If restrictions on social distancing are lifted without adequate supports — testing, tracking and protective gear — in place, many people will choose to stay home if their circumstances will allow them to,” said Heather Boushey, the president of the Washington Center for Equitable Growth, a liberal think tank focused on inequality. “In other words, we will see small-business, low-wage and hourly workers who are most desperate to get back to work as the first to go back, putting themselves and their families in danger.”

Workers who have no choice but to report for duty say they are already confronting those choices every day. Ms. Watson, the Wendy’s worker, said she feared potentially bringing the virus home to her 11-year-old son, Xzaibayan.

Kim Thomas, a home health aide in the Myrtle Beach, S.C., area, has begun delivering groceries for an online service to make up for hours she lost because of the outbreak.

In the grocery stores where she shops, Ms. Thomas said in a phone interview, “not everyone is practicing safe distancing. They’re not.”

She said she was concerned for her livelihood in an area that depended heavily on tourism to keep its economy running. But she also feared for her health.

“I’m definitely worried about catching Covid-19,” Ms. Thomas said. “I worry about it every day.”