Jobless Claims Hit 3.3 Million in the Last Report. This Week’s Will Probably Be Worse. 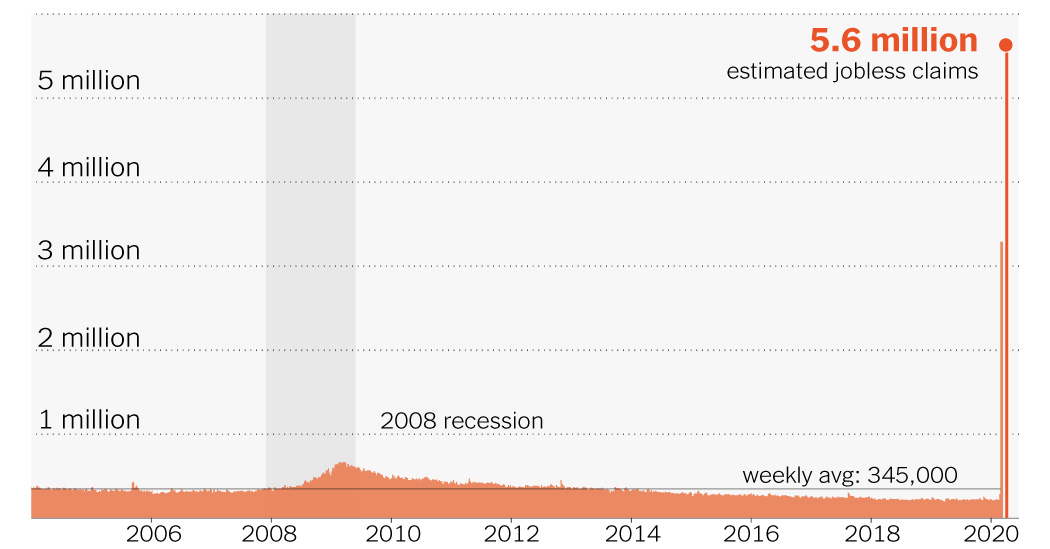 The Department of Labor reported last week that more than three million people filed for unemployment from March 15 to March 21, the largest single-week increase in American history.

But Thursday’s number, which reflects claims filed last week, could rise to 5.6 million, according to an analysis of Google search data by the economists Paul Goldsmith-Pinkham of Yale and Aaron Sojourner of the University of Minnesota.

If these forecasts are accurate, there will be as many claims in two weeks as in the first six months of the Great Recession.

The search data is helpful because it reflects daily interest in unemployment claims. A few weeks ago, state agencies were releasing their own counts of jobless claims ahead of the federal government, but as those numbers reached record levels, the Trump administration asked them to withhold their counts before the official national release. (Some states, like Pennsylvania, are ignoring that request.)

Last week, searches for “File for unemployment” grew significantly nationwide, up 62 percent from the week before. Michigan, in particular, had a huge surge (up 160 percent) in unemployment searches as businesses closed after a stay-at-home order was issued by Gov. Gretchen Whitmer on March 24.

The researchers say their analysis is imperfect. It accounts for the interest in jobless claims, but does not necessarily correspond to the number of people who can actually get through to the unemployment office. State resources have been severely strained with astronomical levels of interest from recently laid-off workers, leading to long wait times, nonworking websites and jammed phone lines. This suggests the true numbers are higher than what the Department of Labor will report Thursday.

This effect was evident last week in their state-level predictions for California, New York, Ohio and Pennsylvania, they say. For instance, in California, the researchers predicted that claims would reach 639,000. The reported number came out to be 186,809. They say this discrepancy reflects how inundated the state was with requests. Mr. Goldsmith-Pinkham and Mr. Sojourner expect the previous numbers to be revised upward with the release of the new numbers Thursday.

In the past, statistical exercises to forecast unemployment claims and the unemployment rate have performed poorly. In normal times and even during typical recessions, so many people are being hired and fired daily that it’s hard to predict how many people will end up filing for unemployment.

The difference this time is that there is very little hiring to replace the losses, and the researchers thought their forecasts could be more accurate. So far, Mr. Goldsmith-Pinkham and Mr. Sojourner have found the relationship between searches and claims to be relatively stable.