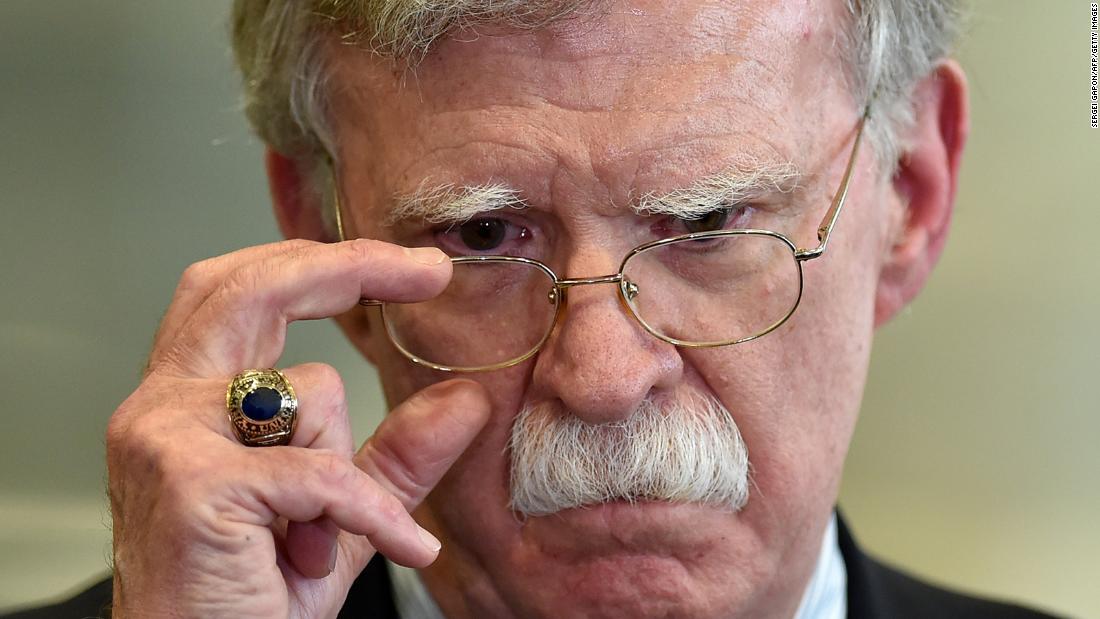 President Trump has threatened authors and publishers before — but this time the stakes are higher, with John Bolton about to release a damning account of his time inside the Trump White House, and Trump determined to stop him.
Trump made several misstatements on Monday that showed just how angry he is about “The Room Where It Happened,” which comes out in one week. “If he wrote a book, and the book gets out, he’s broken the law,” Trump claimed. “I would think he would have criminal problems. I hope so.”

From a First Amendment perspective, it’ll be a much bigger problem if the book doesn’t get out. American politicians don’t get to veto unflattering tomes — everyone knows that. But for Trump, the First Amendment is always about putting his own interests “first.” So he may still try to block the book’s release.

Trump was noncommittal when asked about the possibility of a lawsuit — he said “they’re in court, or they’ll soon be in court” over the book. This is an “I’ll believe it when I see it” situation, given Team Trump’s history of threatening to sue but not following through.

With my notes in parentheses:

Both Trump and Attorney General Bill Barr looked uncomfortable when they were asked about this subject during a WH event. When Trump invited Barr to comment, the A.G. said figures like Bolton “have to go through a clearance process” re: classified info and “we don’t believe that Bolton went through that process, hasn’t completed that process, and therefore is in violation of that agreement.” Bolton’s camp disputes that up and down. Just look at the timeline: The book was delayed for months due to the review process.

Jameel Jaffer, exec director of the Knight First Amendment Institute at Columbia U, said this on Monday: “For good reason, American courts almost never issue prior restraints against the publication of matters of public concern. Prior restraints squelch speech before it occurs and almost always sweep too broadly. The request the government is making in this case is particularly disturbing against the background of credible reports that the White House’s real concern here is not safeguarding national-security secrets but suppressing criticism of the president. It’s highly doubtful that the government can meet the exceptionally high standard that must be met in order to justify an injunction against publication.”

There are also practical factors. Copies of “The Room Where It Happened” have already been printed and shipped to distribution sites. Reporters at ABC News have already read the book, since Martha Raddatz sat down with Bolton on Monday for an interview that will air Sunday night in a prime time special. Other reporters are likely to obtain the book in the next few days. So if the Trump admin or the Trump campaign tries to sue to block the release of the book, the suit would be rendered moot…

What does Trump fear about this book?

Well, according to the summary of the book, “Trump’s Ukraine-like transgressions existed across the full range of his foreign policy — and Bolton documents exactly what those were, and attempts by him and others in the Administration to raise alarms about them.”

BTW, the Attorney General is wrong about this:

On Monday Barr told reporters “this is unprecedented, really. I don’t know of any book that’s been published so quickly while, you know, the officeholders are still in government and it’s about current events…

That’s completely untrue. Leon Panetta, Hillary Clinton and Bob Gates all published books about current national security topics after leaving the Obama admin, and their accounts were not altogether flattering even though their books were published while Obama was still in office. And during the Bush admin, former White House press secretary Scott McClellan wrote an unflattering book when Bush was still in office.

Simon & Schuster in the spotlight

— On Monday, S&S confirmed The Daily Beast’s scoop about a forthcoming book by Mary Trump. It will be coming out July 28, with “harrowing” revelations…
— On Monday night, the book’s full title was revealed via an Amazon listing. It’s called “Too Much and Never Enough: How My Family Created the World’s Most Dangerous Man.” Read the description here…
— On Tuesday, Mary Jordan’s news-making book about Melania Trump, “The Art of Her Deal,” hits stores and e-readers…
— Lest you think the publishing house only points in one direction, it is also publishing Sean Hannity’s “Live Free Or Die,” coming out August 4…
— Full disclosure: S&S is also publishing my book “Hoax: Donald Trump, Fox News, and the Dangerous Distortion of Truth,” coming out August 25…