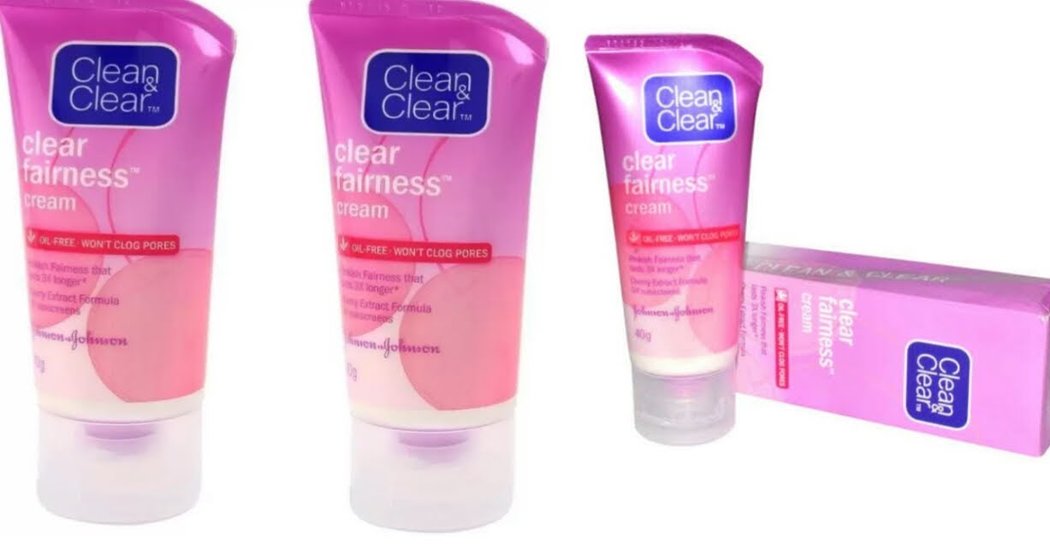 The consumer-products giant Johnson & Johnson said on Friday that it would no longer sell certain products that are advertised as dark-spot reducers but have been used by some purchasers to lighten skin tone.

The product lines, Neutrogena Fine Fairness and Clear Fairness by Clean & Clear, were not distributed in the United States but were sold in Asia and the Middle East.

“Conversations over the past few weeks highlighted that some product names or claims on our Neutrogena and Clean & Clear dark-spot reducer products represent fairness or white as better than your own unique skin tone,” the company said in a statement. “This was never our intention — healthy skin is beautiful skin.”

The company said its website was being updated to remove links to both products, which may still appear on shelves “for a short while.”

“We will no longer produce or ship the product line,” the company said.

The statement followed a string of announcements this week by companies saying they would be removing brands that have been criticized for using racist imagery to sell products. On Wednesday, the owners of Cream of Wheat, Uncle Ben’s Rice and Mrs. Butterworth’s all said they would be reviewing how the brands’ products are packaged.

Those announcements came after Quaker Oats said it would retire Aunt Jemima, the pancake mix and syrup brand, after acknowledging that its logo, a grinning black woman, was based on a racial stereotype.

In India, where the Clean & Clear skin-lightening line is sold, consumers have posted reviews touting the products’ effects and their ability to lighten skin. In Asia, commercials advertising Neutrogena Fine Fairness have described how it allows a consumer to “whiten more thoroughly.”

Other companies have been criticized for expressing solidarity with the Black Lives Matter movement while also selling products that advertise their skin-lightening effects.

More than 11,000 people have signed a petition calling on Unilever to stop selling Fair & Lovely, a skin-lightening product marketed in India and the Middle East. Commercials for the lotion have shown dark-skinned women using it to lighten their skin and then becoming more successful as a result.

“This product has built upon, perpetuated and benefited from internalized racism and promotes anti-blackness sentiments amongst all its consumers,” the petition says.

The decision to remove the Clear Fairness line is the latest move by Johnson & Johnson to respond to the demonstrations against racism that have been held across the country since the death of George Floyd.

“⁣⁣We stand in solidarity with our Black colleagues, collaborators and community in the fight against racism, violence and injustice,” Band-Aid said in an Instagram post. “⁣⁣We are committed to launching a range of bandages in light, medium and deep shades of Brown and Black skin tones that embrace the beauty of diverse skin. We are dedicated to inclusivity and providing the best healing solutions, better representing you.”

The company said it sold bandages with different skin tones in 2005 but discontinued the products “due to lack of demand.”

“Since then, we’ve seen conversation increase on this topic and we were planning to bring a new offering to the market for diverse skin tones,” the company said in a statement.

Dominique Apollon, vice president for research at Race Forward, a racial justice advocacy organization, said that Johnson & Johnson’s decisions to stop selling the lotions and to reintroduce the bandages were positive but long overdue.

Mr. Apollon called the creams “a symptom of anti-blackness that occurs around the world.”

Last year, Mr. Apollon posted a photo of himself on Twitter wearing a dark brown bandage that matched his skin tone. The photo of the bandage, which was made by a company called Tru-Colour, blending with Mr. Apollon’s skin was retweeted over 100,000 times.

“It shocked me how beautiful it looked,” Mr. Apollon said. “It gave me this experience of how it felt to be included and regarded as opposed to disregarded.”