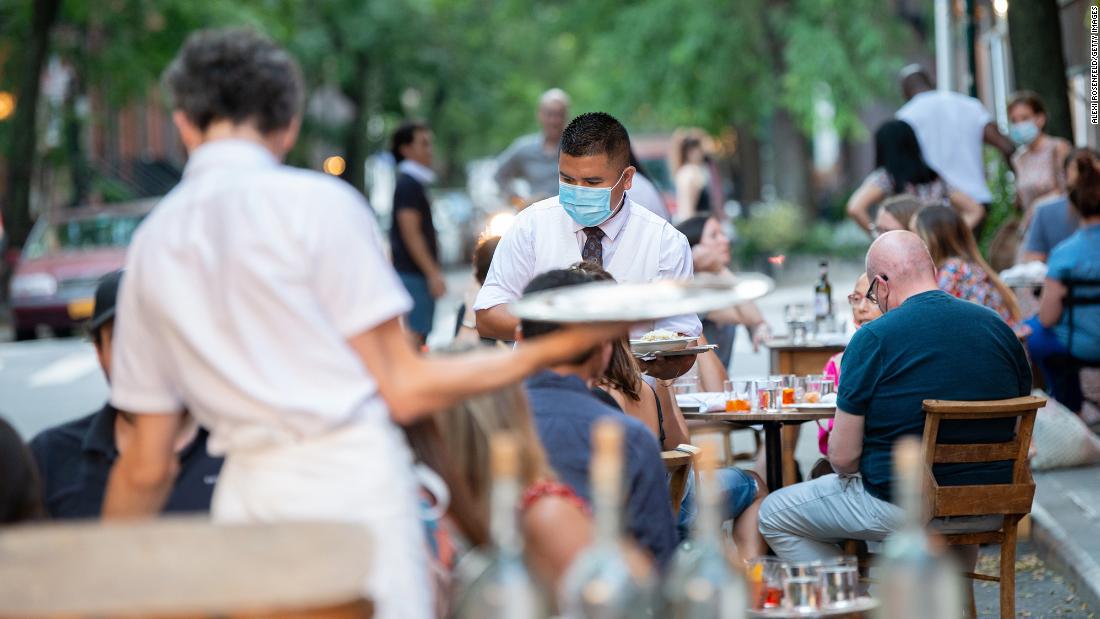 While the expected improvement is certainly good news, America would still be down 16.6 million jobs since February — even after two consecutive record months of job growth.

And “the pain has not been evenly spread,” Federal Reserve Chairman Jerome Powell told the House Financial Services Committee Tuesday. “The rise in joblessness has been especially severe for lower-wage workers, for women, and for African Americans and Hispanics.”

The Bureau of Labor Statistics will release the June jobs report at 8:30 am ET on Thursday. (The traditional Friday release day coincides with the Independence Day holiday.)

On Wednesday, the ADP employment report showed 2.4 million private payroll jobs were added in June, less than the 3 million jobs economists had expected. The hospitality and leisure sector added the most jobs.

At the same time, the May numbers were revised dramatically: ADP now says 3.1 million jobs were added in May, after the initial report showed a 2.8 million drop in positions. That is a revision of more than 5 million jobs, and it should give the lower-than-expected June number some perspective.

While the ADP and BLS numbers are based on different surveys, the former is considered an indicator ahead of the government’s jobs report.

America’s job market, even as it improves, is being pummeled by a number of factors that are in opposition to each other.

Businesses are reopening, which is good for the labor market, and government stimulus as such the Paycheck Protection Program are helping, too, said Erica Groshen, a senior labor economics adviser at the Cornell University School of Industrial and Labor Relations.

At the same time, the pandemic recession still has some industries in a choke hold, and rising Covid-19 infections are threatening to put a stop to the reopening.

States that rely on the tourism and hospitality industries continue to struggle with extreme jobless rates. In Hawaii, for example, continued claims for unemployment benefits account for 20% of the pre-pandemic labor force. Claims are similarly high in Nevada, and Gov. Steve Sisolak paused the state’s reopening in its second phase earlier this week because of rising Covid-19 infections.
Simultaneously with Thursday’s BLS report, the Labor Department will publish its weekly jobless claims report.

Another 1.4 million first-time claims for unemployment benefits are expected for the week ending June 27. Continued claims, which count workers who filed for benefits at least two weeks in a row, are expected to be 19 million — half a million less than in the prior week.

The Labor Department’s weekly report is the closest to real-time data economists can get during this turbulent time, and it’s been telling the same story for weeks: Things are improving, but at a slower pace than economists hoped.

What the data is really telling us

The number of unemployed people and workers filing for benefits remains staggeringly high. And the statistics don’t even tell the whole story.

“About a quarter of the workforce is still either unemployed, had their hours reduced, or had their pay cut,” said Mark Zandi, chief economist at Moody’s, in a note.

The BLS also has been struggling with misclassification errors since the pandemic’s start. Its tried-and-tested system was simply not prepared for this unprecedented situation.
“How hard can it be to figure out whether a person is employed or unemployed? Turns out, it can be hard,” the BLS wrote in a blog post earlier this week.

During the pandemic, many people whose places of work shut down were counted as employed but absent, when in fact they had lost their jobs — hopefully only temporarily — due to the lockdown. The BLS estimates a whopping 4.9 million workers were misclassified in May.

So economists and laypeople alike will have to take Thursday’s unemployment rate with a grain of salt.

“Containing the virus and supporting the economy are not mutually exclusive,” Zandi said. “In fact, a healthy population is a necessary condition for a strong economy.”