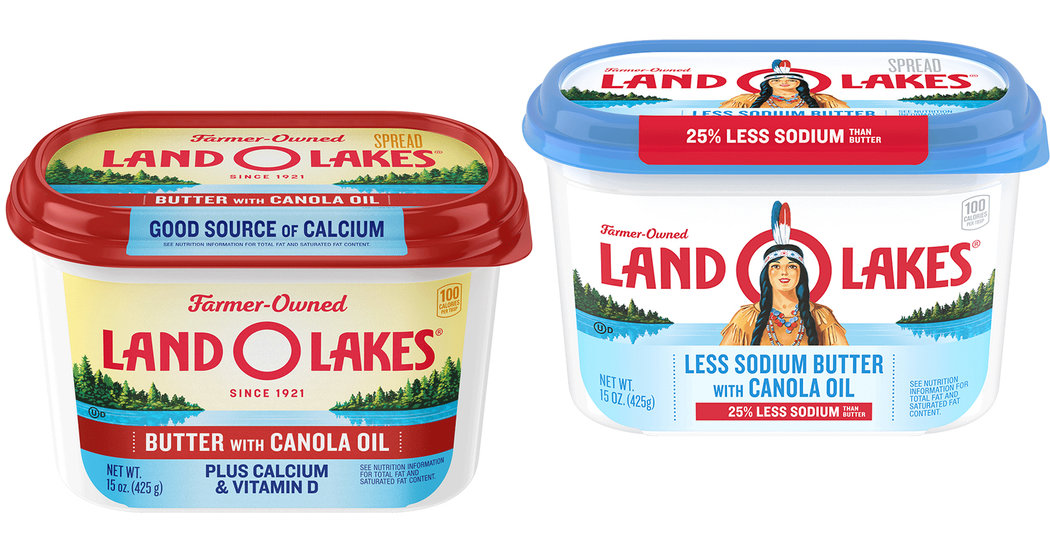 For nearly a century, an illustration of a Native American woman with a feather in her hair has adorned the packaging of Land O’Lakes cheese and butter products. But not for much longer.

The company, founded in 1921 by a group of Minnesota dairy farmers, is phasing in a new design ahead of its 100th anniversary. Instead of the depiction of the woman, some products will be labeled “Farmer-Owned” and feature an illustration of a field and lake, or photographs of its farmers, the company announced.

The new design, which started appearing on tub butter spreads, food service products and deli cheese in February, is now being used on packages of stick butter and will be “fully rolled out” by the end of the year, the company has said.

This week, officials and Native American representatives applauded the change, which is similar to steps that other U.S. companies, sports teams and universities have undertaken to address or phase out Native American imagery in logos and mascots.

“Native people are not mascots or logos,” Lt. Gov. Peggy Flanagan of Minnesota said on Twitter on Wednesday. She thanked the company for the “important and needed change,” linking to a Minnesota Reformer report.

“We are very much still here,” said Ms. Flanagan, who is a citizen of the White Earth Nation of Ojibwe.

In a statement in February, Beth Ford, the Land O’Lakes chief executive, said that as the company looked ahead to its centennial, it recognized the need for “packaging that reflects the foundation and heart of our company culture.”

“Nothing does that better than our farmer-owners whose milk is used to produce Land O’Lakes’ dairy products,” she said.

It was not immediately clear why Land O’Lakes, which is based in Alden Hill, Minn., decided this year to make the change to an image that has adorned its products for nearly 100 years, nor did the company make any reference in the statement to the implications of such depictions of Native Americans. A company spokeswoman did not reply to emailed questions on Friday.

The American Psychological Association has recommended the immediate retirement of Native American mascots and symbols, in part because they appear “to have a negative impact on the self-esteem of American Indian children.”

Some said it was demeaning cultural appropriation to use the image of the woman, who has been depicted as kneeling in the original design and has been used as the butt of vulgar social media jokes.

The imagery of the Land O’Lakes woman has been reflected in Native American art. David Bradley, a sculptor and a Minnesota Chippewa, named a piece “Land O’Fakes” in a 2005 show that confronted fraud in the market and “the commodification of Indian culture — the packaging of it in an attractive way to make money,” as the artist put it.

The original logo of the company’s “butter maiden” first appeared on Land O’Lakes packaging in 1928, created by Arthur C. Hanson, an artist who worked for a local advertising firm.

It was redone about 30 years later by Patrick DesJarlait, a Chippewa artist who died in 1972. As a Native American, he was a rarity in the illustration business at the time, his son Robert DesJarlait said in an interview on Friday.

“He redid her features and the dress she is wearing, a Plains-style dress with beaded panels,” said Mr. DesJarlait, a member of the Red Lake Ojibwe tribe in Minnesota. “He added floral designs for the Chippewa culture. It was basically a redesign. He gave her a clearer image. So he was modernizing her a bit.”

Though some groups have held up the illustration as an example of stereotyping, Mr. DesJarlait said, he didn’t see it that way. “She was never created as a stereotype,” he said.

Mr. DesJarlait said he believed that the company did not discard the imagery to get rid of a stereotype, but out of discomfort with keeping any representations of Native Americans at all.

“She just disappeared,” he said.