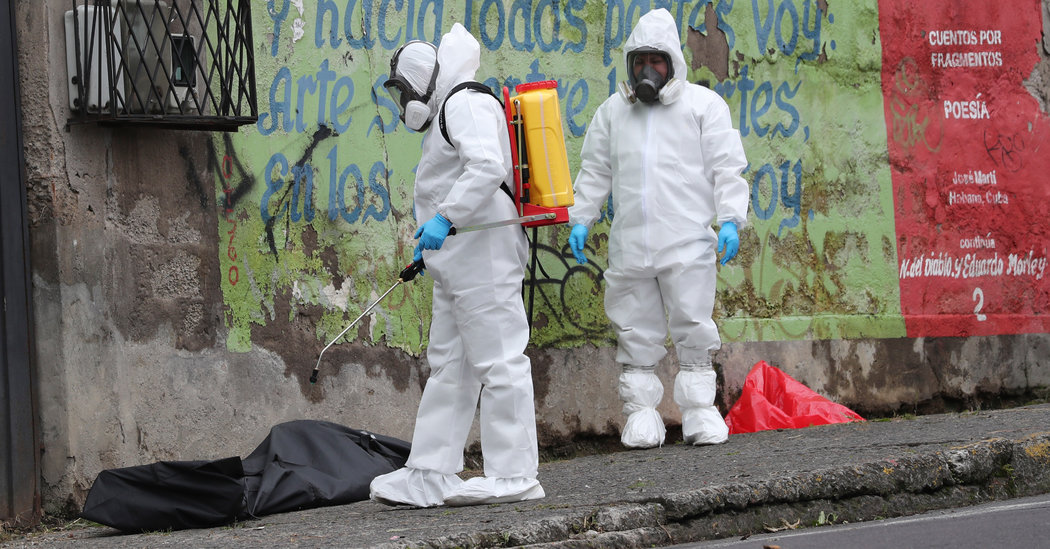 Of all the schemes that have siphoned resources from Latin American countries fighting the coronavirus, the body bag conspiracy might be the most brazen.

Last month, prosecutors in Ecuador announced they had identified a criminal ring that had colluded with health officials to win a contract selling body bags to hospitals at 13 times the real price.

Then one of the men implicated, Daniel Salcedo, fled Ecuador in a small plane that crashed in Peru. Mr. Salcedo is now recovering in the custody of the Ecuador police.

Even as Latin America has emerged as an epicenter of the pandemic, with deaths and infections soaring, efforts to contain the crisis have been undermined by a litany of corruption scandals.

Dozens of public officials and local entrepreneurs stand accused of exploiting the crisis for personal enrichment by peddling influence to price-gouge hospitals and governments for medical supplies, including masks, sanitizer and ventilators. Some of the gear was so flawed that it was rendered useless — and may have contributed to even more sickness and death.

“People are dying in the streets because the hospital system collapsed,” said Diana Salazar, Ecuador’s attorney general. “To profit from the pain of others, with all these people who are losing their loved ones, it’s immoral.”

Investigations into fraud have reached the highest levels of government. The former Bolivian health minister is under house arrest awaiting trial on corruption charges after the ministry paid an intermediary millions more than the going rate for 170 ventilators — which didn’t even work properly.

In Brazil, which has the second highest number of coronavirus deaths after the United States — and on Friday surpassed one million reported cases — government officials in at least seven states are under investigation on suspicion of misusing more than $200 million in public funds during the crisis.

In Colombia, the inspector general is investigating reports that more than 100 political campaign donors received lucrative contracts to provide emergency supplies during the pandemic.

Peru’s police chief and interior minister resigned after their subordinates bought diluted sanitizer and flimsy face masks for police officers, who then began dying of infections from the virus at alarming rates.

Prosecutors are investigating links between police officials and the suppliers of the equipment to determine whether they colluded to defraud the government, according to Omar Tello, the head of anti-corruption investigators in the prosecutor’s office.

Armillón Escalante, a police officer in Lima, said that he and his colleagues were given paper-thin masks and gloves that broke immediately.

“We didn’t really have any protection,” he said. Mr. Escalante was enforcing social-distancing measures in a crowded market alongside three other officers who have since died of the virus.

Mr. Escalante became infected in April and spent three weeks intubated in the hospital. He still suffers pain in his lungs and shortness of breath when talking.

“It wasn’t just me. The majority of us were abandoned,” he said. “I don’t feel the same as before. The disease has damaged my organs.”

When Peruvian prosecutors began to look into the purchase of protective gear this month, several boxes of evidence went missing at the headquarters of the police’s investigative crime unit in Lima. Police officers told the authorities that several security cameras were not working the day they disappeared.

Mr. Tello said the monitoring system appeared to have been manipulated and prosecutors are working to extract images of people who removed the boxes.

More than 11,000 police officers in Peru have been infected and 200 have died of the virus, according to the government, forcing the country to shutter some stations at least temporarily to contain outbreaks.

Coronavirus is testing nations that were struggling with corruption long before confronting a global health emergency. Presidents in Brazil, Peru and Guatemala have been forced from office in cases of bribery and kickbacks over the years.

But the pandemic has broadened the opportunities for public officials in Latin America to pilfer from state coffers, corruption experts say. Declaring a state of emergency, several countries suspended some regulations governing public contracts, paused in-person congressional sessions or did away with rules requiring them to respond to media requests for information.

“You have the ideal conditions for doing whatever you want,” said Eduardo Bohorquez, the director of Transparency International Mexico, an anti-corruption nonprofit group. “There is less transparency, less access to information, and zero independent oversight from Congress.”

The federal hospital system in Mexico gave back flawed ventilators that it had ordered from the son of the head of the federal electricity commission, after a local watchdog group revealed that the government had agreed to pay 85 percent more than the cheapest option.

Last month, an official within the Bolivian health ministry went to a Spanish company called IME Consulting to purchase 170 ventilators even though another company was offering the machines for half the price.

The Bolivian government agreed to pay IME Consulting about $28,000 per ventilator — three times the price that the original manufacturer said it charges for each machine.

Shortly after the ventilators arrived, doctors began complaining that the machines were not suitable to treat seriously ill coronavirus patients. A lawyer for the former health minister, Marcelo Navajas, told reporters he was “totally and absolutely innocent” and that “there was absolutely no illegal or inappropriate action here.”

Days before Mr. Salcedo’s botched escape from Ecuador, police officers raided the home of a former president, Abdalá Bucaram. They arrested him after having discovered an illegal firearm, along with thousands of face masks and coronavirus tests.

“Mr. Bucaram isn’t procedurally qualified as an importer or a vendor of medical supplies,” said Ms. Salazar, the attorney general. She said prosecutors suspect that a criminal group including Mr. Salcedo, Mr. Bucaram and some of their family members have been overcharging hospitals for medical equipment since 2018. Last year, the attorney general said, they sold one hospital thousands of body bags for $148 each, even though they were only worth about $11.

Mr. Salcedo “has been a vendor during the health emergency as well,” said Ms. Salazar. “Of course, he had to take advantage.”

Mr. Salcedo’s brother, Noé, was caught this month trying to cross the border into Peru with $47,000 in cash — money that investigators believe was illicitly obtained — and he is now in jail. Prosecutors have issued arrest warrants for Michel and Dalo Bucaram, two of the former president’s sons. Until recently, Dalo Bucaram was staying at Mr. Salcedo’s house in Miami.

Mr. Salcedo’s lawyer has said her client is not involved in a corruption scheme and that the cash his brother was carrying came from a bank loan taken out by his parents. Mr. Bucaram, who is under house arrest, has denied the charges against him and said he faces “cowardly political persecution.”

Investigators suspect the tests and the masks found in Mr. Bucaram’s house were destined for Teodoro Maldonado Carbo hospital in Guayaquil, one of the cities hardest hit by the virus, where dead bodies piled up outside hospitals or were packed inside empty banana cartons for lack of storage space.

Alex Vivas, a doctor treating coronavirus patients at Teodoro Maldonado Carbo hospital, said he was appalled by the scheme.

“For us, the medics on the front lines, it is outrageous to see this level of corruption,” Mr. Vivas said in an interview. “To see how these overpriced contracts consume up the budgets that should be destined for such protection gear, it’s simply outrageous.”