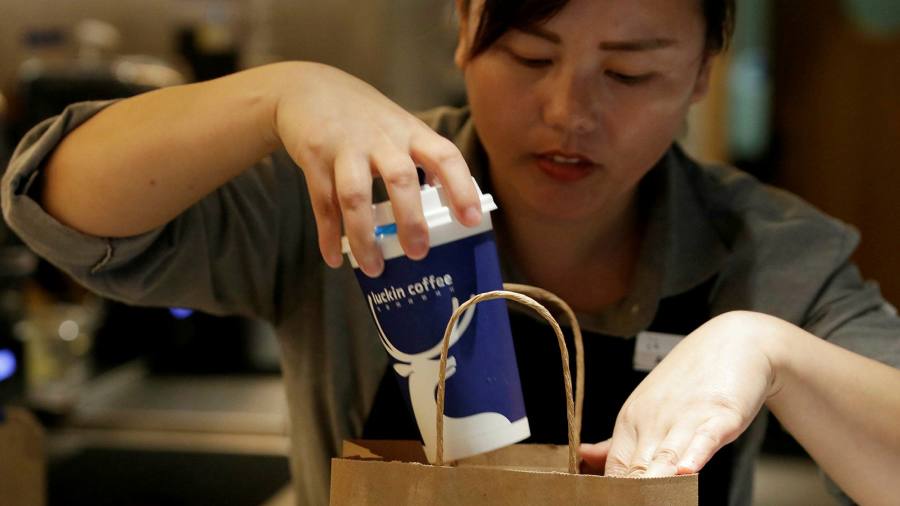 Luckin Coffee’s implosion has shattered the faith of some international investors when it comes to Chinese companies listed on the world’s biggest stock exchange.

The New York-traded shares of the coffee chain — which was often touted as China’s Starbucks rival — have tumbled more than 80 per cent since it was revealed that an internal investigation found hundreds of millions of dollars of its sales last year were “fabricated”. Trading in the stock is currently frozen.

The debacle has turned the spotlight back on the accounting risks faced by investors in US-listed Chinese companies, and provided further ammunition for Washington’s China hawks.

“It makes you question the whole system, honestly,” said Andrew Left, founder of US-based short-seller Citron Research. Mr Left is better known for making bets that Chinese companies’ stocks will fall. But in the case of Luckin he held a long position, meaning he made money when the shares rose.

“It just shows you the lack of controls; you obviously know this wasn’t done by just one person,” Mr Left said of the alleged fraud at Luckin, whose other big investors included BlackRock and Singapore sovereign wealth fund GIC.

Mr Left stood by his position in Luckin even after Muddy Waters, a rival short-seller, disclosed in January that it was betting against the shares. Luckin’s business “is on fire in China”, Citron Research said in a tweet at the time. But Mr Left said he is now trawling through his inbox looking for signs of potential fraud at other Chinese companies.

He is most likely not the only one. “There’s a lot of investors who’ve lost a lot of money on this deal and there’s going to be real questions on where were the auditors,” said Paul Gillis, professor of accounting at Peking University’s Guanghua School of Management.

Mr Gillis said he had witnessed hundreds of similar blow-ups at US-listed Chinese companies, but the scale of the alleged fraud at Luckin was “shocking”.

It was the Chinese arm of EY, Luckin’s auditor, that confirmed the fraud in a report to the company. But the EY findings came only after multiple reports by short-sellers that questioned the authenticity of Luckin’s sales and other key figures. EY has declined to comment further on the matter.

New research circulated by short-sellers in recent days has targeted other Chinese companies listed in the US, including internet streaming platform iQiyi — which has been likened to China’s Netflix — and tutoring provider TAL Education, hitting the shares of both companies. iQiyi has denied the allegations while TAL said a rogue employee inflated 3-4 per cent of its revenues without company knowledge.

Investors would be “far more cautious and far more untrusting” of Chinese companies seeking to go public in the US following the revelations at Luckin, said Nigel Stevenson, an analyst at GMT Research in Hong Kong. “I don’t think people will be writing it off as a one-off, both in terms of what’s gone before and perhaps what’s coming in the future.”

However, some pointed to signs that Beijing may be willing to take a harder line on Chinese companies accused of corporate fraud in the US, which it has been reluctant to do in the past. Last week, the China Securities Regulatory Commission put out a statement on Luckin saying it “strongly condemns the company’s fraud”.

“China wants to demonstrate that it has evolved,” said Akiko Mikumo, former Asia head of the Weil, Gotshal & Manges law firm. “They want to show a more sophisticated face.”

That may not be enough to placate China hawks in Washington who have already been emboldened by President Donald Trump’s trade war with Beijing. The Trump administration has previously considered a ban on Chinese listings in the US.

“Luckin plays right into [US senator Marco] Rubio’s hands,” said Howard Chao, a Palo Alto-based former senior partner at a large US law firm, referring to the Florida Republican who has proposed legislation that would effectively prevent Chinese companies from raising cash in the US.

Mr Chao believes that alleged frauds such as that at Luckin could also prompt closer scrutiny by US regulators of intermediaries that work with Chinese companies on Wall Street. “I suspect they will try to punish anyone involved in the transaction to make an example of them, with a chilling effect on future Chinese IPOs in the US,” he said.

Luckin’s IPO in May last year was sponsored by investment banks Credit Suisse and Morgan Stanley, while law firm Davis Polk & Wardwell represented the coffee chain in the deal.

Credit Suisse and Morgan Stanley declined to comment on their involvement with Luckin. Davis Polk did not respond to a request for comment.

Some observers believe there is a more obvious lesson to be learned from the latest governance scandal involving a Chinese company listed in the US.

“It seems crazy to me we’re still not asking harder questions about Chinese companies that are promising incredible results,” said Fraser Howie, an independent analyst and longtime commentator on corporate China.

“To some extent I don’t blame Luckin — I blame the gullible investors who have bought into it.”