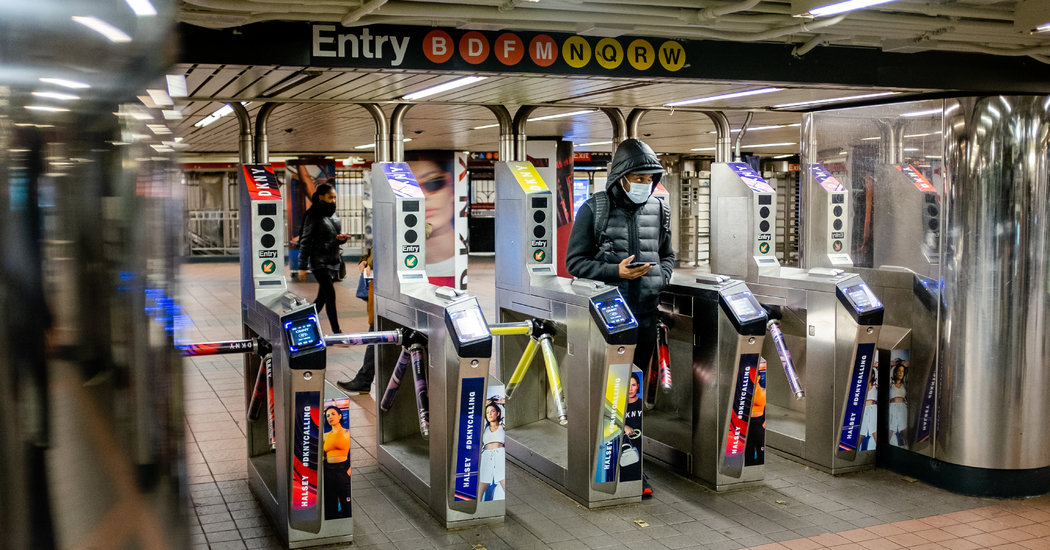 New York City’s public transportation system, the largest in North America, is seeking a $4 billion federal bailout as the coronavirus pandemic has triggered an extraordinary free fall in ridership and left transit officials facing what is likely to be the worst economic crisis in decades.

In a letter on Tuesday to New York’s Congressional delegation, the Metropolitan Transportation Authority — which runs the subway, buses and two commuter rails — said ridership had plunged 60 percent on the subway and 49 percent on buses on Monday compared with the same day last year.

Similar steep drops have taken place on other parts of the system: 90 percent on Metro-North Railroad, which serves communities north of New York City; and 67 percent on the Long Island Rail Road during the Tuesday morning rush hour compared to the same day last year.

The plea from the public transit system, which is the lifeblood for the region’s economy, could forecast a coming crisis for public transportation agencies nationwide, many of which are also reeling from plummeting ridership and crippling finances just a few weeks into the outbreak in the United States.

“The stark reality is that as more people stay home following the advice of medical experts, the M.T.A. is now facing financial calamity,” Patrick J. Foye, chairman of the transit authority, said in the letter.

The authority projects revenue losses of roughly $3.7 billion if ridership trends continue for the next several months, and expects coronavirus-specific expenses, like disinfecting subway cars and stations, to reach around $300 million.

“The M.T.A. has already committed to finding $2.8 billion in savings over the next several years,” Mr. Foye said. “No agency of our size can find additional billions in savings equivalent to the damages we have and will sustain as a result of this pandemic.”

State and city officials have said they are not planning to reduce service on the region’s vast transit system, which typically serves around eight million passengers every weekday. They have emphasized that it is important to keep the system operating so health care workers can get to work.

But the M.T.A. is particularly vulnerable to the sudden and precipitous economic downturn since it relies on a mix of funding from federal, state and city government — all of which are grappling with their own challenges — to operate and maintain its system.

“They are a barometer of the regional economy, a much more immediate barometer for things to come,” said Nicole Gelinas, a senior fellow at the Manhattan Institute, a conservative research group.

Revenues from fares and tolls, which contribute around half of the M.T.A.’s operating budget, and dedicated taxes, which provide another third of that budget, are already taking a hit as ridership falls and the pandemic sets off sweeping layoffs and business failures across the city.

Officials have urged those who can to avoid subways and buses and enacted sweeping regulations, like closing schools, Broadway theaters, museums, movie houses, bars and allowing restaurants to remain open only for take out and deliveries, that have all but shut down New York.

The draconian measures are meant to curb the spread of the virus in New York City, where the number of confirmed cases climbed to over 1,000 on Tuesday.

Still, the dual need to keep riders away from public transportation to protect the public health, while also keeping the system running to ensure essential workers can get to work has thrust transit agencies like the M.T.A. into a precarious position.

“They are performing a social good, but that costs them a lot of money,” Ms. Gelinas said. “They are in a very unique situation in that they cannot and should not cut back in service in response to the shock, so they are stuck with a huge financial burden.”

While it is still too early to say what the long term consequences might be, past financial crises have resulted in significant service cuts and fare hikes.

After the 2008 financial crisis, M.T.A. officials slashed bus service, eliminated two subway lines and imposed a 23 percent increase in fares and tolls on bridges and tunnels.

In the 1970s, a severe financial slump that brought the city to the brink of bankruptcy led the authority to close two subway lines in Manhattan and the Bronx and reduce service across four lines in Brooklyn and Queens.

Last week, M.T.A. officials said they would only consider cutting service if health officials advised it or ridership continued to drop.

Other cities across the country have already begun to slash service. This week, officials in Washington D.C., Boston and Philadelphia reduced public transit service as school closures and restrictions on public gathering ground cities to a standstill.

Amtrak, the nation’s passenger railroad, also reduced its service, cutting the frequency of Northeast Regional and Acela trains that run along the East Coast by 40 percent.

The cuts come as ridership on public transportation nationwide have decreased significantly. New Jersey Transit, which operates a vast network of commuter trains and buses connecting New Jersey to Manhattan, said ridership had dropped 40 percent over the past week compared with the same period last year.

Last week in San Francisco, the Bay Area Rapid Transit District, which oversees the region’s commuter rail and bus network, appealed to Congress for federal funds to help make up revenue loss, which it estimated to be as much as $5 million a week.

Mr. Trump has said that the state of emergency he declared last week would help free up $50 billion to help states and localities cope with the coronavirus outbreak.

On Friday, the Federal Transit Administration announced that it would allow transit agencies in some states, like in New York, to shift federal funds reserved for infrastructure projects to operating expenses related to fighting the coronavirus, like disinfecting subway cars, to offer some relief.

But in his letter on Tuesday, Mr. Foye said that redirecting federal funds from upgrades and maintenance is both insufficient to cover the M.T.A.’s projected losses and threatens to plunge the system into disrepair.

Still, experts warn that the current crisis could force a fundamental rethinking of the M.T.A.’s recently adopted $54 billion plan to modernize the system’s antiquated equipment.

Advocates had hailed the plan as a much needed fix for a system that fell into such disrepair that Mr. Cuomo declared a state of emergency in 2017. At that time, only 58 percent of trains ran on time. Today, the rate is over 80 percent after major investments in signal upgrades and train maintenance helped reverse the system’s steep decline.

“There were questions from the beginning about whether the M.T.A. could implement this very large and ambitious capital plan,” said Maria Doulis, vice president of the Citizens Budget Commission, a watchdog group. “Now there are even larger questions about whether this can proceed given the M.T.A.’s finances.”

Without federal or state assistance, the transit authority has few other options to make up for the shortfall.

The authority could lean on its work force to fill some of the financial gap by suspending payments into workers’ pension funds or renegotiating labor deals. Or it could force riders to pay higher fares and slash service to cut costs. But that might keep riders away and also hamper the city’s overall economic health as it tries to recover from the pandemic.

“Workers won’t be able to get to jobs, people won’t help boost the economy. They will be feeling healthy but they won’t be able to go out and engage with the city,” said Jaqi Cohen, campaign director for the Straphangers Campaign, an advocacy group. “If the federal government does not step in, New York City cannot move forward, literally.”