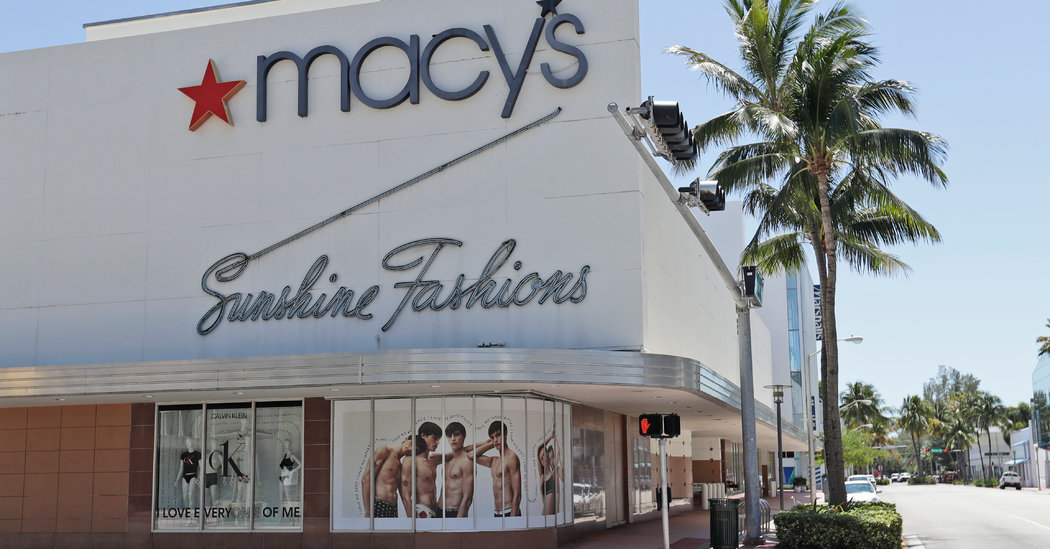 Macy’s, one of the biggest department store chains in the United States, announced an ambitious plan on Thursday to reopen all of its 775 locations, including Bloomingdales and Bluemercury, in the next six to eight weeks, the latest sign of how eager the nation’s largest retailers are to return to business.

The reopening plan will start on Monday with 68 stores in Georgia, Oklahoma, South Carolina, Tennessee and Texas. Macy’s will reopen another 50 locations on May 11. Macy’s temporarily closed its stores on March 18 because of the coronavirus pandemic, causing the majority of its sales to disappear.

Macy’s expects that its reopened stores will only bring in about 15 to 20 percent of their typical business at first and “slowly build” from there, the company’s chief executive, Jeff Gennette, said during a presentation. He acknowledged that it was an open question as to whether shoppers would return.

“We’ll see how they respond, and based on that, we’ll be a lot smarter,” he said. “So I’m going to know a lot more by Tuesday of next week.”

Mr. Gennette sought to strike an optimistic tone about the health of Macy’s business — he noted that April sales were “stronger than we expected” — but he acknowledged that the company was simply not built to sustain a full closure of its stores for a prolonged period.

The presentation from Macy’s illustrated what a pandemic-era shopping experience might look like. There will be new protocols for fitting rooms and beauty counters, associates will wear company-issued cloth masks and sometimes gloves, hand sanitizer stations will be placed by elevators and escalators, and plexiglass barriers will be installed at cash registers. Stores will be filled with signs reminding customers to maintain six feet from each other.

Only a limited number of fitting rooms will be open and items that have been tried on will not be returned to the sales floor for at least 24 hours. Returned items will also be held for 24 hours.

Macy’s beauty employees will offer “no touch consultations” and suspend any “spalike services.” Cards sprayed with fragrances will only be given out to customers at their request. Ear-piercing, bra-fitting and alteration services will be temporarily suspended. Dress shirts will not available to try on. And customers will need to use hand sanitizer before they try on jewelry or watches.

Macy’s made its announcement the same week that documents from Simon Property Group, the country’s biggest mall operator, outlined plans to reopen 49 shopping centers across 10 states between Friday and Monday. Macy’s said that roughly a quarter of the stores it planned to reopen on Monday were in Simon Property malls.

The mall operator had also outlined plans for new signage to manage traffic flow and spacing, and said that security officers and employees would “actively remind and encourage shoppers” to maintain a proper distance from others and to refrain from shopping in groups. It will also adust food court seating, shutter play areas and drinking fountains and tape off every other sink and urinal in restrooms.

Macy’s said that it would reopen stores only in markets where state and local governments said it was safe for nonessential retailers to return to business. In a presentation posted online, it also said that stores must be “financially attractive” and have “minimum viable staffing” to reopen. Staff will need to be trained on new health and safety routines. Macy’s furloughed the majority of its 123,000 employees in the past month.

Hundreds of Macy’s stores have been fulfilling and shipping online orders during the shutdown, and Mr. Gennette said curbside pickup would be added at additional locations.

However, putting safety measure in place can prove challenging. Large retailers that have remained open during the pandemic because they sell food and other items that have been deemed essential have had difficulties getting customers to follow social distancing measures, store employees say.

Walmart, for example, has placed arrows on the floor of its stores to direct the flow of customer traffic through the aisles and prevent people from passing too close together as they shop.

But Ruby Ann Woolwine, who works at a Walmart in Deaborn, Mich., said many customers did not follow the arrows and crowding was still an issue. “People are coming into the store like it’s nothing,” Ms. Woolwine said in an interview this week.

Mr. Gennette closed the presentation by noting that Macy’s was still planning to hold its annual Fourth of July fireworks display in New York, as well as its Thanksgiving Day parade. There had been criticism of Macy’s for moving ahead with the fireworks show despite having furloughed employees. But Mr. Gennette said that it was a “misnomer” that such events lose money for the company, adding that Macy’s was working on how to hold the events safely.