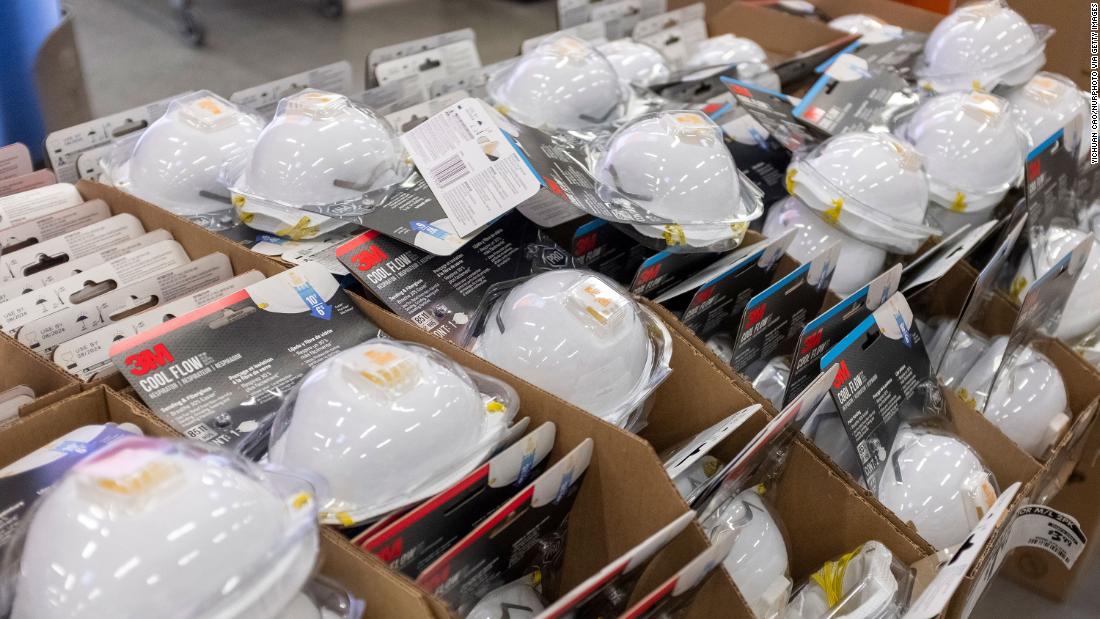 Ads for the masks have appeared on the websites of CNN, The New York Times, The Washington Post, and CNBC, over the past two weeks, according to data seen by CNN Business.

The ads often appear alongside news coverage of the novel coronavirus.

CNN, The New York Times, The Washington Post, and CNBC all show ads to their readers that are sourced through Google’s advertising platform Google Ads. Google pledged earlier this month to ban ads for face masks but the company has failed to successfully do so.

A Google spokesperson told CNN Business Friday that it works closely with publishers on putting in additional controls on their websites and has a dedicated task force trying to stop people running ads for items like face masks.

News organizations, like other websites, often use multiple different online ad systems on their sites. For instance, one section of a homepage might be reserved for ads sold directly to advertisers. Other parts of the homepage could feature ads from automated third-party services like Google Ads.

On Tuesday, Democratic Sens. Mark Warner of Virginia and Richard Blumenthal of Connecticut wrote to the Federal Trade Commission after their staffs found dozens of Google Ads for face masks on news websites.

The senators argued the advertisements contribute to the shortage of products essential to heath care workers on the frontlines of the United States’ coronavirus response.

Their findings included ads shown by The Washington Post and CNBC. CNN Business found a Google Ad for a face mask on CNN’s website independently. An ad for a facemask on The New York Times website was seen by Peter Kafka from the technology news outlet Recode on Saturday morning. Senate staff had documented how ads for hand sanitizers were also shown on The Times’ website.

A spokesperson for CNN confirmed the ad CNN Business found for a face mask on CNN’s website had come from Google Ads.

“Early in March, CNN proactively blocked facemask ads and the entire Medical Equipment category from appearing on our platforms. The ad in question came from Google and was inaccurately categorized which allowed it to be delivered to our site. When nefarious advertisers are identified, we work closely and quickly with our partners to block and classify them accordingly in their systems, as we did in this case,” the spokesperson said.

Angela Ran He, a spokesperson for The News York Times, told CNN Business that The Times has limited control over ads that are served through systems like Google’s.

“We continue to proactively block these ads, which we believe are disruptive to readers at a time when the world needs reliable information. Unfortunately, our levers for control as publishers are limited. We strongly encourage players in the programmatic ecosystem to take all available actions to filter and reject these advertisements,” Ran He said.

She said the company had been in touch with all of its advertising partners about the issues and added, “We will continue to explore new solutions as issues arise during this unique time period.”

Shani George, a spokesperson for The Washington Post, told CNN Business that the newspaper was working “vigilantly” to keep the ads off their website.

“We are in contact with Google and third-party partners to actively block these ads on their end. We have also employed keyword and image searches to find and discover these ads,” she said.

A spokesperson for NBCUniversal, CNBC’s parent company said, “NBCUniversal has taken and is continuing to take steps to eliminate these ads from appearing on any of our digital properties.”

A Google spokesperson told CNN Business Friday that it works closely with publishers on putting in additional controls on their websites.

“In the past few weeks, we’ve seen opportunistic advertisers try to run an unprecedented number of these ads on our platforms. We have a dedicated task force working to combat this issue and have removed millions of ads in the past week alone. We’re monitoring the situation closely and continue to make real-time adjustments to protect our users,” the spokesperson said.