Malls and retail stores are reopening. But shoppers may not come back 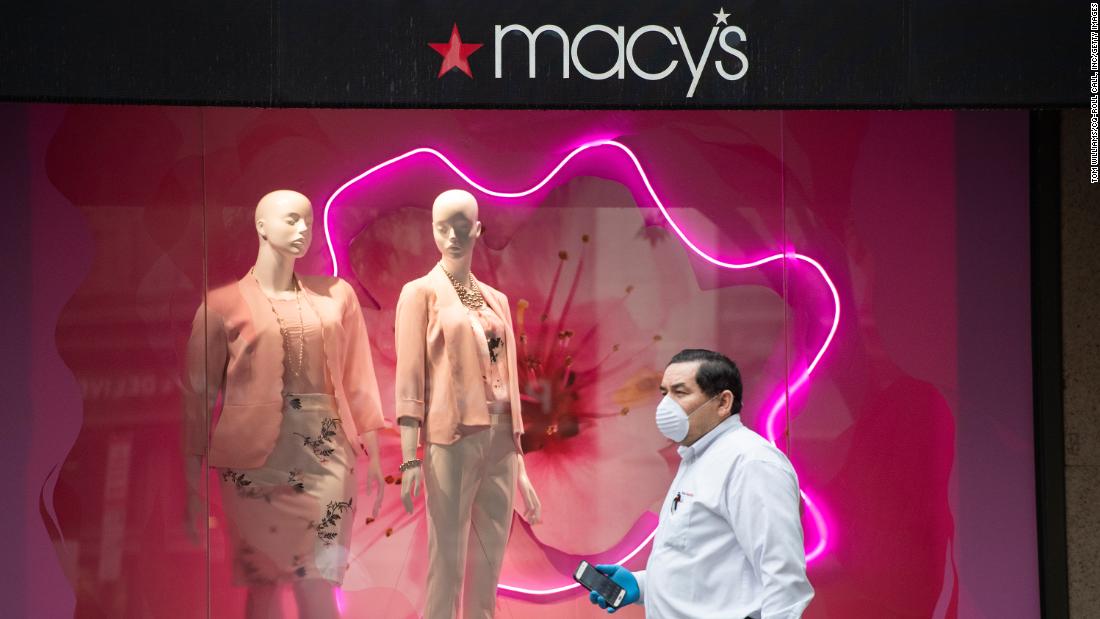 This week, mall giant Simon Property Group said it will reopen 49 malls, but it will block off play areas and stroller stations. Macy’s will reopen 68 stores, but customers can’t try on dress shirts.

At Best Buy, customers will have to schedule an appointment at the 200 stores that are reopening, but they must stay six feet from sales associates. And if a shopper wants to try a gadget in the store, a Best Buy employee must wipe it down first.

Companies are trying to strike the delicate balance between propping up their stalled businesses and implementing policies that protect their shoppers. Retailers are responding to mixed signals from public officials about the threat of the virus and a polarizing debate nationwide over how and when to reopen the US economy.

They are also trying to revive plunging sales. Retail sales fell 8.7% in March, the worst monthly decline on record.

Each big chain is taking a different approach and some national outlets like Nordstrom (JWN) and Gap (GPS) remain shut, signaling the deep divide among top retailers over how to emerge from the crisis.
Fear of contracting the virus in public areas and the limits on testing in the United States are barriers to getting Americans to feel comfortable returning to stores, public health and retail experts say. More than 60,000 Americans have died from the virus, and testing in the United States remains low.

“People are scared and most believe it is too soon for many non-essential stores to reopen. An open store does not mean it will have shoppers,” said Matthew Freeman, associate professor of environmental health and epidemiology at Emory University.

Cowen research surveys released last week found a “general lack of confidence among consumers in returning to key business industries,” including retail. Nearly 50% of shoppers plan to shop in stores for clothing after the coronavirus, but say they will avoid the dressing rooms, according to surveys by Jefferies.

Joe Bell, spokesperson for mall owner Cafaro, which on Wednesday reopened Governor’s Square Mall in Clarksville, Tennessee, acknowledged that some customers will choose to stay away from the mall out of fears of contracting the virus.

“There is a segment of the population that has become quite frightened,” he said. “They are going to stay home and continue worrying about catching the virus.”

Despite uncertainty, malls like Governor’s Square and retailers are moving ahead with reopening. “There is a lot of pent up demand,” Bell said of customers. “People are going stir crazy.”
One of the biggest developments this week came from Simon (SPG), the largest mall operator in this country. Its plan to reopen 49 malls and outlet centers across 10 states by May 4 may influence smaller property owners to reopen.

Simon’s malls will look dramatically different, however. It will provide CDC-approved masks and individual sanitizing wipe packets at no charge to shoppers who request them, and provide temperature checks using infrared thermometers. It will take its employees’ and contractors’ temperatures, require them to wear masks and limit customers to one person per 50-square-feet.

There will be social distancing markers throughout the mall. Food court seating will be limited. Reusable trays or silverware won’t be used. In bathrooms, every other sink and urinal will be taped off.

Still, some public health and retail analysts say the safety measures Simon and other malls have outlined do not go far enough.

Peter Raynor, professor of environmental health studies at the University of Minnesota, said Simon’s plan to limit occupancy to one person for every 50 square feet of floor space “seems like far too many people.”

“You would have a hard time maintaining your physical distancing with that density,” he said.

Even public officials in Indianapolis, where Simon is headquartered, have expressed concerns about its plans.

“To open up a large retail establishment would just increase our numbers dramatically, put other citizens at risk considerably, and it may undo all the good work we have put in place related to our shelter-in-place and stay-at-home philosophy,” Dr. Virginia Caine, director of the Marion County Public Health Department, told the Indianapolis Star.

Retailers moving ahead with reopenings are not entirely sure what to expect from shoppers.

“Retailers are preparing for new processes, consumer behaviors and legal requirements or restrictions, where there was once no playbook,” the National Retail Federation, an industry group, said in a letter to the Trump administration this week.
Macy’s (M) will limit the number of customers allowed inside the 68 stores that are reopening and install social distancing signs and markers. Customers will be required to use hand sanitizer before trying on jewelry or watches. Macy’s has suspended ear piercings, bra fittings and tailoring services.
“We are creating an environment that enables our customers and colleagues to shop and work with safety, confidence and peace of mind,” Macy’s said in a presentation Thursday. The company hopes to have more than 500 stores open by mid-June.

JCPenney (JCP), which is on bankruptcy watch, reopened seven stores Thursday. More than a dozen stores are open for curbside pickup as well.
On Thursday, Tapestry (TPR), the parent company of Coach and Kate Spade, said it will reopen approximately 40 stores in North America with only contactless curbside pickup.
Not every big chain is reopening, however, even in places where local or state leaders have lifted restrictions. Kohl’s (KSS), Nordstrom (JWN), Gap (GPS), TJX (TJX), Bed Bath & Beyond (BBBY) and others are sitting out for now. They say they are waiting for more direction from government officials.

“It’s a very fluid situation, so it’s too early to give precise timings for full re-openings,” said a representative of Bed Bath & Beyond. “We will continue to take guidance from government and public health officials and build on the safety measures we have in place” for home delivery.