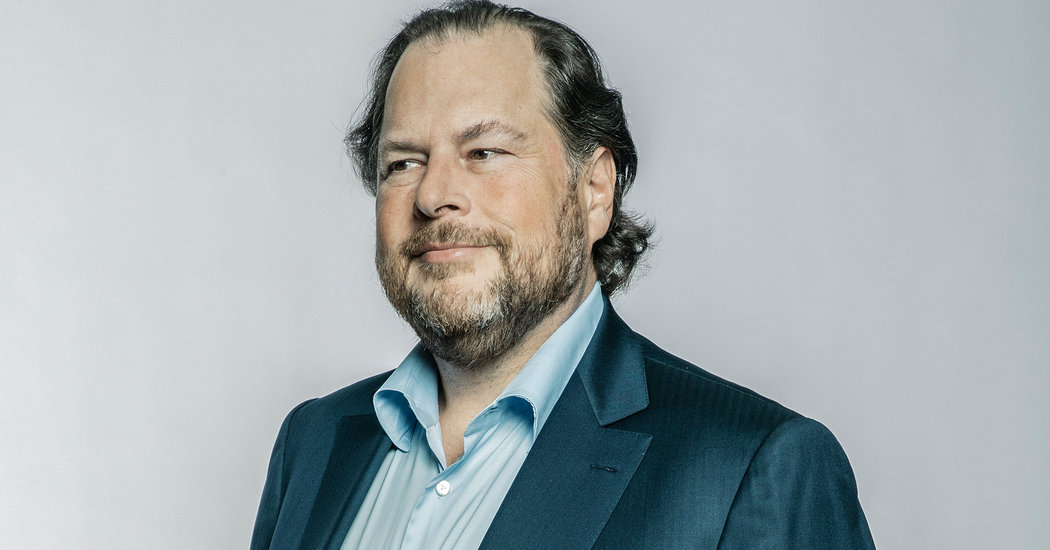 Sam Hawgood, the chancellor of the University of California, San Francisco, was getting concerned.

It was March 19, coronavirus cases in California were rising at an alarming rate, and U.C.S.F., one of the Bay Area’s major medical providers, was already running perilously low on personal protective equipment.

The university’s usual suppliers in the United States were short on masks and face shields, and there was no sign that the State of California or the federal government was coming to the rescue. “The supply chain had really dried up,” Mr. Hawgood said.

So Mr. Hawgood called Marc Benioff, the hyperconnected billionaire who is a founder and the chief executive of Salesforce.

In some ways, it was the natural call to make. Mr. Benioff gave the university $100 million to build a children’s hospital in 2010 and remained a major benefactor. But there was no reason to think Mr. Benioff, who runs an enterprise software company, could quickly muster a supply chain for personal protective equipment, especially during a global pandemic.

Nonetheless, that phone call set off a frenzied effort by Mr. Benioff and his team that drew in major companies like FedEx, Walmart, Uber and Alibaba. In a matter of weeks, Mr. Benioff’s team spent more than $25 million to procure more than 50 million pieces of protective equipment. Fifteen million units have already been delivered to hospitals, medical facilities and states, and more are on the way.

The relative ease with which Salesforce acquired so much protective gear stands in sharp contrast to the often chaotic government efforts. While states have had to compete against each other for scarce supplies and the strategic national stockpile of protective gear is depleted, Mr. Benioff and his team simply called up their business partners in China and started writing checks.

Other Silicon Valley executives, including Tim Cook of Apple, have also tapped their connections to help get needed supplies to hospitals. Jack Dorsey, chief executive of Twitter, pledged $1 billion to fight coronavirus. And many individuals and companies with vested interests in China have begun similar campaigns.

After Mr. Benioff got off the call with Mr. Hawgood on that Thursday, he called Daniel Zhang, chief executive of Alibaba, the enormous e-commerce marketplace. Last year, Salesforce and Alibaba announced a partnership meant to give Salesforce customers better access to the Chinese market, and teams from the two companies had been working closely.

Mr. Benioff told Mr. Zhang that U.C.S.F., an institution he cared deeply about, was in need. Mr. Zhang said he would help.

In San Francisco, Mr. Benioff tapped Ryan Aytay, one of the chief executives of Quip, a Salesforce productivity tool, to lead the effort. When Mr. Aytay reached out to his contacts at Alibaba that same day, they had already received the message from Mr. Zhang.

Within hours, the teams from Salesforce and Alibaba began collaborating, with the Alibaba employees identifying trusted suppliers who might be able to fulfill Salesforce’s requests.

Mr. Aytay got in touch with Mr. Hawgood, who said that U.C.S.F. needed masks, gowns, face shields and swabs. With Mr. Benioff’s approval, Mr. Aytay realigned his 25-person team to focus exclusively on the effort and brought in colleagues from other Salesforce departments.

Buying the gear was one thing, but getting it to the United States would be another. “Initially, I thought we were going to be able to use the U.S. military to bring it in,” Mr. Benioff said. “That was naïve on my part.”

Realizing he would need to charter planes and trucks, and hoping to speed things along, Mr. Benioff reached out to Fred Smith, the founder of FedEx, who put the Salesforce team in touch with his son, Richard Smith, a high-ranking FedEx executive.

In San Francisco, Mr. Aytay and his team decided to buy only from companies that someone they knew well could personally vouch for. “Setting up a trust network was very important,” Mr. Aytay said.

By March 22, the Salesforce team identified the first promising tip. The Jointown Pharmaceutical Group, a large Chinese company, had 500,000 surgical masks in a warehouse in Los Angeles.

But when Mr. Aytay called the Jointown office in China, no one there spoke English. Mr. Aytay had a member of his team who spoke Mandarin call back and negotiate the deal, and they soon agreed to buy all the masks for $300,000. The money was wired directly from Mr. Benioff’s family office that day.

Three days later, on March 25, the masks arrived at U.C.S.F. on trucks that FedEx provided at a discounted rate.

Once it was apparent that the Salesforce team could obtain and deliver supplies, they took steps to formalize their efforts and set a lofty target.

“We did the math when we started, and thought we were going to acquire a billion pieces of P.P.E.,” Mr. Benioff said.

The Salesforce team set up a website, www.1bppe.com, (the b is for billion) to obtain leads and give Mr. Aytay a new email address, since his Salesforce inbox was overloaded. They set up a daily meeting with U.C.S.F. to monitor progress. And they gave their team a name: Maskforce.

On Friday, March 27, Mr. Benioff joined a weekly call organized by the Business Roundtable, a lobbying group. With about 100 other chief executives on the line, he described his efforts and said that if anyone wanted to help, or knew of hospitals that desperately needed supplies, they could call him.

Soon after that, Mr. Benioff got a text from Virginia M. Rometty, the former chief executive of IBM, who said that hospitals in New York were in dire need of equipment. Mr. Aytay and his team had been buying more gear in China, and within days, a 747 was on its way to New York, full of medical supplies.

But when the plane landed, Mr. Aytay’s contacts at the Federal Emergency Management Agency and in New York said that instead of going directly to hospitals, the equipment should be sent to a warehouse in Albany where New York State was coordinating distribution.

There were other setbacks. On March 26, the Salesforce team secured two million surgical masks from a source in Shenzen, China. But on their way from the warehouse to the airport, 1.5 million went missing.

“They were sold right off the truck,” Mr. Aytay said. “It was the Wild Wild West.”

(The supplier ultimately fulfilled the order.)

Once, Mr. Aytay got a call from a friend who had found 9,500 KN95 masks made by 3M in the Bay Area. Within hours, the masks arrived at Mr. Aytay’s house. He wrote a personal check for about $40,000 to pay for them, and he hired a driver who sometimes takes him to the airport to pick them up and distribute them to local hospitals.

Their work was being noticed.

On March 31, Mr. Aytay spoke with California Gov. Gavin Newsom and shared his list of suppliers. The next week, President Trump thanked Salesforce for its donations during his daily press briefing.

At one point, Mr. Aytay was in his garage talking to an Irish supplier when the supplier asked him to hold. When he came back on the line, he had patched in Bono, the U2 frontman, who wanted to collaborate.

The gear continued to arrive. A 747 loaded with protective masks and other equipment landed in San Francisco on April 2. The next week, Uber Freight donated four trailer trucks to help transport equipment from multiple locations to U.C.S.F.

On April 12, two planes landed in Chicago carrying 1.3 million pieces of protective gear that Salesforce, Walmart and State Farm had bought in China. Mr. Aytay’s team had been in touch with FEMA to identify emerging hot spots.

When the planes arrived, Walmart trucks picked up the gear and drove it to Michigan and Louisiana. “We wanted to get gear to underrepresented communities,” Mr. Aytay said.

In the last weeks, it has become apparent that early social distancing measures have worked in the San Francisco area, and U.C.S.F. is unlikely to need all the supplies that Salesforce delivered.

Now, faced with a surplus, the company and university are sending excess gear to hospitals and medical institutions with more acute needs.