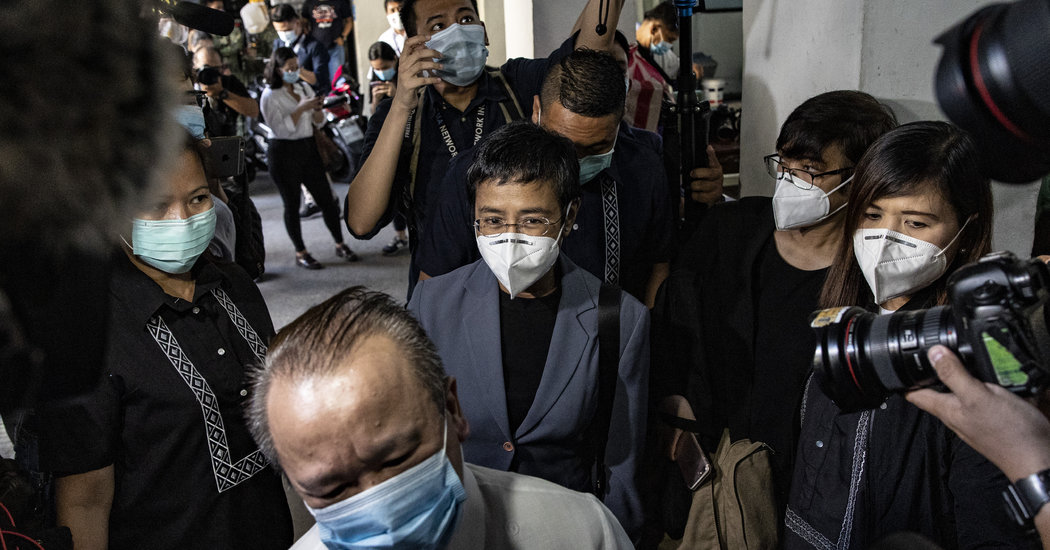 MANILA — A court in the Philippines on Monday convicted Maria Ressa, a veteran journalist and outspoken critic of President Rodrigo Duterte, of cyber libel, in the latest blow to press freedoms in the country.

The decision stems from a 2017 case filed against Ms. Ressa by prosecutors after a businessman disputed an article that he said inaccurately linked him to a top-level judge and tied him to the drug world. But the case was portrayed by Ms. Ressa and her news outlet, Rappler, as the Duterte administration’s latest attempt to brush back freedom of the press.

The court declared Rappler, the company, to have no liability. Ms. Ressa and Rappler employee Reynaldo Santos were both sentenced to between six months and up to six years over the charges. It is not clear whether they will go to prison, because the court may yet allow them to post bail.

Speaking last week by telephone, Ms. Ressa denied the charges and said they were an attempt to silence Rappler, which has been critical of Mr. Duterte and his bloody crackdown on drug dealers and users. “Corrupt, coerce, co-opt. You’re with us or against us,” she said. “If I’m convicted, then it’s codified into law.”

Regulators originally dismissed the charges because they related to a 2012 article. They were later overruled by more senior officials. Ms. Ressa has argued that prosecutors improperly applied the law retroactively.

The case is the latest in a series of moves by Mr. Duterte’s administration to intimidate the news media in the Philippines since he took office in 2016. In May, Mr. Duterte effectively shut down ABS-CBN, the most influential news broadcaster in the Philippines that in some far reaches of the country is the only access to news and information for citizens.

“Imagine an order by a regulatory agency telling CBS or CNN to shut down and they do? And it’s nationwide,” said Ms. Ressa last week.

Mr. Duterte once told reporters that “just because you’re a journalist, you are not exempted from assassination.”

Rappler and other news organizations have doggedly covered Mr. Duterte’s brutal war on drugs that has left thousands of people dead and led to the disappearances of many more. The campaign has drawn international rebuke for its brutality.

Rappler and Ms. Ressa have faced at least 11 government investigations and court cases. Ms. Ressa has been arrested on other charges including tax evasion and allegations that Rappler is foreign owned.

The National Union of Journalists of the Philippines said the verdict on Monday “basically kills freedom of speech and of the press.”

“This is a dark day not only for independent Philippine media but for all Filipinos,” the group said. “But we will not be cowed. We will continue to stand our ground against all attempts to suppress our freedoms.”

The Philippines offers a cautionary tale for the United States and many countries around the world that are currently led by populist leaders who have turned their focus on the media and accused reporters of “fake news,” Ms. Ressa said.

Ms. Ressa, a former CNN bureau chief and longtime journalist, created Rappler in 2012 with three female reporters who made names for themselves covering the People Power revolt that brought down President Ferdinand E. Marcos in the 1980s. They have described a political landscape in the Philippines that is tougher in some ways than the period under Mr. Marcos for journalists.

“To cut down press freedom in this way and to weaponize the law is a whole new level,” Ms. Ressa said. “It is something I haven’t seen since the days of Marcos. And to see it again is heart breaking.”

In recent years Rappler has been at the forefront of exposing internet misinformation in the country, which has become so rampant one Facebook executive called it “patient zero” in a global misinformation pandemic. Ms. Ressa has warned that the Philippines has long foreshadowed what will happen in the United States.

In 2016 ahead of the presidential elections in the United States, she met with Facebook executives to show them research that showed the social media giant needed to take action against fake news spreading on their platform. It was only after the election that Facebook requested more of her data.

“The reason why this matters is that where the Philippines goes, America follows. Take the weaponization of social media, we were the test case before America,” Ms. Ressa said last week. “Online violence leads to real world violence,” she added.