Markets: the ‘retail bros’ betting on a quick recovery from the pandemic 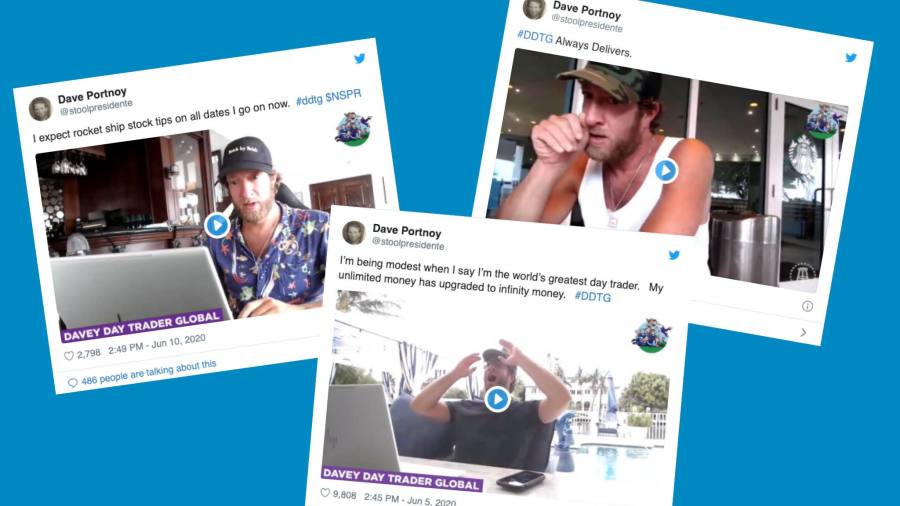 Dave Portnoy has two rules for making money in stock markets. Rule one is that “stocks only go up”, as he frequently reminds his 1.5m Twitter followers. Rule two: “When in doubt whether to buy or sell see Rule One.”

Since March 23, to the astonishment of many veteran fund managers, this investment thesis from the boisterous sports blogger turned have-a-go trader has held true.

Last Monday, while the World Bank soberly warned that the coronavirus pandemic was having a “staggering” impact on the global economy, which would shrink 5.2 per cent this year, the US benchmark S&P 500 stock index rattled back into positive territory for the year.

Stocks have largely recovered from the 30 per cent drop in March sparked by coronavirus, in a rally fuelled by the emergency response from central banks and governments around the world.

The tech-focused Nasdaq Composite index breached 10,000 on Tuesday for the first time. Only a slip-up on Thursday, when the S&P 500 suffered its worst day since the rally began and ended down almost 6 per cent, provided a reminder of the fragility of the market advance.

Unlike Mr Portnoy, now a frequent face on financial TV channel CNBC and described in a recent HSBC note as the “supreme leader” of retail market punters, many professional fund managers have been left reeling. How can stocks appear so rosy while the global economy suffers so much pain? As the Paris-based OECD group of rich countries also warned this week, wealthy countries have sunk into the deepest peacetime recession in a century.

“A lot of people are baffled by this,” says Kasper Elmgreen, the Dublin-based head of equity investment at Amundi, Europe’s largest asset manager. “We have seen something completely detached from fundamentals. I am a firm believer that equities are driven by cash flows and earnings. Something has to give.”

Mr Portnoy, with his website which includes a section dedicated to photos of women in bikinis in its “Smokeshow Of The Day”, has embodied a retail investing subculture that has taken root through the rally since March, coarsely railing against the “pinstripe suits” on Wall Street who he thinks begrudge his luck, or success.

In reality, traders like him are too small, even as a combined force, to move big stock indices like the S&P 500. They are passengers in the rush into riskier assets after central bank interventions shoved government bonds to unpalatable highs. But they have also begun to steer the rally’s excesses.

With their help, some of the stocks that have carved out the biggest gains are from companies that have failed. Shares in car hire specialist Hertz, which filed for bankruptcy in May, rallied by 1,500 per cent to their intraday peak on June 8, emboldening the group to look into selling more shares in a last-gasp bid for survival. JC Penney rose more than 500 per cent from a low struck after the retailer also filed for bankruptcy.

“These are bombed out stocks,” says Didier Saint-Georges, a managing director at French asset manager Carmignac. “No professional investor would want to hold these stocks. These are crazy valuations.”

‘A flight to crap’

Interactive Brokers is one of the clutch of online trading platforms that is providing access to markets for a new wave of bored sports punters missing their usual matches and races, and furloughed workers having a little fun with their $1,200 federal assistance pay cheques.

“You have heard of a flight to quality,” says Steve Sosnick, chief investment strategist at the Connecticut-based firm. “How about a flight to crap? You’re seeing a speculative fervour.”

The boom in new sign-ups, which in March was running at three times the average of the past two years, is “something we’ve never seen before”, says Christopher Larkin, a managing director at ETrade, another of the big online brokerages.

The recovery in stocks has been uneven. In the US, it has been dominated by tech stocks, taking weeks to spread out into other sectors. European markets remain far below their starting point for the year — nearly 20 per cent weaker in the case of the FTSE 100 and around 15 per cent for the Euro Stoxx 600.

By the end of this week, some of the fervour in the US was looking misplaced. A grim economic outlook from the US central bank on Wednesday acted as a reminder that a rapid and robust recovery from the shock of coronavirus shutdowns is an optimistic ambition. In the resulting market pullback, some of the stocks most favoured by users of the Robinhood trading app in the US were hardest hit.

How seriously this strains the nerve of both professional and amateur investors will be key. “The test is how resilient the market is to a price reversal,” says Eric Lonergan, a macro fund manager at M&G Investments.

Mr Portnoy claimed in his daily online broadcast on Thursday to be unfazed. “Let’s get fucking nuts,” he blasted, clapping his hands. “I’m ready. Are you ready? We’ve been down three days . . . but I’m so much smarter than the average human that I’m always nine steps ahead. Let’s see how low we can go today and then let’s fucking jump, let’s strangle these people out.”

This machismo may prove to mark the top of the wave of optimism that took hold in late March, when one of the biggest rallies in most investors’ professional memory began. Even before then, central banks led by the US Federal Reserve had already cut interest rates to historic lows in a bid to save the virus-struck financial markets from disaster with limited effect.

But a final push, including promises to buy vast sums of debt, support almost every corner of the markets and a programme to cool the alarmingly strong dollar, finally did the trick. They neutralised the very real risk of meltdown in the financial system itself, helping to prevent a string of bank and fund failures on top of what was already a global health and economic crisis.

Like national governments in the US, UK and elsewhere, central banks had learnt from the experience of 2008 that reacting quickly and forcefully and showing unlimited capacity to absorb shocks is more effective than agonising over crisis responses and fretting over unintended consequences.

Central bankers “are superheroes and they are not letting up”, says Gregory Perdon, co-chief investment officer at private bank Arbuthnot Latham. In the process, they have created an intense fear of missing out on stock market gains. “We completely underestimated that,” says Mr Perdon. “A lot of professional investors did.”

The question is how long the life support from monetary and fiscal policymakers can counteract the brutal impact of a global recession and keep markets afloat, particularly if millions of the workers around the world who have been laid off do not get their jobs back. If all the stimulus succeeds only in supporting assets held by the rich and fails to deliver long-term succour to ordinary workers and taxpayers, economists worry that the whole exercise could well be deemed an ugly mistake.

In the shorter term, investors do not yet know when, if ever, global air travel and tourism will fully recover. They do not know whether the virus will reassert itself in second and third waves. They also do not know how companies will repay the record-breaking sums they have borrowed in the bond markets to keep themselves alive through the crisis. The candid among them admit they have no clue how earnings will perform this year or next.

Politics also form a challenge to corporate earnings and by extension, to stocks. The public mood does not appear open to having ordinary households bear the tax burden to pay for the vital virus response. Instead, corporate taxation is likely to rise. Manufacturing costs are also likely to head higher, as companies rethink the logic of cheap overseas production.

Even so, focusing on positive news has its virtues, and having been humbled by the rebound since March, fund managers are reluctant to call an end to the rally now. Economies are opening back up, albeit tentatively. Countries across Asia and Europe are holding their pandemic death rates down.

“What do you do when you just don’t know?” says Mr Saint-Georges at Carmignac. “It shortens your investment horizon. If you don’t know what’s going to happen next year, then you focus on what’s happening right now.”

This has proven to be a reliable tactic for retail traders. Frank Costley, 23, who manages a store that sells protein powder and other supplements on the outskirts of Detroit, says his previous attempts to make money out of stocks had “blown up”. But the coronavirus bounce back, aided by “Daddy Powell” — his description of Federal Reserve chief Jay Powell — has been different.

One of his latest bets was on Luckin Coffee, the US-listed Chinese rival to Starbucks that was halted from trading on the stock market in April after an accounting scandal. Shortly before it did, Mr Costley bought the stock and made a small gain in a brief surge.

“The one thing I’ve learnt”, he says, “is that right now in the stock market, a company’s health does not correlate with the stock price one bit.”