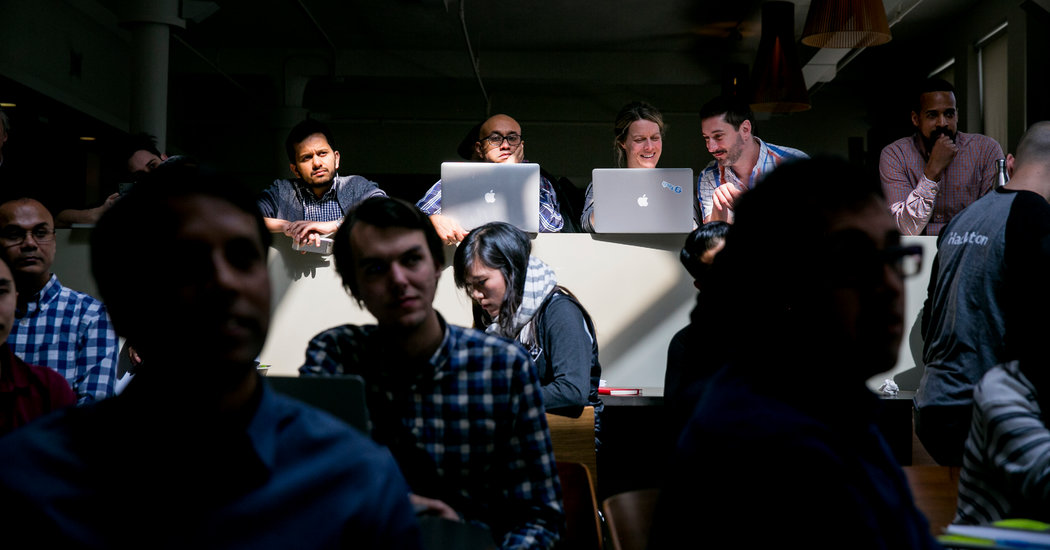 On the afternoon of May 14, Joanne Patten sat down at her computer in her home in Houston and logged in to a Zoom call with her employer, WW International, the company formerly known as Weight Watchers.

She listened as her boss, reading from a script, said she and the other employees on the Zoom call were being fired, effective when the three-minute session ended. It was one of numerous Zoom calls that occurred simultaneously across the country, resulting in the firing of an undisclosed number of WW employees.

“I was like, what just happened?” said Ms. Patten, 59, who was a part-time employee for nearly 11 years. “I put a call into my territory manager and said: ‘What was that? Are you kidding me? That’s how you’re going to fire me after all of these years?’”

For employees of WW, the mass terminations were especially painful because in recent years the company, under its chief executive, Mindy Grossman, and its high-profile investor and board member Oprah Winfrey, has moved from focusing on weight loss to a more full-on embrace of the broader wellness movement. In 2018, the company changed its five-decade-old moniker from Weight Watchers to WW and introduced the slogan “Wellness That Works.”

“This is supposed to be a caring, wellness corporation,” said Ms. Patten, who said she would have preferred to be let go in a one-on-one conversation with her boss. “The way they did it, it was just heartless.”

Nick Hotchkin, the chief financial officer for WW, declined to say how many employees were fired through the Zoom calls; the company had more than 17,000 employees at the end of last year, most of them part-time workers.

“It wasn’t practical to have all of the conversations be one on one,” Mr. Hotchkin said. He added that employees had been encouraged to reach out to their managers for follow-ups after the Zoom meetings.

In late April, WW announced plans to cut $100 million in costs because of the coronavirus pandemic. The firings and likely permanent closures of some locations are part of those savings, Mr. Hotchkin said.

“Even as we start a phased reopening of some of our locations, we know our business will continue to be impacted by this crisis,” he said. “That was the context in which we decided to restructure our studio business, and make substantial changes to our corporate structure and work force.”

Ms. Patton and other employees said the wellness strategy adopted by the company in recent years had not been embraced by some longtime members who, like millions of people over the years, had signed up to lose weight.

The company said it had not seen any spike in cancellations. In the first quarter, which ended in March, subscribers to its higher-cost studio and app plan fell 5 percent while subscribers for its less-expensive app-only plan rose nearly 16 percent.

Before the pandemic hit, about a quarter of the company’s members were paying $44.95 a month for access to workshops in its 800 branded studios or 2,500 locations like community centers, places of worship, hotels and other spaces. The other subscribers pay $20.95 a month for WW’s app. The company had been making its digital platforms a priority, and Mr. Hotchkin said it was accelerating that shift.

Weight Watchers became a global sensation after its founding in 1963 by Jean Nidetch, a housewife from Queens. Millions of people turned to its programs to lose weight.

The program’s system of points — three for a boneless, skinless chicken breast or 10 for a chocolate frosted doughnut — gave them a road map to follow when eating. The group meetings and weigh-ins provided support and accountability.

“I believe in the program because it worked for me,” said Jennifer Remedi, a mother of three from La Grange, Ill., who joined in 2000 and lost 70 pounds in 10 months. She then worked part time for the company for 19 years as a receptionist, or “guide” in WW parlance, at multiple locations, making $25 to $35 per meeting for the two or three meetings she worked on Saturdays. Members she had seen for years had become friends.

“Working for Weight Watchers was about community,” Ms. Remedi, 52, said. “It was a community of support, encouragement and friendship. You helped people achieve their goals and, ultimately, helped them to be healthier and happier. That’s why I stayed there.”

But the company struggled for years as consumers shifted away from diet programs, instead embracing natural foods and health. Competition from free or inexpensive apps, like the Under Armour-owned MyFitnessPal, also pulled customers away.

The company’s fortunes appeared to take a turn for the better in 2015 when Ms. Winfrey, who had frequently talked about her battle with weight on her television show, paid $43 million for a 10 percent stake in the company and joined its board of directors. The day of the announcement, shares of Weight Watchers doubled.

In the spring of 2017, Weight Watchers named Ms. Grossman, the chief executive of the Home Shopping Network, and a friend of Ms. Winfrey’s, its chief executive.

Ms. Grossman moved quickly to reposition the company as more of a lifestyle and wellness brand. In 2018, Weight Watchers rebranded itself WW, saying that while it remained a weight-management company, it would also strive to be the “world’s partner in wellness.”

Soon, group meetings that had been free form in nature and focused on topics like strategies for eating at Mexican restaurants — take only 14 tortilla chips from the basket, break them into small pieces on a napkin in front of you and do not touch the basket again — were replaced by broader themes like stress or exercise. Employees who had once asked members about their vacations or family had to strictly follow scripts.

“Members no longer had to weigh in, and we went from topics about what to do or how to handle the real world to these touchy-feely, warm-and-fuzzy topics that, at times, made me uncomfortable because I’m not a psychologist or a psychiatrist,” said Lynn Allred, 58, a teacher who worked part time at Weight Watchers meetings in California for 15 years before being fired over Zoom. She said attendance at meetings she worked at had dropped.

By the spring of 2019, WW’s stock had dropped below $20 a share after Ms. Grossman said marketing efforts that January — WW’s biggest subscriber month — had not connected with customers.

“I think it needed to be more weight-loss focus,” Ms. Grossman said in a call with Wall Street analysts in February 2019.

Since then, company executives say, they have been more successful in balancing WW’s wellness push with its weight-loss mission in its marketing, noting that the company hit an all-time high of five million subscribers at the end of last year.

“When this crisis hit, ironically, we had had a strong start to the year,” Mr. Hotchkin said. “We had introduced a new program and done a multicity tour with Oprah Winfrey, which had a great impact on the business.”