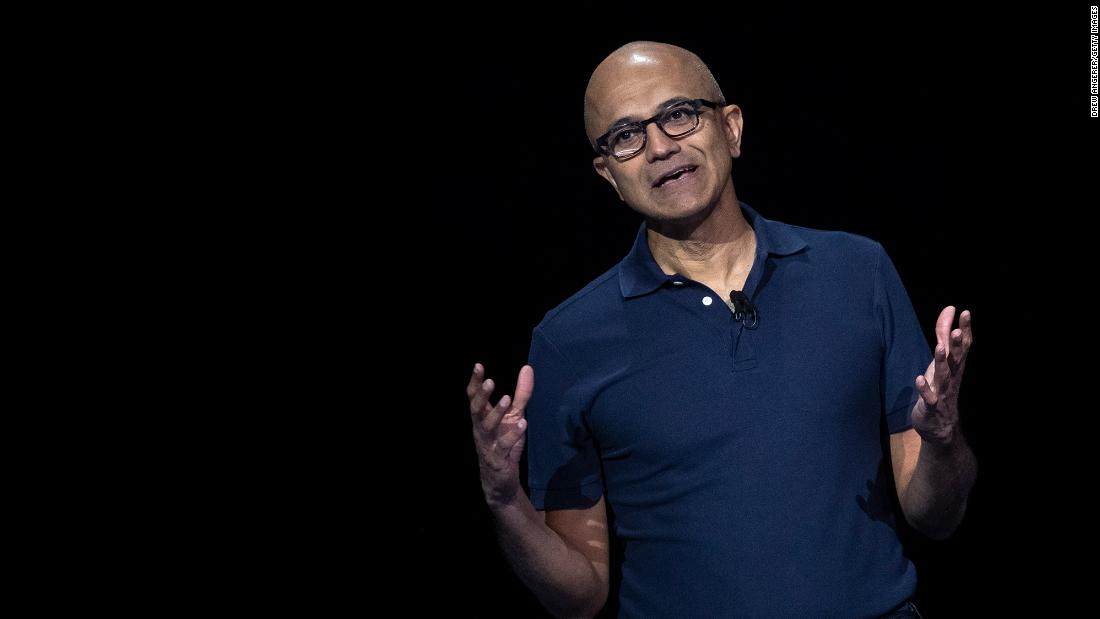 Especially in rural areas of the country, many lack access to broadband internet — and thus have struggled to participate in the remote learning, working and health care that have allowed others to adapt during the crisis.
A new initiative from Microsoft (MSFT) and farming cooperative Land O’Lakes aims to tackle that issue by bringing broadband and other services, such as free WiFi and digital skills training to rural communities in the 19 states where Land O’Lakes has farms.

“If you think about the rural community today, they are going to thrive if the entire community is able to get the education, the upskilling, the health and … ecommerce and other facilities directly reaching them where they are,” Microsoft CEO Satya Nadella said in an interview with CNN’s Julia Chatterley on “First Move” Wednesday. “That’s why broadband is such a fundamental right.”

The effort is part of a larger partnership that also includes deploying Microsoft technologies such as artificial intelligence, cloud and internet of things (IOT) on Land O’Lakes farms, which will give farmers access to real-time data to make key decisions and help them advance sustainable agriculture practices.

The new technology is expected to help farms better respond to disruptions such as climate change, trade issues and demand changes resulting from the pandemic, the companies say.

Land O’Lakes CEO Beth Ford said deploying such new innovations on farms — and ensuring that the benefits reach entire farming communities — is more than a matter of convenience.

“Vibrancy of our rural communities in partnership with a safe, affordable food supply and then creating jobs is critical. It’s a national security issue,” Ford said. “Technology is an enabler, for example, to close the healthcare gap … It is critical for the stabilization and the vibrancy of these communities that are critical to the United States and to our farm system and our food system.”

‘The hard work ahead of us’

The executives also discussed workforce diversity, another topic of key importance to Corporate America right now.
The death of George Floyd at the hands of police set off a wave of demonstrations for racial justice across the country this summer. The movement has included calls on corporations to ensure that opportunities, including roles in top leadership positions, are available to Black people and other people of color.

For Land O’Lakes, which is based in Minneapolis, Minnesota — where Floyd was killed May 25— the issue hits especially close to home, Ford said.

“The disparate outcomes for the African American and the Black community in Minneapolis is just unacceptable,” Ford said. “We have to continue to make progress, and one of the things we have to do better is we have to listen, we have to listen to the fear, the issues … Until we really understand that and take action, we’re going to have this kind of issue.”

Ford said Land O’Lakes has implemented unconscious bias training for its employees and is working on “being transparent about our diverse populations within our organizations.”

Currently, one member of the Land O’Lakes 16-person executive team is Black (one of two people of color), and 30% of the team are women. Land O’Lakes declined to provide information on the diversity of the company’s lower-level leadership.

At Microsoft, Nadella said his compensation is now tied, in part, to ensuring a diverse workforce.

“(Representation) needs to be reflected all the way to the top,” Nadella said. “So we now have commitments, whether it’s about race, and especially for the African American, Black and Latinx community, as well as gender … I, myself, am measured on it and paid on it.”

Microsoft’s 16-person executive team includes three people of color (including Nadella, who was born in India), no Black people and two women.

Both Nadella and Ford said they are working to ensure their efforts extend beyond just numbers.

“Representation can only be sustained if you have a culture of inclusion, so that’s an everyday practice where you have to work — every meeting, every promotion decision,” Nadella said.

Nadella also lauded the White House’s decision to rescind a rule that would have barred international students taking only online courses from staying in the United States. The policy could have had huge implications for the tech industry, which relies heavily on international talent.

“I’m a product of two great American things: American technology reaching me where I was growing up so that I could dream the American dream, and then the enlightened immigration policy that let me live that dream,” he said. “It’s in our self interest, quite frankly, to have an immigration policy that allows us to bring the best and the brightest, as well as show our humanity, because that is the soft power of this country.”

Correction: A previous version of this story incorrectly stated the number of people of color on the Land O’Lakes executive board.