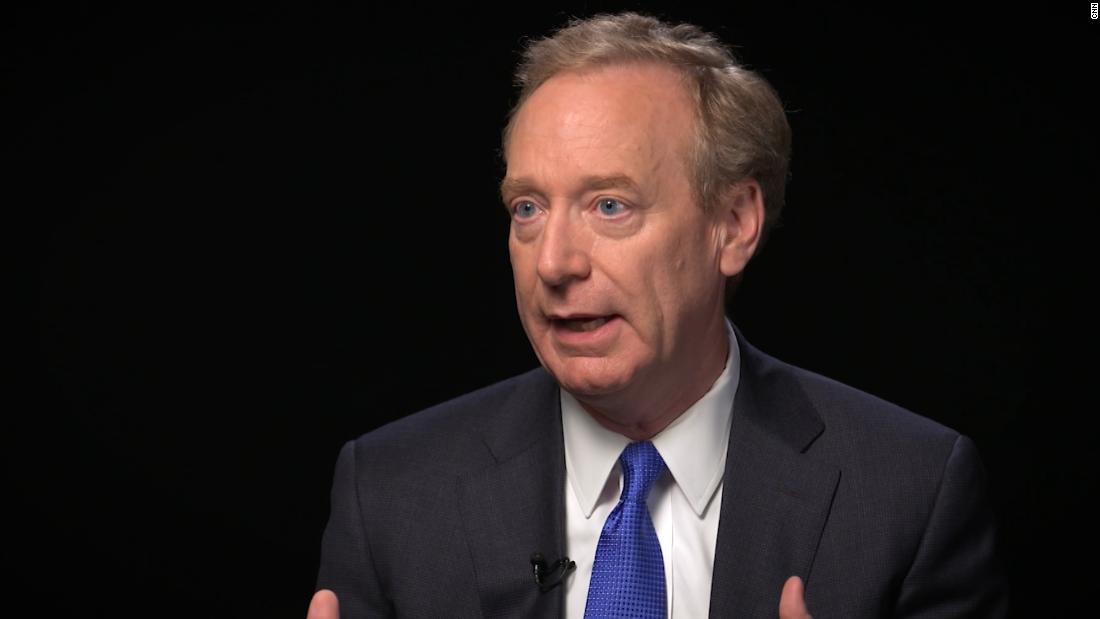 His comments came days after Microsoft (MSFT) and fellow tech giants IBM (IBM) and Amazon (AMZN) all rolled out limitations on plans to sell facial recognition technology in the wake of recent anti-racism protests. Smith stopped short, however, of saying the company would avoid selling to other federal agencies.

“We won’t allow our technology to be used in any manner that puts people’s fundamental rights at risk. Now I will say, the federal government is a broad government, there’s a lot more than law enforcement that’s involved.”

Smith urged lawmakers to develop federal regulations for facial recognition tools, adding to the growing pressure from Big Tech on Congress to replace a patchwork of state and local legislation with a nationwide law covering the cutting-edge tool.

“We need to start teasing this issue apart, to understand it better and move just beyond a binary conversation of: permit it or ban it,” Smith said. “And think about: what is the right way to regulate it?”

Smith has been calling for such regulation for years. Microsoft was involved in the passage of a state law in Washington that regulates the usage and testing of facial recognition technology, which Governor Jay Inslee signed in March.

Among the major concerns with facial recognition technology are that it has, in some cases, been proven to frequently misidentify people of color and women. More recently, fears of racial discrimination and police use of the technology for surveillance gained new urgency amid nationwide demonstrations over racial justice and police brutality.

Smith suggested that the Washington law could provide a blueprint for federal legislation.

“It says that you can’t offer facial recognition technology unless you make available your service for testing,” Smith said, adding that such a rule incentivizes companies to eliminate bias in their technology. He said the law also requires that police obtain approval from a court to use the technology, and that government cannot use it in situations in which citizens are exercising their first amendment rights, such as during protests.

Following Microsoft’s announcement that it will not sell the technology to police, President Donald Trump retweeted a post calling for Microsoft to be banned from federal contracts.

Smith said he hasn’t spoken to the President about the tweet, but that he doesn’t expect it will affect his engagement with the Trump administration, which he has advised on other issues such as reopening the economy.

Smith also addressed another hot topic in the world of Big Tech: the antitrust scrutiny currently being leveled at other companies including Apple (AAPL), Amazon and Google (GOOGL).

Smith said the barriers to entry for smaller tech firms are even higher than they were two decades ago, when he led Microsoft’s efforts to resolve its own antitrust controversies.

“If you look at the industry today, I think what you find is increasingly you’re seeing app stores that have created higher walls and far more formidable gates to access to other applications than anything that existed in the industry 20 years ago,” he said.

“(Other platforms) impose requirements that increasingly say there’s only one way to get on to our platform and that is to go through the gate we ourselves have created,” Smith said. “In some cases they create a very high price or a toll. In some cases, 30 percent of all of your revenue has to go to the tollkeeper, if you will.”

He said lawmakers in the United States and elsewhere should consider regulations for app stores, considering elements such as the rules around developing apps for certain platforms and the costs in place for doing so.