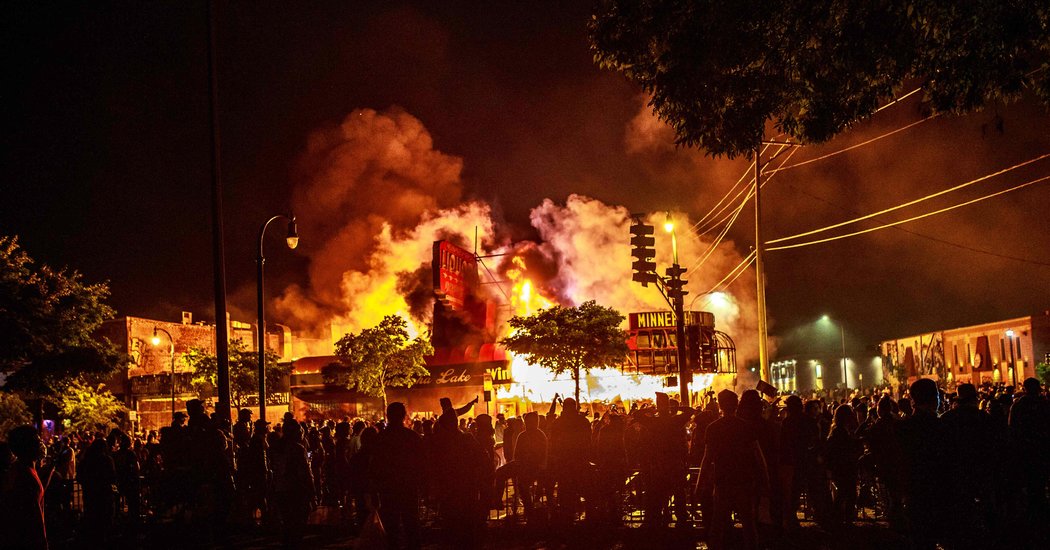 A CNN reporting team was arrested live on television early Friday while covering the protests in Minneapolis, an extraordinary interference with freedom of the press that drew outrage from First Amendment advocates and a swift apology from Minnesota’s governor.

The CNN crew, led by the correspondent Omar Jimenez, was released by the police in Minneapolis after spending about an hour in custody. In the moments before the 5 a.m. arrest, Mr. Jimenez could be heard calmly identifying himself as a reporter and offering to move to wherever he and his team were directed.

“Put us back where you want us, we are getting out of your way, just let us know,” Mr. Jimenez told the police officers, who were outfitted in riot gear, as the network’s camera broadcast the exchange in real-time. “Wherever you’d want us, we will go.”

Instead, he and his team — Bill Kirkos, a producer, and Leonel Mendez, a camera operator — had their hands bound behind their backs.

Their camera was placed on the ground, still rolling; CNN anchors watching from New York sounded stunned as they reported on their colleagues’ arrests.

It is common in autocratic countries for journalists to be swept up in arrests during protests and riots, but rare in the United States, where news gathering is protected by the First Amendment. Lawyers at CNN reached out to the Minnesota authorities, and the network’s president, Jeffrey A. Zucker, spoke briefly on Friday morning with the state’s governor, Tim Walz.

Mr. Walz was apologetic and told Mr. Zucker that the arrest was “inadvertent” and “unacceptable,” according to CNN’s account of the call. By about 6:30 a.m. local time, the crew had been released and was back on television, reporting on the protests and the unusual circumstances of their own detention.

“Everyone, to their credit, was pretty cordial,” Mr. Jimenez said of his interaction with the police officers after his arrest. “As far as the people that were leading me away, there was no animosity there. They weren’t violent with me. We were having a conversation about just how crazy this week has been for every single part of the city.”

Mr. Jimenez, who joined CNN in 2017, said he had also asked an officer for guidance on where the news media should be situated during the protests, which started in the wake of the death of George Floyd, a black man who died after being handcuffed and pinned by a police officer who pressed his knee onto his neck.

The detention of the CNN crew sparked denunciations from press groups and prominent journalists.

Christiane Amanpour, CNN’s chief international anchor, wrote on Twitter that “arresting journalists is the kind of thing that happens in dictatorships and authoritarian regimes. We live in a democracy.” Bret Baier of Fox News wrote that “this should never have happened. Period.” The head of PEN America, Suzanne Nossel, called the proceedings a “dystopian spectacle.”

A spokesman for the Minnesota State Police could not immediately be reached for comment.

On Twitter, the Minnesota State Patrol said: “In the course of clearing the streets and restoring order at Lake Street and Snelling Avenue, four people were arrested by State Patrol troopers, including three members of a CNN crew. The three were released once they were confirmed to be members of the media.”

That official statement was met with skepticism, in part because footage shows Mr. Jimenez and his team clearly identifying themselves as journalists, complete with press ID cards, before their arrests. On a morning call with network staff, Mr. Zucker, the CNN president, dismissed the State Patrol’s characterization of the incident with an obscenity.

“Thank goodness” a camera was there to record the incident, Mr. Zucker told his staff during the call, which was described by two people with knowledge of his remarks. Mr. Zucker went on to praise Mr. Jimenez’s “professionalism and poise,” calling the arrests “outrageous” and saying, “It’s hard to be prouder of what our team did this morning.”