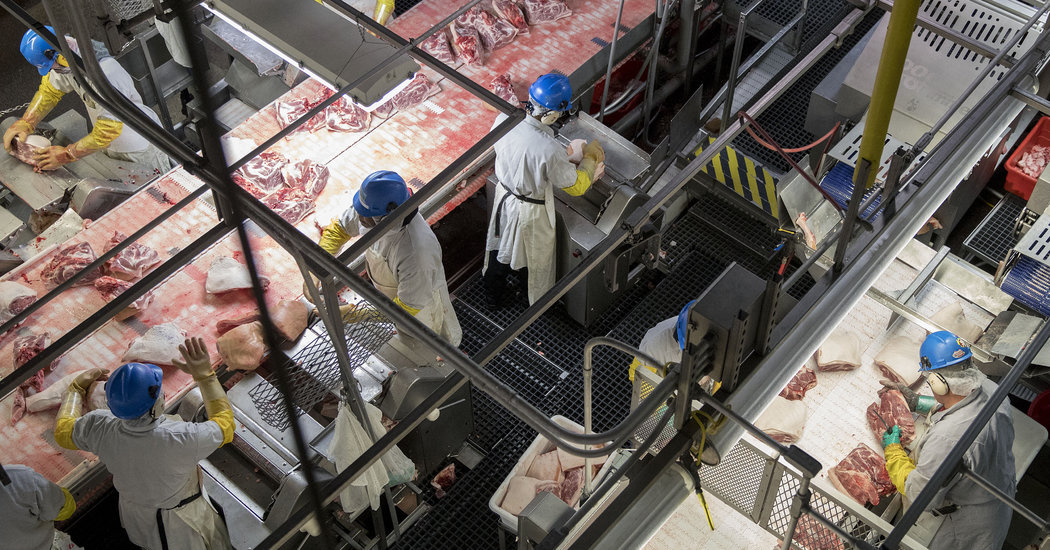 Workers at a Smithfield Foods pork plant in Milan, Mo., say that for years they have endured repetitive stress injuries on the meat processing line — and urinary tract infections because they had so few bathroom breaks.

But as the coronavirus pandemic has emerged, workers say they have encountered another health complication: reluctance to cover their mouths while coughing or to clean their faces after sneezing, because this can cause them to miss a piece of meat as it goes by, creating a risk of disciplinary action.

The claims appear in a complaint filed Thursday in federal court by an anonymous Smithfield worker and the Rural Community Workers Alliance, a local advocacy group whose leadership council includes several other Smithfield workers.

The complaint also seeks to test a novel legal question: whether health hazards at the plant present a public nuisance.

Coronavirus infections have emerged as a significant problem at meatpacking plants around the country, with some closing and many others operating well below capacity. At least 10 workers in meatpacking and three workers in food processing have died of Covid-19, leaders of the United Food and Commercial Workers union said on Thursday. About 6,500 employees either have contracted the virus, missed work because they had to self quarantine, or are waiting for tests or show symptoms, they said.

Officials of the union, which represents a vast majority of the workers in the pork and beef industries, said recent plant closings had reduced national beef production 10 percent and pork production 25 percent.

The court complaint about the Smithfield pork plant in Missouri, which is not unionized, says workers are typically required to stand almost shoulder to shoulder, must often go hours without being able to clean or sanitize their hands, and have difficulty taking sick leave.

“Since before the Covid-19, there was a problem with bathroom breaks,” said Axel Fuentes, the executive director of the workers alliance. But beginning in March, he said, “day after day, more people are concerned and scared about getting infected with the coronavirus.”

Mr. Fuentes said that some workers at the plant had shown symptoms like cough and fever but that few, if any, had been tested.

Smithfield said the complaint was without merit. “The health and safety of our employees is our top priority at all times,” said Keira Lombardo, the company’s executive vice president for corporate affairs and compliance. She cited a policy of not commenting on pending litigation, but she said the accusations “include claims previously made against the company that have been investigated and determined to be unfounded.”

The Centers for Disease Control and Prevention, which toured the South Dakota facility last week, recommended Thursday that Smithfield establish more social distancing barriers and possibly slow down the production line there to create more space between workers.

Beyond seeking to make workers safer, the complaint about the plant in Milan, Mo., is testing whether public nuisance law dating back hundreds of years can be used to protect workers on the job. The plaintiffs argue that Smithfield, by failing to take adequate safety measures, risks a coronavirus outbreak that could quickly spread to the entire community.

“It exists in any state — the idea of bringing the public nuisance,” said Karla Gilbride, a lawyer with Public Justice, a legal advocacy group that has worked with the Smithfield workers in Milan for several years and is helping to bring the complaint.

“If, whether it’s a private company or a private citizen, they’re operating something on their property and whatever they’re doing is unsafe and poses a danger to the entire community,” Ms. Gilbride said, “then the public has a right to safety and health.”

The lawsuit seeks to force Smithfield to change its practices at the plant but asks no monetary penalties or compensation. The case includes a second count under Missouri common law that requires employers to provide safe workplaces, but is being brought in federal court primarily because the parties to the complaint reside in different states. A public interest legal group called Towards Justice is also involved.

Thomas McGarity, a professor at the University of Texas Law School, said the public nuisance doctrine had been successfully applied more recently in environmental cases, including those where animal runoff or chemicals had polluted the local water supply. He said nuisance cases involving pathogens had historically been successful as well, though they typically involved pathogens that could be spread through insects or other animals.

In a Colorado case from the early 20th century, a judge ordered a defendant to stop operating a ranch in which he fed garbage and discarded meat to hogs, sickening them and risking the spread of disease throughout the community.

“The vector is not a mosquito, it’s a worker — that’s what distinguishes this case from a classic nuisance case,” Mr. McGarity said. “But if you think about the nature of this coronavirus and the fact that it you can be shedding the coronavirus without displaying any of the symptoms, it’s not so far different from a mosquito.”

He said that if the suit against Smithfield was successful, a judge would probably require the company to use the best available technology to reduce the risk of contagion, such as better protective equipment and spacing.

Mr. Fuentes, the director of the local alliance, said that before the pandemic, the question of bathroom breaks had been a top concern of workers.

Since the pandemic arrived, Mr. Fuentes said, the concern has shifted almost entirely to the risk of exposure and infection, especially once schools closed in the area. “After that, a lot of workers got really scared,” he said. “The workers said, ‘The kids are not going to school, but they’re making us go to work.”’

Several dozen workers signed a letter that was delivered to plant management during the week of March 30 complaining of cramped conditions and a lack of protective equipment and accommodations for sick leave. It cited the company’s policy of assigning workers a disciplinary point — a tally that can lead to dismissal — if they took a day off.

The letter asked the company to address these concerns and to slow down processing lines so that workers had time to cover their mouths while coughing or to clean their nose after sneezing.

The company later installed barriers between some workers on the line, but the complaint says the barriers, which hang from above, often aren’t low enough to shield their faces. The company also began providing masks last week and has carried out temperature checks. Its chief executive has said that Smithfield is following guidance from the Centers for Disease Control and Prevention and urged employees: “Do not report to work if you are sick or exhibiting Covid-19 symptoms. You will be paid.”

But according to the complaint, plant managers discourage workers from taking sick leave, and Smithfield has done little to address the other problems described in the letter.

And some company policies have added to safety concerns. In March, Smithfield announced that workers in Milan would receive a $500 bonus if they worked every shift they were scheduled for from April 1 to May 1. According to the complaint, this has given workers an incentive to show up “even when they are experiencing symptoms,” though the company later said that workers who missed time because of Covid exposure would still receive the money.