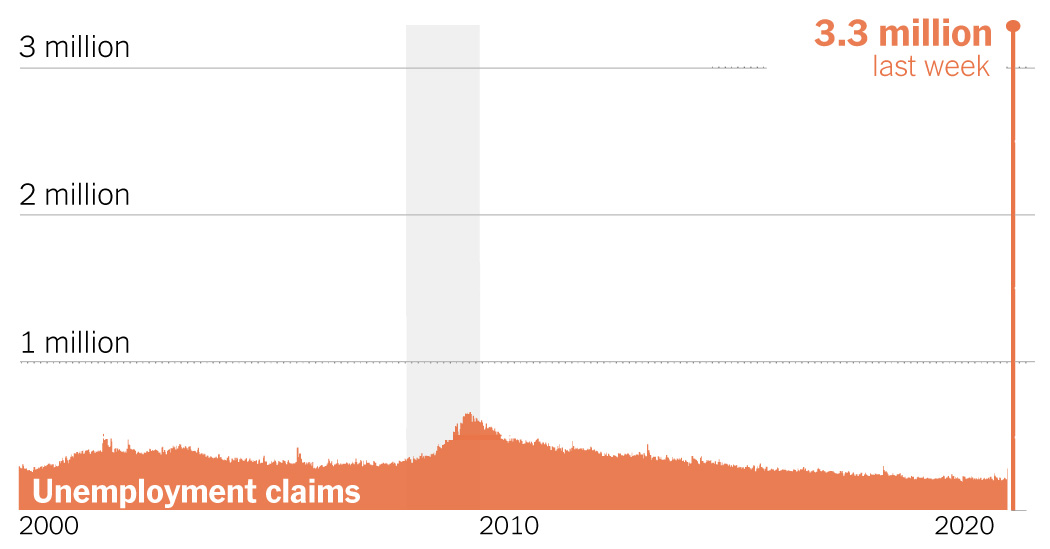 The Department of Labor reported on Thursday that 3.28 million people filed for unemployment insurance last week, confirming that the economy is rapidly transitioning from strong activity to an unwelcome hibernation because of the coronavirus.

That eye-popping number — more than four times higher than ever recorded, and a sharp rise from 282,000 last week — reflects the peculiar nature of this crisis.

This downturn is different because it’s a direct result of relatively synchronized government directives that forced millions of stores, schools and government offices to close. It’s as if an economic umpire had blown the whistle to signal the end of playing time, forcing competitors from the economic playing field to recuperate. The result is an unusual downturn in which the first round of job losses will be intensely concentrated into just a few weeks.

By contrast, a “typical” recession plays out over a period of many months, or even years. The usual delay reflects the reality that it takes time for businesses to calculate their latest revenue numbers, then to recognize that they’re facing something worse than just a few bad months, and then to decide whether to respond by trimming their work forces.

Today’s very different dynamics mean that comparisons of this latest number with previous recessions won’t yield much insight into the economy’s future.

Some simple numbers make the point. In the last recession, which began in December 2007, initial unemployment claims rose above their long-run average level (of 345,000) for five years. Summing up these extra spells of unemployment — that is, adding up the number of claims above 345,000 each week — suggests that the financial crisis led to around 26 million extra jobless claims in total.

It’s possible that these latest numbers signal that the United States is on the cusp of a similarly painful downturn in which an extra 26 million job losses will also occur, but this time at a more rapid rate of roughly 3.25 million per week spread over only eight weeks. But of course it could be far worse or, with fast progress on coronavirus, wind up being far better — it’s simply unknowable at this time.

According to a forecast driven by Google searches, jobless claims this week may be as high as 4.7 million, according to an analysis from the economists Paul Goldsmith-Pinkham from Yale and Aaron Sojourner from the University of Minnesota. The forecast is based on higher search volume at the state and national level.

It’s an economic hurricane, not a typical recession

Perhaps a better analogy for the current downturn is not past recessions, but rather a natural disaster like Hurricane Katrina in 2005. Like the coronavirus, it caused an almost immediate shutdown of one economic region.

Over this 14-week span, Hurricane Katrina led to a total of roughly 350,000 extra jobless claims in Louisiana. The overall United States work force is roughly 75 times larger than Louisiana’s. So if the nationwide coronavirus shutdown were to follow a similar trajectory, it would produce an extra 26 million jobless claims.

That would be on par with the effects of the 2008 financial crisis.

Hurricane Harvey, which hit Texas (and Louisiana) in 2017, offers a more optimistic comparison. Initial unemployment claims in Texas rose fivefold in the immediate aftermath of the hurricane, stayed high for an additional week, then over the next two weeks came down toward earlier levels. Within a month, the hurricane’s impact on these numbers had virtually disappeared. If the national economy were to follow that trajectory, the current surge in jobless claims would be very temporary, and the recession relatively mild.

As these two cases illustrate, early data from a highly synchronized economic catastrophe provide extremely imprecise signals about the depth of the ensuing recession.

Economic policymakers will have very little reliable data with which to track the current downturn over the coming weeks. That’s because the rapidity of this downturn amplifies the importance of idiosyncrasies in how economic data are collected.

The closely watched employment report — which yields the official estimate of the unemployment rate and nonfarm payrolls growth — is to be released in 12 days. But that report will look at surveys asking firms and workers about their labor market activity in the second week of March, which is before many job losses occurred. The first post-shutdown employment report won’t be available until six weeks from now, when the numbers for April will be reported on May 8.

Instead, policymakers will continue to focus on the initial jobless claims numbers produced by the Labor Department. But the government’s fiscal rescue package includes major changes to the unemployment insurance system, which will distort these numbers in hard-to-assess ways.

On the one hand, increasing the size of weekly unemployment checks will probably make some employers more inclined to furlough their workers, which could inflate the initial claims count. On the other, some parts of the rescue package are available only to employers who commit not to cutting staff, which could reduce the number of unemployment claims. It is also not yet clear how the Labor Department will report numbers from the newly created Pandemic Unemployment Assistance program, which offers benefits to some groups of workers who are not eligible for regular unemployment insurance.

All this will make it hard to compare initial claims numbers in coming weeks with recent data. Claims counts could fall even as the downturn intensifies, or they could rise even as the crisis abates.

Our official economic statistics simply aren’t set up to track a downturn that plays out over days and weeks, rather than months and years. Instead, policymakers will have to rely on scraps of real-time information, collected from credit card processors; sales and earnings numbers from individual firms; or even Google searches. It gets worse. The changes in economic life wrought by social isolation render even these relatively untested data less reliable, as it will be hard to disentangle shifts in how we shop from shifts in how much we shop.

Find your state below

As you look at what’s happening in your state, be aware that these numbers come with some pretty important caveats. In particular, this spike in joblessness is so large that many unemployment offices had trouble keeping up, and in some cases their phone lines and websites have been overloaded. These official numbers reflect the number of claims successfully filed, but the true number of people newly out of work and attempting to file may be much larger. Those who failed to file last week but successfully did so this week will increase the next set of numbers, due out next week.

In addition, when unemployment offices don’t file their numbers on time — and given the surge in applications, it’s likely that data collection is particularly chaotic at the moment — the Labor Department treats these missing data as if there were no jobless claims from that office. Therefore many of these numbers may be undercounts. Furthermore, counts of the number of people claiming benefits are affected by the number who are eligible, and this may be changing rapidly, as the impact of Covid-19 has led some states to expand who can claim unemployment insurance.