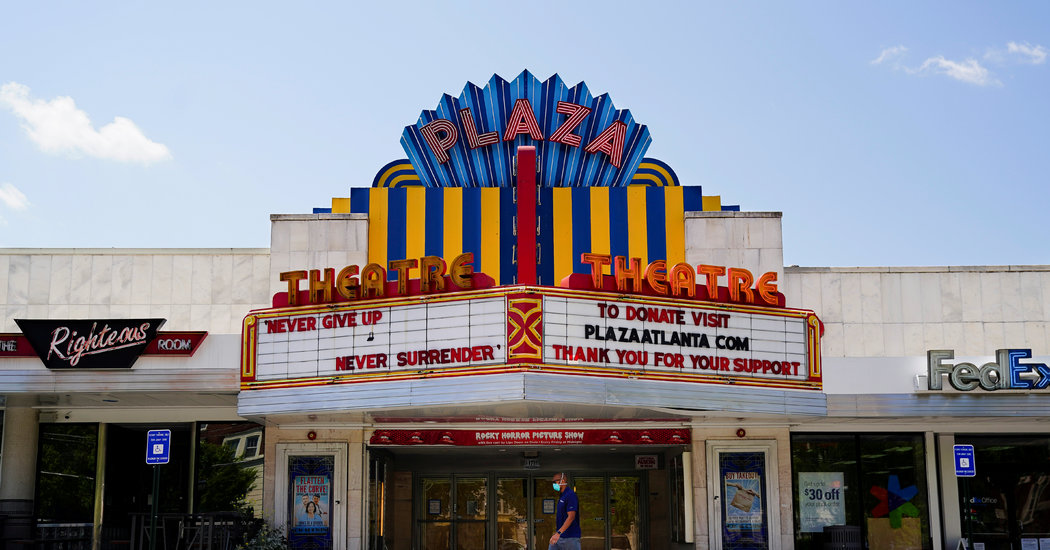 That one-two punch would be enough to draw moviegoers back into theaters that had been closed because of the coronavirus pandemic, multiplex operators believed, allowing Hollywood to salvage part of the blockbuster season and, perhaps, revive a pastime that has taken on symbolic importance for the American economy.

But some politicians want their popcorn now.

Some Republican governors are urging cinemas to reopen sooner rather than later, despite business and public health realities that make an abrupt relighting of marquees impractical, if not impossible. To help restart Georgia’s economy, Gov. Brian Kemp wants theaters to reopen starting Monday. Tennessee, where Regal Cinemas is based, plans to allow most businesses to reopen at the end of next week. South Carolina and Ohio are also restarting their economies. Texas and Florida are itching to do the same.

But movie theaters are worried about opening up too early. They don’t want to be lumped in with meatpacking plants and senior centers as hot spots for the virus. Already struggling financially, theaters fear that a too-soon return could stigmatize them as dangerous places to congregate. And with new movies from Hollywood not set to debut until the middle of July — at the earliest — opening too soon would only make operators spend money before they could truly recoup costs from patrons.

“Hell no, we’re not opening on Monday,” Chris Escobar, who owns the 485-seat Plaza Theater in Atlanta, said by phone. “When we do, it will not be because of political pressure. It will be because leading public health experts say our lives are no longer at risk.”

He added: “I want to be back in business right this second. But we’ve got to be smart about it. What happens if we open too soon and contribute to an outbreak? Traced to the Plaza Theater! You know what that would do to my business? I wouldn’t have one.”

Aubrey Stone, the chief executive of the Georgia Theater Company, which operates more than 200 screens in Georgia, South Carolina, Florida and Virginia, also said he will not open on Monday. More realistic would be a July start, should the virus comply.

“We are not going to reopen until our partners in distribution will be supplying us with a consistent supply of new films,” Mr. Stone wrote in an email.

The industry was heartened to be included in Phase 1 of President Trump’s broad federal guidelines to restart the economy, grouped with restaurants and houses of worship rather than with large concert venues.

Now the chains, which operate independently but consult one another on best practices, are spending their time determining what protocols should be established. Separating seating within auditoriums is one idea. Owners are also contemplating longer intervals between showings to allow for deeper cleaning, plexiglass partitions at concession stands, and primarily touch-free environments in which staff members wear masks and gloves and patrons don’t carry physical tickets. Hand sanitizer and wipes would be made available.

Theater companies are desperate to begin doing business again. They were in a delicate state even before the pandemic: Attendance has been on the decline — down 5 percent last year in North America to 1.24 billion — and competition, most notably from streaming services, has been on the rise.

Out of business for more than a month, chains like AMC and Cineworld are in particularly bad financial shape. Last week, AMC staved off bankruptcy by taking on $500 million in new debt, pushing its total to $5.3 billion. The new funding, AMC said, will allow it to withstand closures around the world until November.

But theaters are uneasy about rushing back for a number of reasons.

Publicly, theater operators have pointed to supply as the primary holdup. The major studios have postponed every big release planned for May and June — “Black Widow,” “Top Gun: Maverick,” “F9,” “Wonder Woman 1984” — leaving multiplexes with nothing to show even if they wanted to reopen. Because most summer films cost $300 million or more to make and market, studios need the majority of theaters to be open before releasing the movies. Bringing them out in staggered fashion in the United States is not an option, studio executives say, in part because of piracy concerns.

“Until the majority of markets in the U.S. are open, and major markets in particular, new wide-release movies are unlikely to be available,” the National Association of Theater Owners said in a statement on Wednesday.

“As a result, some theaters in some areas that are authorized to open,” the statement added, “will not be able to feasibly open.”

Behind the scenes, owners are working through a more complicated mix of considerations. Lawyers are trying to sort out what kind of liability theaters could face if audience members get infected with the virus. Some multiplex operators are discussing whether to require ticket buyers to be part of a loyalty program, collecting personal information so the company can assist authorities with contact tracing if needed.

Adam Aron, AMC’s chief executive, previously indicated that he would rely on public health officials to guide reopening. “The health and well-being of AMC guests and employees, and of all Americans, takes precedence above all else,” Mr. Aron said in a statement last month.

Mark Zoradi, the chief executive of Cinemark, the No. 3 chain behind AMC and Regal, told analysts on an April 15 conference call that “Cinemark is currently working toward a midsummer opening date, contingent upon health and safety regulations, as well as availability of studio content.”

Even with all the uncertainty, many are hoping that “Tenet,” Mr. Nolan’s film, will mark the real return of theaters. Mr. Nolan has been an impassioned advocate for preserving the moviegoing experience. In March, he wrote in The Washington Post that movie theaters were “the most affordable and democratic of our community gathering places” and urged Congress to include them in the federal bailout.

“When this crisis passes, the need for collective human engagement, the need to live and love and laugh and cry together, will be more powerful than ever,” Mr. Nolan wrote. “We don’t just owe it to the 150,000 workers of this great American industry to include them in those we help, we owe it to ourselves. We need what movies can offer us.”