My parents had the American Dream within their grasp, then gave it up and moved back to India. 25 years later, I asked them why 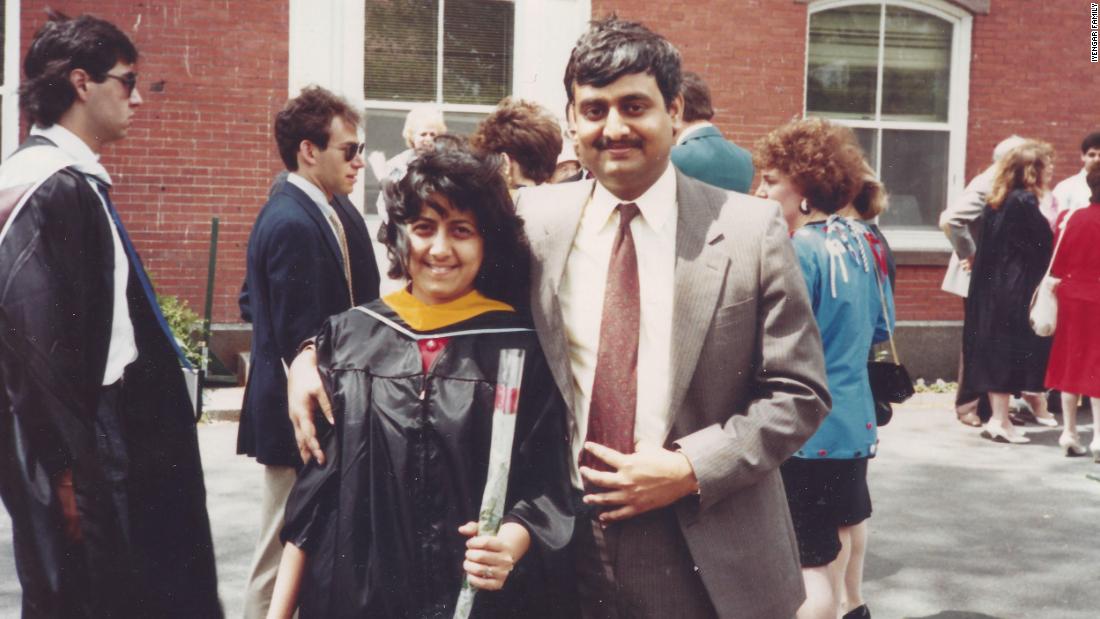 My dad, Partha, moved to the United States in the early 1980s to study; my mom, Jhumkee, followed soon after. They ended up staying for more than a decade before uprooting the family and moving back to India when I was four. My sister and I grew up in their hometown of Pune with US passports and came back every summer, enjoying, as the cliché goes, “the best of both worlds” and an extraordinary level of privilege.

So when I called my parents this time, I decided to also interview them — about their pursuit of the American Dream, their decision to give it all up, whether they had any regrets, and how their experience can help to understand this moment of tremendous turmoil for immigrants.

America: A land of opportunity, and ‘computers’

My father ended up in the US by process of elimination. He dreamed of being a pilot in the Indian Air Force but didn’t make the cut. He then went to college, got a degree in engineering, and made it to the final interview round for Hindustan Lever (now Hindustan Unilever) — the Indian subsidiary of global consumer brand Unilever (UL) — along with four other candidates.

“If I had got the Hindustan Lever job I probably would not have come to the US,” he said.

The company hired three of the final five candidates. He wasn’t one of them. He also didn’t get into any of the top Indian business schools. But at one of those school interviews in 1980, he ran into an acquaintance who was visiting from the US and told my dad he should think about getting into this “up and coming” field called computers.

“This friend asked: ‘Oh are you interested in hardware or software?'” my dad recalled. “I had no clue what he was talking about, what hardware is and what software is, so I said ‘Both! I want to do both!’ I was that clueless.”

That’s how, in 1982, my dad entered the alphabet soup that is the US immigration system. He came to the US on an F-1 student visa, pursuing degrees at two schools that offered him financial aid, before returning to India to get married. My mom joined him in the US in 1985 on an F-2 dependent visa.

“I was very excited,” she said. “It was my first time going out of the country.”

But there were also profound moments of homesickness in those early years. “Your dad had to completely stop listening to Hindi songs, poor thing, because the minute he put them on I would start crying,” she said.

My dad finished grad school with a job as an analyst at a defense subcontractor that made aircraft engine parts. At that point, he had one year to work in the country under the Optional Practical Training (OPT) rule.

“I knew that I had to impress them enough in that one year that they would be willing to do my H-1 process,” he said. “Back then this whole immigrant visa and all that wasn’t as big a known thing as it is now.”

A moment of uncertainty

About six months in, he gently broke the news to his employer that there was an additional process they’d have to go through to keep him for longer. Fortunately, the company agreed, hired an immigration lawyer, and in six months he had the H-1 visa, as it was called back then. By the end of 1989, he’d applied for and received a green card.

In 1986, the year my dad got his H-1, the US admitted 26,227 Indian immigrants overall, according to government data. Last year, Indians received 278,491 H-1B visas (including renewals) — more than 71% of the total. That’s been the case for years, skewed by the tech industry which has long relied on the visa program to bring Indian engineers to the US. But country-specific limits on green cards imposed in 1965 mean that tens of thousands of Indians applying for a green card this year won’t receive them until at least 2055 because of a huge backlog in petitions from India, according to a recent analysis of US immigration data by the libertarian think tank Cato Institute.

In the roughly three years that my dad was going through the now common work-visa-to-green-card process, my mom had switched from the F-2 visa to her own F-1 to do her Masters from Tufts University in Boston. She then joined tech company Pitney Bowes on her OPT, but only had to wait a few months since her green card was tied to my dad’s.

Now nearly all those avenues are under attack. Less than two weeks after suspending H-1B visas for the rest of this year, the Trump administration announced all students at US universities on F-1 visas have to leave the country, transfer to another university or risk being deported if their fall semester is being held online amid the pandemic.

“This very rocky situation that exists wasn’t there back then. There were uncertainties of the execution of the process, which is normal,” my mom said. “But [the notion] that the whole process can get an upheaval… that didn’t exist.”

The most precarious moment they faced was just before the green card arrived, when my dad’s company got acquired and planned to shut down the Connecticut plant where he worked. Had he still been on the H-1 and lost his job, he wouldn’t have been able to file for unemployment and would have had to leave the country.

“It was a little bit touch-and-go,” he told me. “Luckily it came in time.”

Soon after I was born, my dad decided to pursue another part of the American dream: entrepreneurship.

He left Gartner, the tech advisory firm where he would spend most of his career, to start his own firm, providing strategic consulting to US companies and also bringing consultants over from India to work on projects at those companies.

At that point, my dad had been in the US for almost 11 years and my mom had been here for eight, having also advanced in her career as a designer. They started to have what my dad referred to as “the itch.”

Many Indian workers increasingly choose to go back in a phenomenon known as “reverse brain drain.” Exact numbers are hard to come by, but the growing frustration and uncertainty over immigration policy may now be spurring more Indians to consider returning home. A recent webinar for Indians contemplating a return from the US called “Come Home and Build,” organized by venture capital firm Lightspeed India, got so many sign-ups the organizers had to expand their Zoom subscription.

In the early 90s, my parents witnessed a few friends who went to India, spent several months there and moved back to the US because it was too difficult to readjust to life back home.

A trip back to India for my first birthday made the decision clear. “We came back here and realized what kind of a life it will be with [our] parents aging and bringing up a child in this culture,” my mom said.

Still, my parents continued to vacillate on the decision for a couple years — during which time my sister was born.

By that point, India had liberalized its economy, opening itself up to the rest of the world. My dad sensed the opportunity and successfully pitched Gartner — by then one of the clients of his new firm — on taking its tech advisory services to India.

In 1995, a few years before Y2K would put India’s tech industry on the global map, my parents returned to Pune — a move timed so it would be before I started school. For my mother, that meant forfeiting a career and, potentially, a sense of individuality that America had allowed her to build.

“I got lots of recognition and appreciation for my work … completely unrelated to who I was, where I came from,” she said. “That was a wonderful thing that I knew I wouldn’t get in India … going back was a very, very daunting process.”

But they decided that once they took the plunge, there would be no turning back. “Most of those people ended up coming back to the US, [a] kind of path of least resistance,” my dad said. “We decided we’re not going to try, come hell or high water, we’ll make it work.”

How it’s impacted me

Two decades later, my parents still live in Pune, but my sister and I live in the US.

Whenever someone asks, “Where are you from?” we don’t have to think twice. We instinctively say, “India,” and immediately have a momentary identity crisis.

Everyone takes it at face value, though. And why wouldn’t they? We’ve got the skin, we’ve got the accent. With that answer, no one’s ever asked that dreaded follow-up question: “But where are you really from?”

We’ve spent most of our lives in India and it’s where our roots are, but being American is also a fundamental part of our identity. I’ve never thought about giving up my US passport, but I imagine doing so would feel a bit like being locked out of half the rooms in my home.

It’s also meant a lot of privilege guilt, especially growing up with friends now in the US going through the same process my parents once did — some of whom have already gone back, others who are planning to.

“I’m also mentally done with this whole uncertainty and insecure life where I don’t know about what’ll happen,” one of those friends told me last week.

As so many wrestle with the decision of whether to stay in a country that now seems to be making it as difficult as possible for them to do so, I asked my parents what America represents to them. Their answers, recorded separately, were strikingly similar — and strikingly different to what the country feels like for many right now.

“The openness and acceptance, just merit is what gets you ahead,” my dad said. “It was really about what you could achieve and what you proved you could do.”

While watching the US from afar the last few years has “diluted” that image for him somewhat, “I think the underlying spirit of the country still exists.”

My mom also used the word “acceptance,” soon after listing the other countries and cultures she was exposed to here — friends from Egypt, Liechtenstein, Morocco, Tunisia, all brought together by the American Dream.

“The realization that people are the same everywhere, that used to hit me very starkly every time,” she said. “It didn’t matter who you were, where you came from. What you did, your performance … that is what mattered. It represented something wonderful, and that is the America we lived in.”