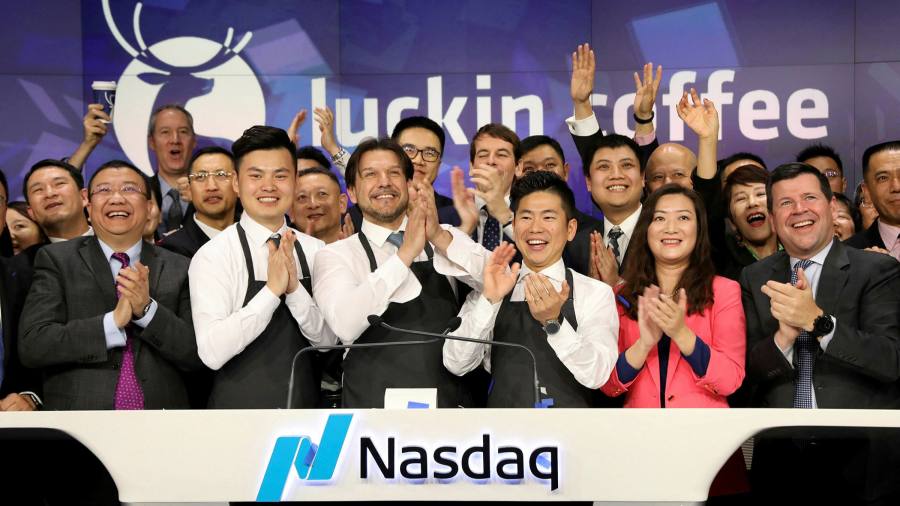 When the Nasdaq stock exchange filed this week to tighten its listing rules with the US Securities and Exchange Commission, there was barely a mention of China. But the real target of the restrictions was hard to miss.

Just a few days earlier the technology-focused exchange had issued a delisting notice to Luckin Coffee, the Chinese chain that said last month that certain employees conspired to “fabricate” hundreds of millions of dollars of sales. On Monday Nasdaq said its new rules were designed “to preserve and strengthen the quality of, and public confidence in, the Nasdaq market, and . . . enhance investor confidence”.

But the changes, which effectively forbid initial public offerings from countries such as China that raise less than $25m, were filed on the same day that GSX Techedu — another New York-listed Chinese company with a multibillion-dollar market capitalisation — was targeted in a new report from Muddy Waters. The short-seller alleged, among other things, that about 80 per cent of the company’s users were bots. The company has denied the allegations.

“These sort of things come to light when you have fraud cases like Luckin — that’s adding a bit of impetus behind the pressure you’re starting to see on Chinese [listings in] the US,” he said.

Western investment banks including Morgan Stanley, Credit Suisse and Citi have brought dozens of Chinese companies to market in recent years, profiting from lucrative listings that have come under growing scrutiny in the wake of the Luckin affair.

Unless you are in a business that hasn’t been in existence . . . then you’re competing as a marginal player

The trio stands out for its work on Chinese listings since the end of 2016: Morgan Stanley served as bookrunner on 28 deals, Credit Suisse on 26 and Citi on 22, according to Dealogic data. The deals raised a total of about $16.6bn; only one of Credit Suisse’s IPOs raised less than $25m.

Many of these companies have gone on to struggle in public markets; 26 of Morgan Stanley’s, 19 of Credit Suisse’s and 19 of Citi’s deals are trading below their IPO pricing. Companies brought to market by the banks since January 2017 are on average down 40 per cent.

Both Morgan Stanley and Credit Suisse worked on the Luckin IPO in May last year, which raised about $560m. All three banks declined to comment on their records as underwriters.

The deals have “obviously disappointed on an absolute basis”, said Nigel Stevenson, an analyst at Hong Kong’s GMT Research.

Mr Stevenson noted that even many of the best-known Chinese companies on Wall Street did not release earnings reports that were as frequent or transparent as those required of US-domiciled companies.

“It makes it difficult to spot specific [accounting] issues,” he said, particularly for start-up companies that went public without long track records.

Dealogic data show companies that went to market after 2016 enjoyed an average gain of more than 10 per cent on their first day of trading.

But after 12 months of trading, the average share price was down 20 per cent. Chinese listings since the end of 2016 are down 33 per cent below their IPO pricing, on average.

One banker who worked on some of the China deals during the period in question said many were from the education and fintech sectors, both of which were later hit by tougher regulations that “no one could foresee”.

Most new technology companies in China also face serious barriers to disrupting more established ecommerce companies such as Alibaba and Tencent, which are better able to take the heat when authorities clamp down.

“Unless you are in a business that hasn’t been in existence . . . then you’re competing as a marginal player,” said William Yuen, a Hong Kong-based investment director at Invesco.

The new rules planned by Nasdaq also include provisions that could force large-cap Chinese companies trading on the exchange to hire a special adviser on transparency and accountability, if the companies lack senior managers who have worked at US-listed groups.

But Arnaud Vagner, an analyst who writes under the name Iceberg Research, described such changes as “just cosmetics — it doesn’t change the problem”.

He noted that Nasdaq’s minimum fundraising requirement would hit only low-cost, low-diligence IPOs enabled by the so-called Jobs Act of 2012, leaving the bigger deals unscathed.

As a result, Mr Vagner was sceptical it would resolve fundamental questions over companies’ governance standards.

“The problem is that when something wrong happens nobody goes to prison and nobody goes in front of a judge,” he said.