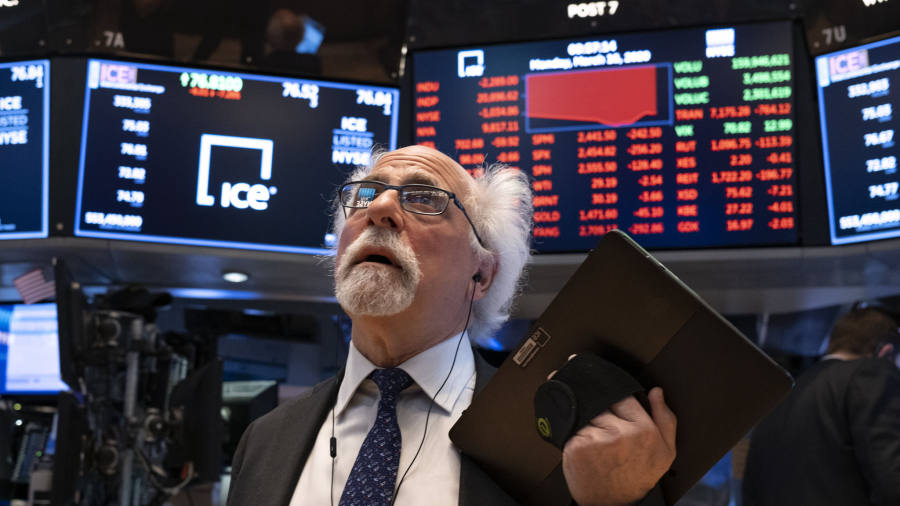 A fragile sense of calm returned to financial markets on Tuesday following the Federal Reserve’s dramatic intervention a day earlier, with a flurry of big companies taking the opportunity to sell bonds. But investors said they had little confidence that the radical actions of central banks — which analysts said amounted to a “nationalisation” of bond markets — would help stocks find a lasting foothold after weeks of turmoil.

On Monday, the Fed pledged to buy government debt in unlimited amounts, in its latest attempt to prevent the economic shock of coronavirus morphing into a market meltdown. The move followed similar steps from the European Central Bank and the Bank of England, which last week launched asset-buying programmes that dwarfed their response to the 2008 financial crisis in terms of the speed of purchases.

Investors have been reassured by a return of the typical relationship between stocks and bonds following these actions. On Tuesday, haven bonds weakened as stocks rebounded, marking a contrast to the panicked trading last week as outflows from funds drove investors to liquidate assets of all stripes in a bid to get their hands on cash — above all US dollars.

In the eurozone, last week’s announcement by the ECB of an extra €750bn of bond purchases has reined in government borrowing costs, particularly in Italy where they had threatened to spiral out of control.

However, investors said there was no reason to believe that the gains in global stock markets marked the start of a lasting turnround. Purchasing managers’ data showed the devastating economic impact of shutdowns, with activity slumping to an all-time low in the eurozone.

“Investors are once again choosing assets according to their quality, instead of selling the family silver to get cash, and that’s reassuring” said Rabobank strategist Richard McGuire.

“The dysfunctionality of markets has faded, but that doesn’t mean we can signal the all-clear. You can’t engender a recovery with monetary and fiscal policy — that has to happen through the medical sphere. The best you can hope for is to put the economy into a deep freeze.”

Following the unprecedented interventions by central banks, investors are also awaiting the details of government support for sectors where activity has dried up and for individuals who find themselves out of work. Negotiations over $2tn of US fiscal stimulus faltered on Monday.

But even huge increases in spending will not necessarily arrest the slide in stock markets unless accompanied by signs that the spread of coronavirus is slowing, according to investors.

“While central bank and fiscal action is absolutely crucial, the key requirement to stop the market rout is investors believing the virus is behind us,” said Seema Shah, chief strategist at Principal Global Investors. “Until that happens, central bank and fiscal action will quickly become outdated, requiring policymakers to repeatedly revisit and multiply their stimulus plans.”

For now, there is little indication in markets of concern about how governments will fund this huge economic stimulus. After a rise during last week’s chaos, yields in the US, Germany and other bond markets seen as safe have fallen back, and remain very low by historical standards.

This apparently relaxed attitude to huge deficits is down to the fact that investors think the Fed and other central banks are moving towards so-called yield curve control, according to Jim Bianco of Bianco Research. This is a technique pioneered by the Bank of Japan, intended to keep yields at a pre-determined level using open-ended asset purchases.

“The world has permanently changed,” he said. “The Fed is attempting to stop this repricing from going any further. They essentially announced they are nationalising the markets.”