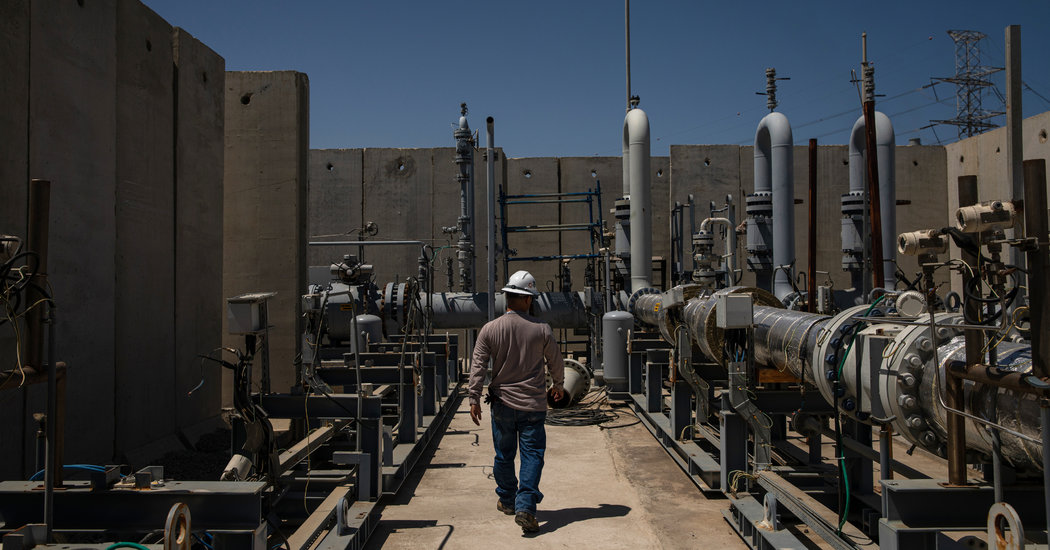 HOUSTON — A few months ago, Israel and some Arab countries were laying the groundwork for an energy partnership that held the potential for economic cooperation between once-hostile neighbors.

Israel started selling natural gas to Egypt, which in turn was reviving two gas export terminals, attracting badly needed foreign investment and opening a path for Israeli gas to Europe. Lebanon was preparing to drill its first offshore gas well after years of delays. And Palestinian representatives joined a regional forum with officials from Israel and other countries to lift energy exports to Europe.

But the coronavirus pandemic has abruptly interrupted those efforts, delaying exploration and exports. Gas prices, already low after a relatively warm winter in the Northern Hemisphere, have plummeted and storage facilities have filled to the brim. Struggling international oil and gas companies have slashed investment budgets, jettisoning projects.

The damage to the gas trade goes well beyond the Middle East, hurting businesses from Australia to the U.S. Gulf Coast. The pandemic is putting the brakes on a two-decade-long global expansion for natural gas, which has been replacing coal for electricity and heating and even competing with oil as a transportation fuel in some developing countries.

Now, tankers carrying gas in its compressed, cooled liquid form are sitting idle off the coasts of Europe as factories and businesses are only slowly coming back on line, if at all, and many people are forced to wait out the pandemic at home.

“The coronavirus trajectory is a big unknown in both economic and financial impact and policy changes to manage the fallout,” said Leslie Palti-Guzman, president of Gas Vista, a research and consulting firm. “But it poses unprecedented risk to L.N.G. demand and investments.”

Investment decisions for proposed multibillion-dollar liquefied natural gas export terminals — which can take up to a decade to plan, permit and build — have been delayed or canceled in Australia, Mozambique, Qatar, Mauritania, Senegal and the United States in recent weeks. Industry executives estimate that investments of more than $50 billion will be delayed this year and next. Coronavirus outbreaks have also interrupted supply chains and caused work force shortages, delaying construction of previously approved projects in Canada, the United States and Indonesia.

Even if the investment and construction delays are temporary they could produce a shortage of gas and drive up prices later in the decade. That could potentially help coal. But delays would most likely also be a boon to renewable energy like solar and wind, which are already growing quickly because their use does not exacerbate climate change and their costs have been falling.

American gas exporters, which could offer customers lower prices than suppliers in Qatar and Australia, have now lost that advantage since Asian and European gas prices have sunk. European countries have taken advantage of the flexible contracts American L.N.G. manufacturers offer and are canceling shipments.

Houston-based Cheniere, the top American L.N.G. producer and exporter, says its final decision on a major expansion of an export facility outside Corpus Christi, Texas, now hangs on whether it can strike enough contracts with foreign buyers.

Sempra Energy, based in San Diego, announced on May 4 that it would delay a final decision to build an export terminal in Port Arthur, Texas, until next year. That came after Texas LNG delayed a final decision on a proposed terminal in Brownsville, Texas, and Royal Dutch Shell withdrew from a Lake Charles, La., joint venture with Energy Transfer.

Tellurian, also based in Houston, recently laid off 40 percent of its 176 employees and cut other expenses in an effort to save a proposed project in Lake Charles. The company is struggling to finance construction despite having a federal permit to produce and export 27.6 million metric tons of L.N.G. annually.

Still, industry executives are hopeful that their business will bounce back.

“The coronavirus is going to delay decisions by a year but it is not going to change the fundamentals,” said Charif Souki, Tellurian’s chairman. He noted that China, which appears to have largely stopped the spread of the coronavirus, is starting to use more gas. “There is no incentive to use coal at the moment,” Mr. Souki said.

The falling price of gas has also encouraged countries like India, which is dependent on energy imports, to buy more. Partly as a result, global gas sales have dropped only slightly in recent weeks. The International Energy Agency projects a worldwide decline in gas consumption of 5 percent in 2020.

Still, some industry experts said that the pandemic could weaken the prospects for natural gas relative to renewable energy. With prices of solar and wind power declining, battery storage technology improving and concerns about climate change growing, renewables could be the biggest long-term threat to natural gas.

Jason Bordoff, the director of Columbia University’s Center on Global Energy Policy, said demand for gas could recover in a few years and continue to replace coal in developing countries trying to reduce air pollution in big cities. But he added that the pandemic, especially if it is lasting, could force political leaders and business executives to be more wary of relying on gas imports that come from distant shores.

“L.N.G., even before coronavirus, was a market that required large capital investments in the face of uncertainty about the future of markets, pricing and policy,” Mr. Bordoff said. “And those concerns are now even more uncertain coming out of Covid-19 then they were before.”

Since American L.N.G. exports began in 2016, the United States has become the third-biggest exporter after Australia and Qatar. The United States last year built more production capacity than any other country, a trend that is continuing in 2020.

Much of the American gas export boom has been based on the cheap gas bubbling up with oil from shale fields in Texas. But that advantage may fade now that oil producers are shutting wells and decommissioning rigs because of the economic downturn and slide in energy demand.

“The coronavirus and lower crude prices are going to create a multiyear decline in associated-gas growth which is the key to U.S. L.N.G. competitiveness,” said Mark Le Dain, vice president for strategy at Validere, a Canadian provider of software for oil and gas companies. “This change will structurally reduce U.S. market share in global L.N.G., especially in Europe, and Russia will grab more of it.”.

Russia already has a robust global pipeline network and is working to increase production and exports of L.N.G. with tax incentives. Qatar is also hoping to keep expanding exports, along with the political influence that energy sales gives it across the Middle East and North Africa, even as its revenues fall.

The most immediate and dramatic impacts are being felt in the eastern Mediterranean, where political leaders had pinned economic and geopolitical hopes on the gas boom.

Windfall natural gas discoveries off the coasts of Israel, Egypt and Cyprus, and the promise of more in Lebanese waters, made the region a hot exploration zone in recent years. Israel, in particular, hoped gas sales to Egyptian, Jordanian and Palestinian consumers would ease tensions. But the new gas has flooded a market where prices are crashing, delaying a bigger windfall on global markets.

Egypt in recent weeks shut one L.N.G. export terminal and canceled a deal to reopen a second one. Lacking lucrative markets, Egypt also halted all liquefied gas exports. That represented a setback for Israel, which had hoped to export its newfound gas riches through the Egyptian plants, and at least one company has postponed exploration along the Israeli coast. And after the first well drilled off the coast of Lebanon came up dry, an auction for future foreign investment was delayed because of a lack of industry interest.

“They were on the verge of a regional transformation and now they are stuck with a question mark and a cloud,” said Nikos Tsafos, a natural gas expert at the Center for Strategic and International Studies. “People are wondering: Is development delayed or will it even happen. That’s my sense regionally and also globally.”