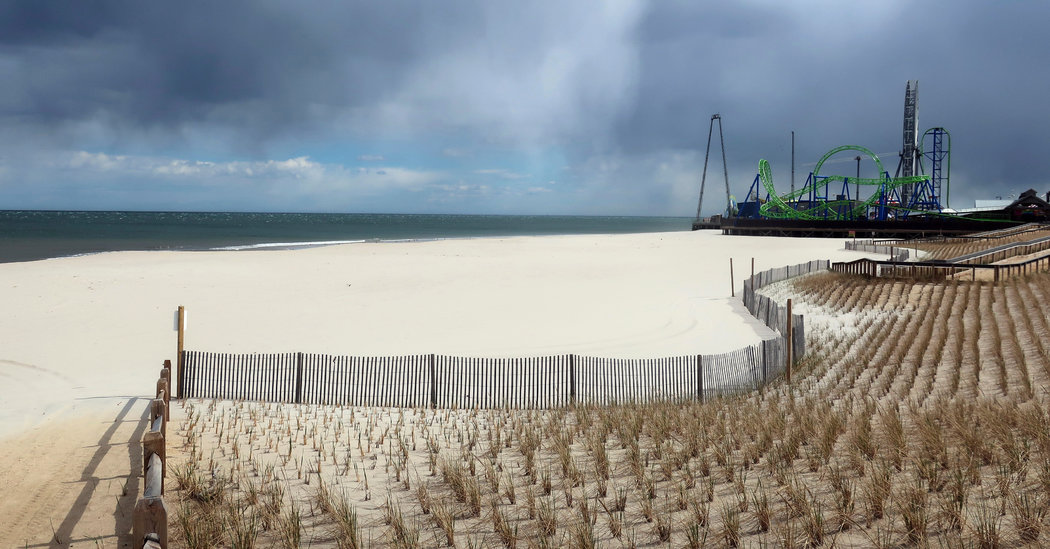 Gov. Philip D. Murphy sketched out benchmarks on Monday for relaxing his coronavirus lockdown order and reopening businesses in New Jersey even as he warned that the state faces a financial “Armageddon” — and could be unable to pay its teachers, firefighters and police officers.

He gave no indication of when the stay-at-home order might be lifted, saying it would remain fully in place until further notice.

Sounding a more hopeful note, Mr. Murphy did say that schools might reopen before the end of June. “There is a chance that we could get back in school,” he said in an interview Monday morning on CNBC.

Mr. Murphy, at a noon briefing, laid out four metrics that will be used to determine how quickly the state can begin to reopen: a sustained decline in hospitalization and infection rates; expanded testing capacity; more tracing of people who have had contact with those infected with the virus; and increased availability of places, such as hotels, for people who are sick with the virus to remain in isolation.

When pressed on the timing of a reopening, he was noncommittal, but said he expected it would be measured in weeks, not months.

“I want to see the shore humming throughout the summer,” he said.

Still, social distancing is likely to be the norm throughout the summer, including on beaches, he said.

He said a commission would be announced on Tuesday that will be responsible for guiding the decision-making about what reopens, and when. The reopening, he cautioned, would not necessarily mirror the slow wave of shutdowns that began in mid-March.

“Don’t expect a LIFO strategy — last in, first out,” he said.

Mr. Murphy gave few specifics about what sectors of the economy might be first to reopen, but he said his “bias” was toward making decisions that applied statewide, not region by region.

New Jersey has had the second highest number of cases of the coronavirus in the country, behind only New York. As of Monday, at least 6, 044 people had died with Covid-19, the disease caused by the virus, and more than 111,000 people had tested positive.

“That’s the sort of Armageddon that we’re looking at,” he said on CNBC.

By last week, a staggering 858,000 residents had filed for unemployment benefits, up from 84,000 for the same time period last year. Many others were still having trouble filing as the system was bogged down by antiquated technology and extraordinarily high usage.

If schools were to reopen, the governor said there would most likely be rules in place related to limiting large assemblies and requiring students and teachers to wear masks.

He said he expected steps toward reopening the economy would be done in concert with neighboring states, but not in lock-step.

Mr. Murphy’s announcement came a day after Gov. Andrew M. Cuomo offered a similarly broad blueprint for lifting New York’s lockdown after May 15, when his order shutting down the state is set to expire. Mr. Cuomo said “low-risk” businesses like construction and manufacturing might begin to reopen in parts of the state that were less affected by the virus.

Federal guidelines released by the White House 10 days ago advised states that they could move into limited reopening after meeting certain criteria, including two weeks of sustained downward trends in documented cases of Covid-19 and reduced strain on hospitals.

In New Jersey, where only residents with fevers and persistent coughs have been able to get tested, that threshold remains a hurdle. The rate of those who tested positive for the virus has been hovering at about 43 percent, well above the 10 percent recommended by the the World Health Organization before easing quarantine restrictions.

Mr. Murphy has said that he expected the state’s testing ability to expand greatly in the coming weeks as Rutgers University rolls out its newly approved saliva test more broadly. The test does not require a nasal swab, making it easier and less dangerous for health care workers to administer.

On Monday, he said he expected the state to be able to double its testing capacity by the end of next month.

In Georgia, close-contact retail businesses like barbers and tattoo parlors were allowed to open on Friday. Areas where large numbers of people congregate, such as movie theaters, were expected to accept customers on Monday, though mayors of large cities like Atlanta and Augusta have resisted Gov. Brian Kemp’s call for reopening.