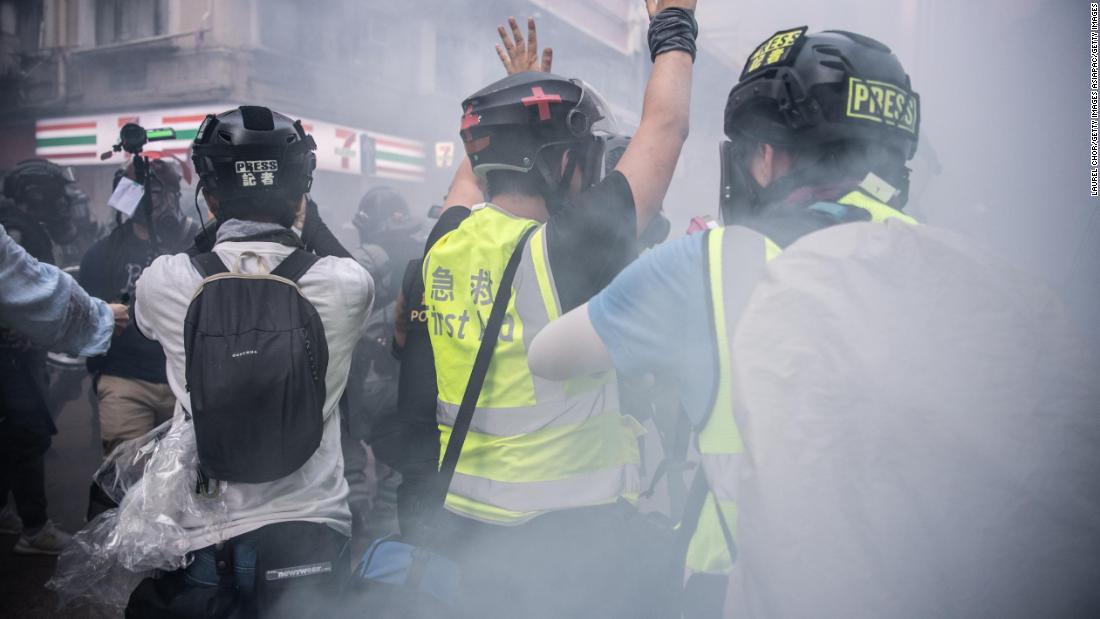 In announcing that it would move its Asia digital news operation — roughly one third of its staff in Hong Kong — to Seoul, the Times said the security law meant it was “prudent to make contingency plans and begin to diversify our editing staff around the region.”

The new legislation, which came into force on July 1, criminalizes secession, subversion, terrorism, and collusion with foreign forces. Officials previously said it will affect a tiny handful of Hong Kongers, while critics pointed to its broad scope and ill-defined offenses as reason for alarm.

While an internal email announcement regarding the Times move was sent out overnight, some staff at the paper in Hong Kong learned about the situation on Wednesday morning as news of the decision was widely shared on Twitter, before managers were able to address them, a source with knowledge of the announcement said.

With strong protections for free speech, close proximity to mainland China, and generous visa policies, Hong Kong has long been a major media hub in Asia. Multiple outlets base their regional operations in the city, including CNN, Bloomberg, Agence France-Presse (AFP), the Financial Times and the Wall Street Journal.

The new security law has led to anxiety within the Hong Kong media community, owing to its sweeping new offenses and undefined proposals for greater “supervision and regulation” of journalists in the city.

Article 4 of the law says “the freedoms of speech, of the press, of publication, of association, of assembly, of procession and of demonstration” will be protected. But it also criminalizes the leaking of “state secrets,” a vague term commonly used in China to cover a range of issues deemed to be in the national interest and which has been used in the past to imprison journalists on the mainland. That could deter both journalists and sources from reporting or collaborating on stories relating to government affairs.

Officials have denied that the law is vague and pointed to the protections outlined in it. In response to a question from the city’s Foreign Correspondent’s Club earlier this month about whether the government could guarantee press freedom, Hong Kong leader Carrie Lam said that if “reporters in Hong Kong can give me a 100% guarantee that they will not commit any offenses under this piece of national legislation, then I can do the same.”

Asked about press freedoms by CNN in a press conference on the law shortly after it was enacted, Lam said that people would be free to criticize it, including reporters. But, she warned, “If there is more, if you are involved in organizing or colluding that’s another matter. It’s a question of evidence and the law.”

Of particular concern for many reporters is how a new enforcement committee outlined in the law for managing the media will operate, and whether greater “supervision” will mean the creation of China-style journalism visas. Such visas come with strict oversight and can be hard to acquire. The government has also in the past refused to renew work permits for some journalists based in mainland China, effectively forcing them out of the country.

Multiple media organizations in the city, including the Times, are experiencing delays in getting new visas, sources with knowledge of the situation said. It is unclear whether this is as a result of the new law, or due to other circumstances such as the continuing coronavirus pandemic.

No other major foreign news organizations have yet to go as far as the Times in preparing to move some operations out of the city, but conversations are ongoing among staff and managers at many outlets.

Multiple employees at the Wall Street Journal said managers had been in preliminary consultations with staff about potential preferences for cities outside of Hong Kong, should they have to move into the future, but there were no immediate plans to do so. AFP, a French government-funded press agency with major operations in Hong Kong, is also having conversations about its future, a source said, though it is committed to staying in the city.

Asked about CNN’s position, a spokesperson said there are “no plans to relocate from Hong Kong at this time.”

“If our ability to operate there becomes compromised we will of course review that,” they added.

Many organizations will be loathe to leave Hong Kong, with its strong transport connections both to China and the rest of Asia and low taxes. While Singapore is used as a base of operations by some outlets, including the BBC, it has its own less-than-perfect record on press freedom. Other regional capitals, such Tokyo, are far more expensive to operate in, and can be difficult to attain visas for staff.

The NYT said that it “considered Bangkok, Seoul, Singapore and Tokyo” and that ultimately “South Korea proved attractive, among other reasons, for its friendliness to foreign business, independent press, and its central role in several major Asian news stories.”

While the new security law may result in international media leaving the city or shrinking their operations in Hong Kong, the situation is far more dire for the local press.

In its annual report on press freedom in the city, published last week, the Hong Kong Journalists Association warned that “the already-limited room for free speech, freedom of publication and freedom of the press will be severely shrunk” under the law.

“In the past, a lot of journalists have been jailed for breaching national security law in mainland China because of their reporting or articles,” HKJA chairperson Chris Yeung said.

The report found that even before the law was enacted, Hong Kong press freedom had “dropped to a record low,” in the wake of sustained and often violent anti-government protests last year and multiple incidents involving reporters and the police.

“The decline is the sharpest since the survey was launched in 2013,” the association said. “Both the public and reporters expressed concern over the threatened personal safety of reporters when covering news.”

Concerns about the security law go beyond reporting on protests or proponents Hong Kong independence. In particular, new offenses relating to “state secrets” raised alarm because of the broad way they have been applied in China in the past to stifle reporting on corruption and government misbehavior.

“The problem is that what constitutes ‘state secret’ or intelligence is not defined, but are to be ultimately decided by (Hong Kong’s) Chief Executive,” said an investigative reporter with a prominent Hong Kong outlet. “The damage to the press is greater when the so called ‘red line’ or the operating space are not explicit, so news editors and reporters will self censor, for fear of treading onto what would become illegal, when the government decides so.”

The reporter, who requested anonymity to talk freely about the law, added that “the essence of investigative reporting is to reveal wrongdoing committed by the government, its officials or others in positions of power. More often than not, the stories we produce are unfavorable to the government’s position, they often would disrupt the status quo, and lead to intense public attention, scrutiny, or ‘hatred,’ the last of which is an offense under the law.”

— Hadas Gold contributed to this report.