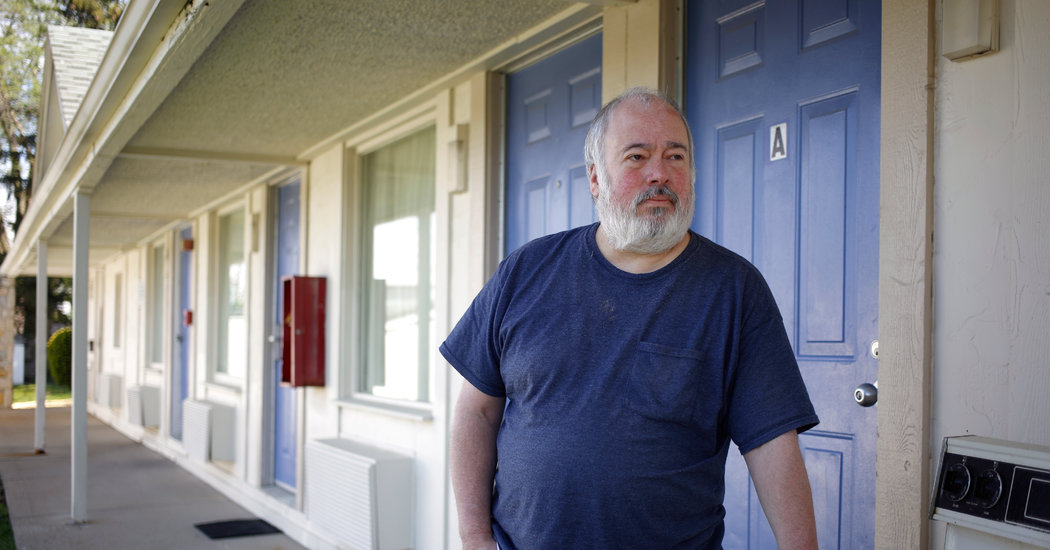 Rich Jackson, a 54-year-old journalist who worked as the top editor of The Herald-Times, a Gannett-owned newspaper in Bloomington, Ind., received the bad news in the parking lot next to the paper’s headquarters. He was also told he would have to vacate the apartment in the same building, where he had been living for 10 months.

Unable to go the newsroom, Mr. Jackson started a blog. He called it The Homeless Editor.

“In terms of writing, I always look for key words, and you couldn’t have better than those two,” he said in a phone interview.

His first four posts have gotten 20,000 page views — high figures for a solitary blog. They describe how, as he put it in one entry, “I went from someone to no one in 30 minutes.”

The apartment where he had been living was once reserved for the owner of The Herald-Times. If you stand facing the newspaper building from Walnut Street, you’ll see the entrance to apartment is on the right and the entrance to the newsroom is on the left.

“It was a great place to live,” Mr. Jackson said. “I live pretty simply, too.”

When he was laid off Wednesday, he was told he had to get out by noon Friday.

A spokeswoman for Gannett, which owns the newspaper, confirmed he was laid off and said one editor​ would now oversee all the chain’s newspapers in southern Indiana. The decision, she said, had to do with a merger last year between Gannett and the parent company of GateHouse Media, not the economic fallout from the coronavirus.

A newsroom lifer, Mr. Jackson grew up in Chippewa Falls, Wis. He started his career at various Badger State papers after graduating from the University of Wisconsin, Eau Claire.

“Ernest Hemingway said the best training he had was at The Kansas City Star, because he had to write 5,000 words, no matter how hung over he was,” he said. “Turns out my novels stink, but I’m a pretty good journalist.”

Last year he was working at The Times-News in Burlington, N.C., a newspaper then owned by GateHouse. When GateHouse bought The Herald-Times, Mr. Jackson was soon urged to move to Bloomington.

The company gave him what he referred to on his blog as “the fancy title of Senior Executive Editor.” It also threw in the apartment for a time, rent-free.

“I could save up some money and look for a place,” Mr. Jackson wrote on the blog. “Except — there’s always an ‘except.’ I worked nearly every waking hour for most of my 10 months here.”

He said he had offers to stay with friends around the country. He has some savings, but his bank account is not what it might have been. “I’ve struggled with finances because of divorce and bankruptcy, termination and a previous layoff,” he wrote.

Mr. Jackson, who has covered homelessness, said on his blog that most homeless people are not those “who sit on the streets of all our major cities.” Rather, he wrote, “the homeless crowd are much more like me — a person who doesn’t have a single address to call home.”

He finds himself in a Motel 6 at a time when the coronavirus pandemic has sped the decline of the local news industry. The number of newsroom jobs in the United States has fallen by roughly half since 2008, the Pew Research Center said last month. Readers have increasingly been getting their news on screens, rather than from newsprint, and the revenue generated by online ads has fallen far short of the money once supplied by print advertising. Large companies, many of them controlled by Wall Street companies, have scooped up papers across the country and cut their staffs in an effort to wring profits from an ailing business.

The Gannett-GateHouse merger is typical of the consolidation in the industry. It created the largest newspaper chain in America. With more than 250 publications, Gannett publishes roughly one in five of the country’s dailies, including USA Today and The Detroit Free Press.

The pandemic made conditions even worse. Small businesses have closed, cutting into a main source of revenue. Since March, more than 30,000 media company employees in the United States have been subjected to layoffs, pay cuts or furloughs. Gannett said that most of its 24,000 employees would take one-week furloughs in April, May and June.

The Herald-Times has a print circulation of about 15,000, with about a dozen reporters and editors. Mr. Jackson said he was proud of its coverage last year of the community conflict over vendors at a local farmers’ market who were accused of being white supremacists. The story received national attention.

Mr. Jackson said he had signed a non-disparagement agreement as part of his departure. He is now looking for work — and hopes to stay in journalism.

“There’s something about being in a newsroom where I feel like I’m wrapped in a warm quilt,” he said. “It’s where my home is.”