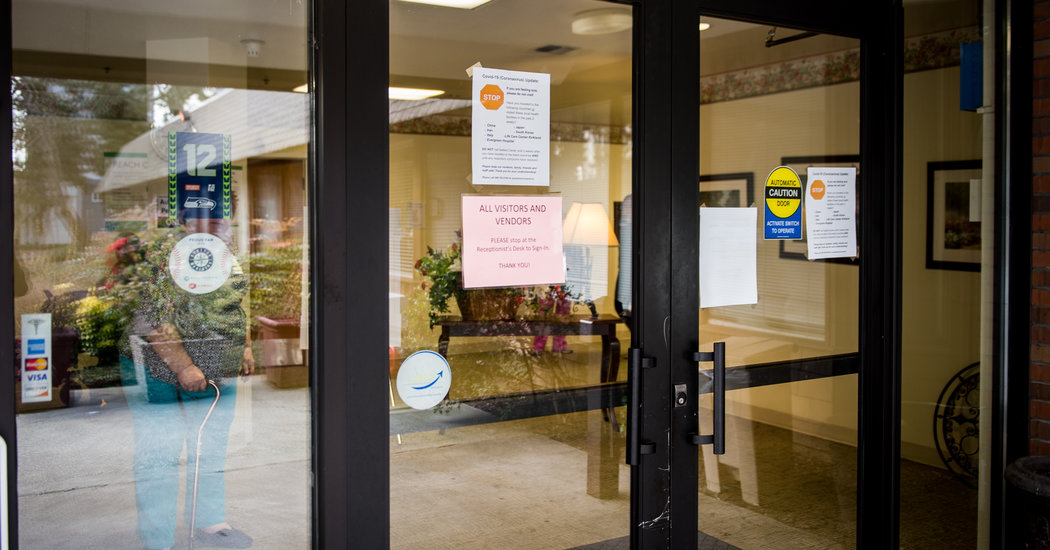 The nation’s biggest nursing home operator, Genesis HealthCare, has received more than $300 million in government grants and loans to help it grapple with the coronavirus pandemic that has killed about 1,500 of its residents.

Genesis said on Wednesday that it had received a $180 million grant under the CARES Act, plus $27 million in state funding and $158 million in advance Medicare payments — effectively a short-term loan from the federal government.

But its main life preserver was the relief bill, which set aside up to $100 billion for cash-starved hospitals, nursing homes and other medical providers dealing with the pandemic.

Genesis operates nursing homes in 26 states and is one of the few publicly traded companies in the industry. Its size makes it something of a bellwether, and its financial filings provide a detailed look at the added stress being put on all nursing homes. Revenues have been hurt by reduced occupancy, and costs have soared from adding staff, buying personal protective equipment and purchasing virus testing kits to protect residents and workers.

In April, the company’s operating expenses rose an additional $21 million solely owing to the pandemic. And the company said during a conference call to discuss its first-quarter earnings that it expected a similar additional increase over what it would normally spend in May.

Occupancy levels have plummeted since the virus began to spread this spring: At the end of March, the company said, roughly 88 percent of its 42,000 beds were full. It expects that figure to fall to 76 percent by the end of this month.

The difficulties at Genesis offer a glimpse of how the Covid-19 crisis has ravaged long-term care facilities. The nation’s 15,400 nursing homes have become ground zero for the crisis, with well over a third of the nearly 100,000 deaths in the United States involving either residents or employees of elder care facilities.

Thanks in part to the sales of some properties, Genesis reported a $33.5 million profit in the first quarter, a year after reporting a loss in the same period. But the coronavirus crisis did not really hit the United States until late March, and the bulk of the money handed out under the CARES Act did not go out until after April 1.

“The second quarter of 2020 might be a much better indicator of the true financial health of Genesis under Covid,” said David Grabowski, a professor of health care policy at Harvard Medical School, who has written frequently on the nursing home industry. “As we move into June, the nursing home sector has not rebounded in a major way. A key question is how long federal support can and will continue. It is very unclear when the nursing home sector will return to business as usual.”

When Genesis held its fourth-quarter earnings call on March 17, the company had reported a single case of Covid-19 among its residents. The number has since mushroomed: Genesis said on Wednesday that it had 6,700 confirmed cases spread across about half of its 316 long-term care facilities.

George Hager Jr., chief executive of Genesis, said in a conference call that some facilities that had been dealing with cases of infection are now free of the virus. Richard Feifer, the company’s chief medical officer, added that the number of new cases is “de-accelerating” within Genesis’ facilities.

“We have seen a clear flattening of the curve in the past two weeks,” Mr. Feifer said.

Even with the federal government’s financial relief to the nursing home industry, there has been concern about how some operators will weather the pandemic, because many face tight margins and have costly lease agreements.

Also, over the past two decades, private equity firms and other investors have come into the nursing home industry, viewing it as both a real estate play and an opportunity to cross-sell medical services to operators that rent their facilities.

Genesis, based in Kennett Square, Pa., faces significant financial headwinds. The company leases 76 percent of its buildings from corporate landlords and some of those agreements have annual rent escalation clauses. Its two biggest landlords are Welltower and Omega Healthcare Investors, both publicly traded real estate investment trusts.

“I don’t think there is an interest for anyone being that large as a lessee-operator,” said Chad Buchanan, co-founder of Twin Light Capital, a small private equity firm that invests in nursing homes and senior housing complexes.

Genesis’ long-term lease obligations total $2.6 billion. The company also has about $1.5 billion in debt — some owed to its landlords and lending affiliates of the private equity giant Apollo Global Management. Some loans are costly; one carries “an annual interest rate of 12 percent,” according to the most recent financial filings.

In the first quarter, Genesis was able to swing to a profit in part because of an aggressive effort to pay down some of its debt. The company has sold some of the buildings it owns outright, and sold its operations at other facilities, allowing it to get out of costly leases.

Genesis has continued selling facilities even in the midst of the crisis, the company’s filings show. In April, it sold two nursing homes in New Jersey and one in Maryland for a total of $45.8 million.

The company had to fend off a court battle to complete the sale of one of those New Jersey facilities — the Willow Creek Rehabilitation and Care Center in Somerset County. The union representing workers at the facility, where at least 15 people have died of Covid-19, went to court to make sure the buyer would honor most of the terms of a previously negotiated health insurance package. The sale went through after the judge issued an order that was satisfactory to the union.

The company has been in danger of having its shares delisted from the New York Stock Exchange. But it recently got a reprieve when the exchange notified Genesis that because of the pandemic it had until the end of the year to get its share price trading consistently above $1.

Shares of Genesis were trading just above $1 on Wednesday afternoon, down about 10 percent.