NY Needed Ventilators for Coronavirus. They Developed One in a Month. 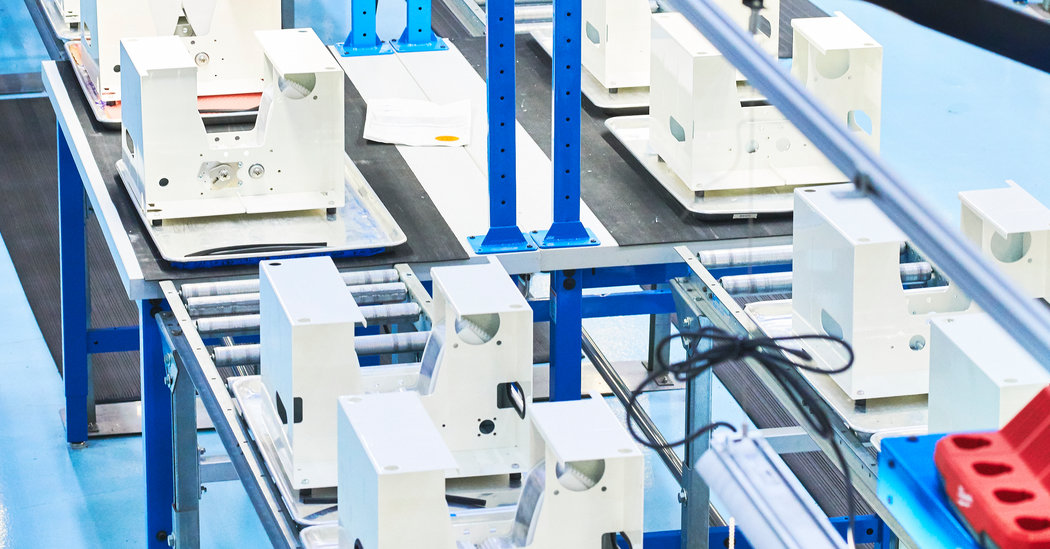 The nudge came in an email in early March from an Italian friend alarmed by how fast the deadly coronavirus was spreading in his country.

A shortage of ventilators, he told Scott Cohen and Marcel Botha, was a critical problem in Italy, and he warned that it soon would be in the United States, too. He urged the pair to apply their skills to the ventilator challenge.

Both Mr. Cohen, co-founder of a technology center for researchers and start-ups, and Mr. Botha, chief executive of a product design and development company, were skeptical. A standard ventilator, with thousands of parts requiring a complex global supply chain, was hardly a device that could be manufactured quickly and affordably.

“I was dismissive at first,” said Mr. Botha, whose company is called 10XBeta. “It looked impossible.”

But they soon found a design for a basic ventilator that could serve as their core technology. Since then, they have orchestrated from New York a far-flung collaboration of scientists, engineers, entrepreneurs, physicians and regulatory experts and accomplished in a month what would normally take a year or more.

The result are machines known as “bridge” ventilators, or automatic resuscitators, priced at $3,300. They are mainly meant to help less critically ill patients breathe. If patients become sicker, with lung function more compromised by the disease, they still need to be placed on standard ventilators, which typically cost more than $30,000.

On Friday, the Food and Drug Administration approved the new device, the Spiro Wave, to be used on patients in hospitals, under an expedited process called emergency use authorization.

The project was initially targeted at New York City as a stopgap solution for what only a month ago appeared to be a looming, life-threatening shortage of ventilators in the city.

But the urgency has receded for now. While the city’s coronavirus death toll continues to mount, hospital admissions are trending down, and intensive-care units seem to have enough ventilators.

But health experts say a machine like the Spiro Wave should be a valuable tool in the arsenal of treatment. It can, they say, expand access to breathing assistance in other parts of the country as the pandemic spreads, and especially to rural communities without major medical centers. And capable, low-cost machines could greatly expand access to treatment in developing countries in Asia, Africa and Latin America.

The New York group has fielded inquiries from across the United States and from companies and governments worldwide. It plans to license its design for free.

The project is one of several pushes in America and abroad to streamline ventilator design and lower costs. This month, Medtronic got F.D.A. approval to offer in the United States a ventilator that it sells in 35 other countries for an average price of less than $10,000. The company is also making the machine’s blueprint freely available to other manufacturers.

The hurry-up engineering feat relied on human networks; two in particular stand out. The original design came from a classroom project at the Massachusetts Institute of Technology a decade ago. Since the coronavirus outbreak, M.I.T. professors and students have worked to upgrade the design in collaboration with outside groups. And several key contributors to the project are M.I.T. alumni.

The other network is the government and business community of New York, where Mr. Cohen and Mr. Botha are based. The city government took on the role of a risk-taking venture investor, first with a $100,000 research grant and then a nearly $10 million agreement to buy 3,000 of the basic ventilators.

“It’s essentially a start-up that has made unbelievable progress in a short time,” said James Patchett, chief executive of New York City’s Economic Development Corporation, which backed the project.

The New York ventilator effort got underway after widespread warnings of shortages. In mid-March, Mayor Bill de Blasio held a conference call with top staff members. Mr. de Blasio recalled that the looming ventilator shortage was “scary as hell.” New York had no ventilator producers, but he told his staff to do and spend what it took to solve the problem.

The city’s economic development chief, Mr. Patchett, who was on the call, knew Mr. Cohen and his technology center, New Lab, which is in the Brooklyn Navy Yard. Mr. Cohen told him about the ventilator-design project that he was putting together. It sounded promising, and the city made its initial grant.

“We should definitely do this,” Dr. Katz recalled telling Mr. Patchett.

The project had launched about 10 days earlier, after Mr. Cohen, on the recommendation of a scientist friend in San Francisco, got in touch with Alex Slocum, a renowned mechanical engineer at M.I.T. whose class created the design in 2010.

A group of faculty and students — Mr. Slocum led hardware design, and Daniela Rus, a professor and robotics expert, led software development — worked to upgrade the design to help coronavirus patients. The device would have to be able to push air into badly impaired lungs at several times the force used to resuscitate a normal lung.

“This was going to take a serious machine,” Mr. Slocum recalled.

The New York group began closely collaborating with the M.I.T. team. Dr. Albert Kwon, an M.I.T. graduate and a medical adviser on the project who is an anesthesiologist at the Westchester Medical Center, and Mr. Botha, also an M.I.T. alumnus, and others from New York made several trips to Boston for joint work and testing.

The M.I.T. academics’ goal has been mainly to develop designs and share information on a website. But the mission for the New York group was to make the low-cost ventilators quickly. The hub of that effort is a former perfume factory in Long Island City, Queens, that is now home to a high-tech manufacturer, Boyce Technologies.

The temperature of everyone who enters the brick building is taken, a precaution against infection. The 100,000-square-foot facility combines engineering and production with robots, a clean room, and circuitry and software design departments.

Manufacturing, engineering and medical experts have worked side by side for three weeks. Dozens of versions of the machine have been carted off to the dumpster, as upgrades and improvements were made. In recent days, M.I.T. engineers traveled to Queens to help with last-minute software tweaks.

“There’s a lot you can’t see in a model,” said Charles Boyce, the founder and chief executive of Boyce Technologies. “And if you can’t manufacture something at scale, it doesn’t matter. It’s not going to have an impact.”

Producing thousands of machines means lining up sometimes scarce supplies. One of those parts was an air-pressure sensor to ensure that a patient’s lungs were not overinflated, which could cause damage. Mr. Cohen knew that Honeywell was a leading producer of the sensor, and he tapped his network of personal contacts to secure it in volume.

Late one night, Mr. Cohen called Kathryn Wylde, chief executive of the Partnership for New York City, a business group of the city’s top executives. Kevin Burke, a former chief executive of New York-based Con Edison, is a Honeywell board member. Introductions were made, and after a series of calls to Honeywell executives in America and Asia, a supply of the sensors was secured.

The New York ventilator project was intended to address a seemingly urgent need before large-scale initiatives — such as a Ford-General Electric partnership — began to produce ventilators.

While New York’s crisis has eased, Dr. Katz cautioned that pandemic viruses are unpredictable and mutate. A later variant, or second wave, in the fall could be less lethal or more, as was the case with the second wave of the 1918 flu pandemic.

“This is still a useful option to have, even if there is not the urgency there was,” he said.

The low-cost ventilator, Mayor de Blasio said, is an “invaluable tool” and part of the stockpile of medical equipment and supplies the city needs as “insurance against a Phase 2” of the pandemic.

“We have to get through this first,” he said. “But for the future, we have to have an ongoing self-sufficiency effort in New York. What we’ve gone through should be a never-again moment.”