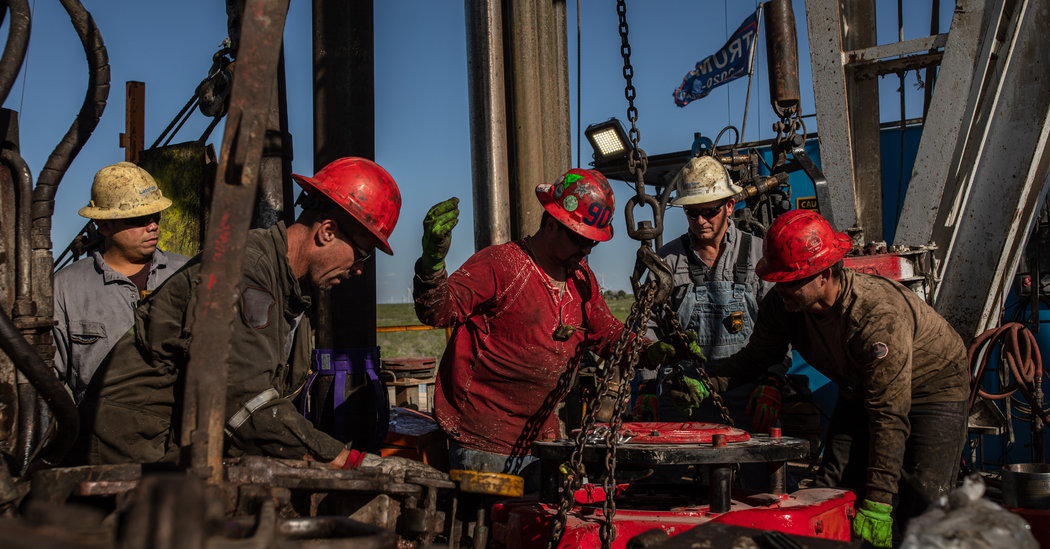 HOUSTON — Driving in the United States and Europe is picking up a little. Refineries in China are buying more oil as that country’s economy reopens. Saudi Arabia and Russia ended their price war and slashed production, and American oil companies are decommissioning rigs and shutting wells.

All those developments have helped push up oil prices modestly in recent weeks. On Friday, U.S. oil futures climbed more than 7 percent to nearly $30 a barrel, which is just enough for some of the best oil wells in the United States to break even.

“May, it seems, is a month when traders can finally sit back more comfortably for a moment and take a breath,” said Bjornar Tonhaugen, head of oil market research at Rystad Energy, a research and consulting firm. “But we warn that the second half of the year will not be met with precrisis oil prices again, as the gigantic oil stock overhang must first be worked down.”

Even after the recent rally, oil prices are roughly half of what they were at the beginning of the year. And the average price for regular gasoline in the United States is still a relative bargain at $1.87 a gallon, 99 cents less than a year ago, according to AAA.

Energy experts warn that oil prices may dip again if there is another surge in coronavirus cases and deaths as governments begin allowing businesses to reopen and encourage people to move about more freely.

Prices could also fall when tankers filled with more than 50 million barrels of crude oil from Saudi Arabia reach the United States in the next two months. That supply could overwhelm storage facilities, pipelines and refineries, leaving little room for domestic production.

The International Energy Agency expects gasoline demand in the United States this month to be down 25 percent from last May. While that is hardly good news for the oil industry, it is a big improvement from the 40 percent decline in April.

Demand has also rebounded in many European countries that are slowly allowing businesses to reopen.

Parts of the oil and gas industry, including petrochemical manufacturing, have done relatively well during the pandemic. That’s largely because of strong demand for masks and other protective equipment that include materials made by the energy industry.

On the supply side, Saudi Arabia, the Organization of the Petroleum Exporting Countries and their allies are reducing production rapidly. The Energy Department estimates that OPEC production will fall below 24.1 million barrels a day by June, a 6.3 million-barrel decline from April. Russia, which has coordinated with Saudi Arabia in recent years, is expected to cut its production by 800,000 barrels a day from last year. Canada, Norway and several other major producers are cutting as well.

But the most drastic cuts are coming in the United States, where the frenzy of drilling in Texas and North Dakota shale fields led to a doubling of American production in recent years.

U.S. oil production has already plummeted by 900,000 barrels a day since February, a 7 percent decline. Analysts said they expected the industry to cut an additional two million barrels a day by the end of the year as companies shut more wells and production from other wells declines naturally.

“The companies are making big, bold cuts that are helping potentially to give some buoyancy to the oil price right now,” said Regina Mayor, global and U.S. head of energy and natural resources at KPMG. But it’s not clear that this rebound will be sustained, she said, because “we just have too much of a supply glut that we are going to have to work off.”

Ms. Mayor expects a prolonged price slump that will force the American oil industry into a major restructuring. Financially weaker companies will have to merge with or sell oil fields to better capitalized businesses. On Friday, for example, Ultra Petroleum, which produces oil and natural gas in Wyoming, filed for bankruptcy protection for the second time in four years.

“We will see some consolidation, which the industry needs and is warranted,” Ms. Mayor said. “You could see a national oil company coming in and taking a stake, provided they are on reasonable terms with the Trump administration.”

William T. Drennen, chief executive of WTD Resources, an oil and gas driller in Texas and Louisiana, said it could take a long time for the industry to recover the ground lost during the pandemic.

He said it would be expensive to restart wells and difficult to safely and efficiently put together field crews once people who were laid off had found new jobs or had been unemployed for a long stretch.

“It’s going to be very difficult to get things going again,” Mr. Drennen said. “I think by the summer months you will see more companies in real peril.”