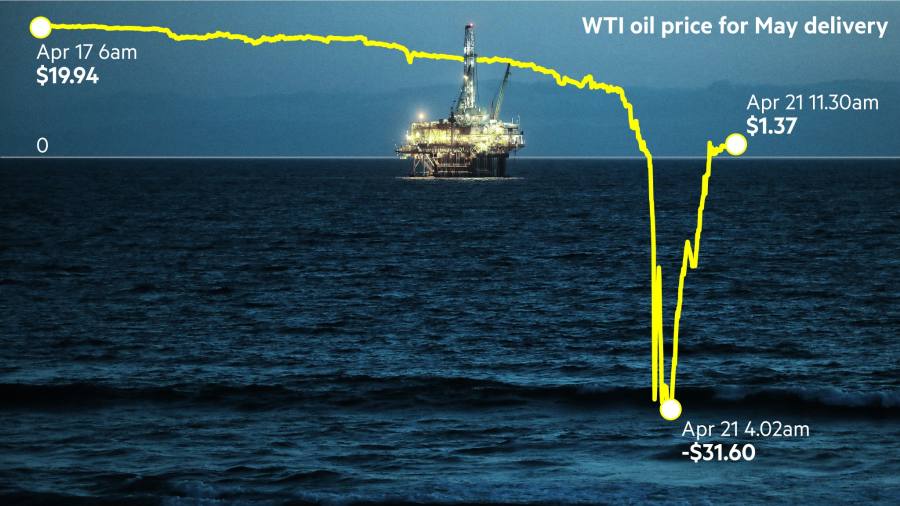 Global oil markets remained under intense pressure on Tuesday, with Brent crude dropping below $20 per barrel for the first time in 18 years while other major benchmarks across the world tumbled.

The international oil marker slipped as low as $18.10 before recovering slightly to trade around $19.90 by mid-morning in New York.

The fall suggests traders see no immediate let-up in the collapse in crude demand that sent some US oil benchmarks plunging below $0 for the first time on Monday, leaving producers paying for buyers to take their oil away. The severe drop in demand coincides with levels of US production remaining robust despite oil storage tanks being just weeks away from reaching capacity.

“The car is speeding up and market forces will inflict further pain until either we hit rock bottom, or Covid clears, whichever comes first,” said Michael Tran, commodity strategist at RBC Capital Markets.

Coronavirus has sent the oil sector into a state of crisis, with lockdowns and travel bans implemented by authorities slashing global demand for crude by as much as a third this month from pre-crisis levels.

Contracts for the US benchmark West Texas Intermediate for delivery next month tumbled as low as minus $40 a barrel on Monday, marking the first time it had fallen in to negative territory, where it largely remained on Tuesday. The slide was exacerbated by traders seeking to offload any obligations to take on physical product ahead of the contract’s expiry today as storage reached capacity at its delivery point in Cushing, Oklahoma.

The June contract, which held above $20 a barrel on Monday, has also come under heavy selling pressure, dropping 30 per cent to $14.40 in morning trade in New York, suggesting the blowout in the May contract was more than just a technical blip.

“The contagion has spilled over to WTI June 2020 deliveries, which could also be well on their way into the red as we move towards physical delivery dates,” said Louise Dickson at Rystad Energy.

Analysts said both Brent and the June WTI contract were likely to face further downward pressure in the coming weeks, given the supply glut shows little signs of abating.

Plans for unprecedented supply cuts by some of the world’s biggest producers such as Saudi Arabia and Russia have so far failed to offset the tumble in oil demand.

Fatih Birol, head of the International Energy Agency, said on Tuesday that the reductions, set to begin to take effect next month, were “insufficient to rebalance the market immediately due to the scale of the drop in demand”. He called for countries that have committed to supply cuts to enact them as soon as possible and suggested they consider deepening them.

Meanwhile, officials and Opec delegates sought to talk up the market. Saudi Arabia said on Tuesday it is prepared to take additional measures, alongside other producers that are part of the Opec+ alliance, to prop up the oil market and achieve market stability. Riyadh’s state news agency SPA cited a cabinet statement saying: “[The] Kingdom is committed with Russia to implement production cuts over next couple of years.”

Opec delegates were due to hold a conference call on Tuesday to discuss the WTI price plunge and potential next steps, said one person familiar with the matter. “The thing is, there is nothing anybody can do. Producers need to find a way to ride it out.”

For its part, Russia downplayed the collapse in crude prices, saying there was no need to view it as an “apocalyptic” event after its Ural blend, which is loosely based on Brent, fell to its lowest level since 2002 on Tuesday.

“The chaos with futures is absolutely speculative, just a trading issue,” Kremlin spokesman Dmitry Peskov said. “Of course there is no need to give this an apocalyptic hue.”

The oil collapse has also underscored the powerlessness of Donald Trump, who had pressured Saudi Arabia and Russia to agree to supply curbs in a bid to support the domestic shale industry.

On Tuesday the US president said on Twitter he had told the energy and Treasury secretaries to “formulate a plan” to make funds available to energy producers “so that these very important companies and jobs will be secured long into the future”.

US and European equities slid, partly dragged down by weakness in energy stocks. The S&P 500 dropped 2.8 per cent, while in Europe the continent-wide Stoxx 600 was 3 per cent lower.

In fixed income, the yield on the 10-year US Treasury fell 0.08 percentage points to 0.541 per cent as investors retreated to the safety of core government debt.