One America News, the Network That Spreads Conspiracies to the West Wing 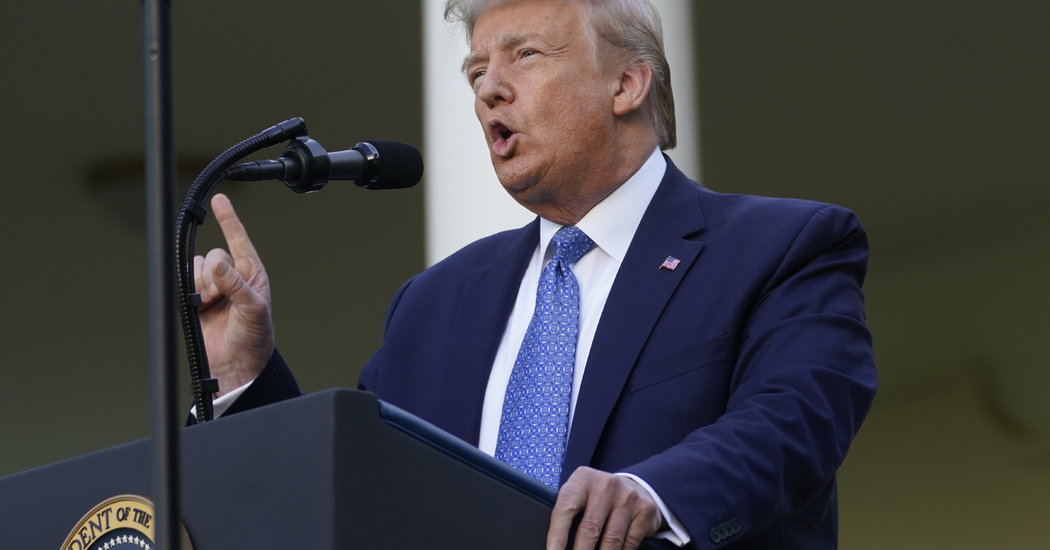 The conservative cable network One America News has a minuscule audience, attracts few readers on the web and has struggled to break into the television mainstream.

But thanks to one powerful viewer in the White House, the network’s influence — and its conspiracy theories — are echoing in the highest reaches of American politics.

President Trump, responding to a One America News segment, floated a baseless theory on Tuesday that a 75-year-old man in Buffalo who was knocked to the ground by the police — and hospitalized after bleeding from his head — was “an ANTIFA provocateur” who had tried to interfere with law enforcement.

“@OANN I watched, he fell harder than was pushed,” the president wrote on Twitter. “Could be a setup?”

There is no evidence to support the claims about the man, Martin Gugino, a longtime peace activist who has been affiliated with human-rights groups and the Catholic Worker movement.

But One America News aired a segment that presented the false theory as reported news, as opposed to a baseless conspiracy. The segment would probably have faded into obscurity had Mr. Trump not chosen to amplify it to his nearly 82 million Twitter followers.

The One America News correspondent who narrated the segment, Kristian Rouz, is a Russian native who has also worked for Sputnik, a Kremlin-controlled news outlet, which was first reported by The Daily Beast. Sputnik has been accused by intelligence services of contributing to Russia’s efforts to interfere in American elections.

One America News, based in San Diego, was founded in 2013 by Robert Herring, a California businessman who made a fortune in the technology industry. The network rallied behind Mr. Trump in the 2016 presidential election, and its coverage increasingly shifted to cheerleading on behalf of the president and his administration.

Mr. Trump, a keen tracker of his media coverage, took notice. On Twitter and sometimes at public events, he often promotes One America News as a preferable alternative to Fox News, another network known for conservative opinion whose coverage occasionally rankles Mr. Trump.

The Herring family, in turn, has positioned One America News as a destination for pro-Trump viewers who feel alienated from more mainstream conservative outlets. Its White House correspondent, Chanel Rion, is now a staple of nationally televised news briefings, often called on by Mr. Trump’s press secretary, Kayleigh McEnany.

Ms. Rion’s questions tend to be soft ones, and she has parroted some administration talking points. She was also rebuked by her fellow White House correspondents after she attended briefings in violation of social distancing guidelines intended to protect journalists from the coronavirus.

Ms. Rion’s website describes her “as a fierce foe of anything Clinton, of everything Obama, and as a total and unrelenting enemy of academic left-liberalism and political correctness anywhere.”

In the segment about Mr. Gugino, the One America News reporter, Mr. Rouz, claims that “newly released video appeared to show Gugino using a police tracker on his phone trying to scan police communications during the protest.” The footage, as seen in the segment, offers no obvious evidence to back up that assertion.

The allegation of a link between Mr. Gugino and a far-left antifascist group referred to as “antifa” appears to have originated on Conservative Treehouse, a fringe right-wing website that has spread baseless conspiracy theories. The site bills itself as a “Rag Tag Bunch of Conservative Misfits.”

The unsubstantiated theory that antifa activists were responsible for riots and looting at the protests prompted by the killing of George Floyd, a black man who died last month after being pinned to the ground by a white police officer, was the biggest piece of protest misinformation tracked by Zignal Labs, a research firm that follows the spread of falsehoods in the media.

In response to an inquiry, a spokeswoman for One America News, Krista McClelland, wrote in an email on Tuesday: “From numerous sources, O.A.N.’s investigative team is aware of Mr. Gugino’s anti-police sentiment and statements.”

And Robert Herring, the network’s chief executive, claimed in a Twitter post that his network would present “follow-up reporting” to back up its claims about Mr. Gugino.

“Mr. President, you haven’t let us down on doing what you say and we won’t let you down as your source for credible news!” Mr. Herring wrote.