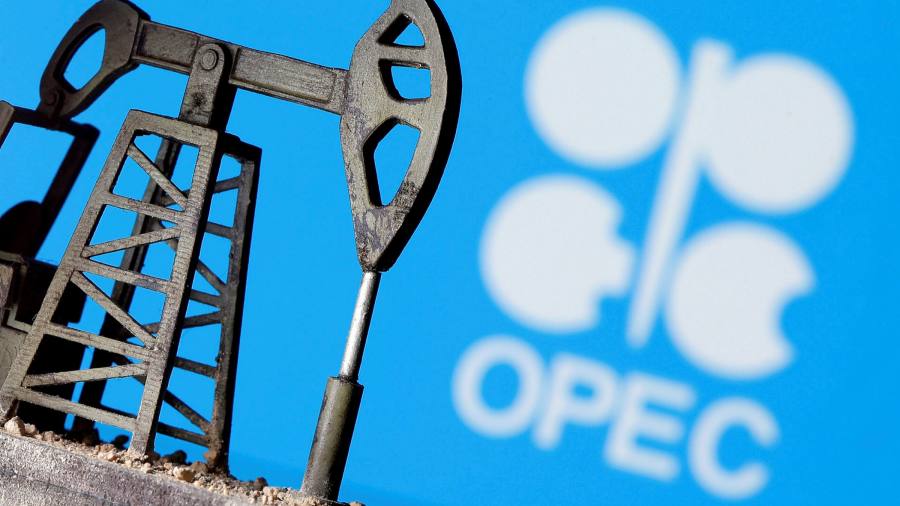 Opec and Russia have agreed to extend their record oil production cuts for a further month as crude recovers to near $40 a barrel, with the group attempting to prop up a market devastated by the coronavirus pandemic.

Saudi Arabia and Russia will continue to take the bulk of the nearly 10m barrels a day of cuts, but the two countries emphasised they wanted to see stronger compliance from other members as they held a virtual meeting on Saturday.

The latest agreement builds on a deal struck in April that brought an end to a price war between both countries that — in tandem with collapsing demand during widespread lockdowns — threatened to overwhelm global oil markets and ravage producer economies.

The deal was largely hammered out before the formal video meetings of oil ministers began, with oil’s recent recovery promoting widespread support for keeping the full cuts in place rather than tapering them from July as originally planned.

“It was unanimously agreed by Opec and Opec+ countries to extend the current reduction to the end of July,” said Suhail Al Mazrouei, the United Arab Emirates’ energy minister, after the meeting.

US energy secretary Dan Brouillette said on Twitter that he welcomed the deal at “a pivotal time as oil demand continues to recover and economies reopen around the world”.

The so-called Opec+ group is trying to balance providing support to the oil industry against not wanting to raise prices too quickly, with the world economy facing a steep recession.

But the continued co-operation of Saudi Arabia and Russia will provide an element of stability to an energy industry that has endured one of the most volatile periods in its history during the pandemic.

“The extension shows Saudi Arabia and Russia want to avoid the kind of acrimony that helped crater oil prices in March, but challenges lie ahead,” said Jason Bordoff at the Center on Global Energy Policy at Columbia University.

Opec still expects global oil demand to contract by around 9m b/d this year, from around 100m b/d pre-crisis, putting pressure on government revenues in oil producing economies, while the wider energy industry has had to slash spending.

Opec+ agreed in April to cut 9.7m b/d or almost 10 per cent of global supply in May and June, but was initially expected to ease these cuts from July to 7.7m b/d or roughly 8 per cent for the rest of the year as demand recovers.

In recent days delegates had discussed extending the cuts for up to three months, but Moscow was keen to begin easing the curbs sooner worrying too quick a recovery in oil prices would also bring back more supply from the US shale sector, which it views as a rival.

An additional 1m b/d production cut made by Saudi Arabia on top of the group-wide cuts will also end this month, with oil demand starting to recover as economies emerge from lockdowns. Global oil demand collapsed by as much as a third in March and April as travel bans and stay-at-home orders hit consumption.

Mexico, which has resisted participating since the deal’s inception, will not take part in this latest round of cuts, reducing the tally slightly to around 9.6m b/d from next month.

The extended deal will be welcomed in Washington. US president Donald Trump had put pressure on Saudi Arabia and Russia to reach the deal in April as the higher-cost US shale industry was hammered by lower prices.

On Friday, Mr Trump thanked Russia and Saudi Arabia for helping to save the US energy industry, which he said had been at risk of becoming “worthless”.

US oil production is still expected to decline this year, but most wells that had been halted after US benchmark prices briefly crashed into negative territory in April are now starting to return — a threat to prices that remain about half their level in January.

Global oil consumption has started to recover as lockdowns ease in North America and Europe, while China — the world’s second-largest oil consumer after the US — has seen domestic demand return almost to pre-crisis levels.

Saudi Arabia, Opec’s largest producer, will now lean on Opec members such as Nigeria and Iraq that have not fully implemented their mandated cuts to comply with the deal in the coming months.

Prince Abdulaziz bin Salman, the kingdom’s oil minister and son of the king, said earlier on Saturday: “We have grounds to be cautiously optimistic about the future. But we are not out of the woods yet . . . Effective compliance is vital.”

Nigeria’s minister of state for petroleum resources Timipre Sylva said on Twitter ahead of Saturday’s meeting that the country would make up for its higher production levels in May and June later in the year.

“Nigeria . . . subscribes to the concept of compensation by countries who are unable to attain full conformity,” Mr Sylva said.

Bjornar Tonhaugen at Rystad Energy said the extension would help draw down excess oil inventories by 3m b/d more in July than if the group had started to taper the cuts, or roughly 10 per cent of the near 1bn barrel stock build seen in the first five months of the year.

“The market has mostly priced this one-month extension scenario in, we believe, so the upside to flat price is fairly limited,” Mr Tonhaugen said.