Opec and Russia in crunch talks over oil output cut 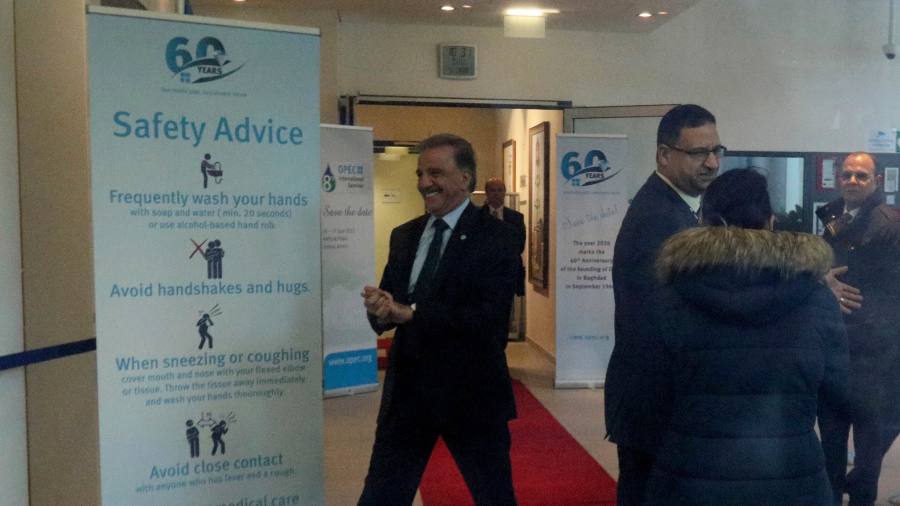 Oil prices fell further below $50 a barrel on Friday, hitting the lowest level in three years as Opec and Russia sat down for crunch talks in Vienna over how to respond to the coronavirus outbreak.

Opec’s members are proposing cutting production by an additional 1.5m barrels a day to try to support a market crippled by the drop in aviation and transport demand, with the world’s biggest traders forecasting oil consumption could contract for the first time since the financial crisis.

The deal could take total production cuts by the Opec+ group — which includes Russia and other producers outside the cartel — to 3.6m barrels a day, or almost 4 per cent of world demand, and would represent the biggest reduction in more than a decade. But Russia has so far not agreed to expand the deal, which is critical to its four-year-old oil alliance with Saudi Arabia, Opec’s de facto leader.

Russian energy minister Alexander Novak arrived back in the Austrian capital on Friday morning for meetings at the Opec secretariat, with uncertainty over the Russian position unnerving oil markets. Opec members have indicated the ball is in Russia’s court, and the whole deal could unravel without Moscow agreeing to take part in cuts, according to people briefed on the matter.

Brent crude, the international benchmark, fell as much as 5 per cent to a low of $47.02 a barrel, while US benchmark West Texas Intermediate hit a low of $43.28 a barrel.

Opec made the highly unusual move of updating its position officially on Thursday evening, saying in a statement it wanted the full 3.6m cuts to be put in place until the end of the year, rather than just until the summer as they had agreed among its members earlier in the day.

Russia has indicated it does not want to respond too hastily given the full economic impact of the coronavirus impact is not known, but analysts have cautioned that oil prices are likely to fall further if a deal cannot be reached. Crude has declined by almost a third since early January.

Jamie Webster, an analyst at Boston Consulting Group’s Center for Energy Impact, said that if Opec and its allies did not announce a substantial cut then prices could fall to lows last seen in early 2016, when crude traded near $30 a barrel.

“They have to act decisively or prices are going to sink,” Mr Webster said.

Energy consultancy Wood Mackenzie estimates demand fell by as much as 2.7m b/d in the first quarter, with China — the world’s second-largest oil consumer after the US — seeing a sharp drop in economic activity as Beijing tried to curtail the spread of the virus. With the coronavirus on the brink of becoming a pandemic, oil traders are concerned demand will start to be hit harder in the US and Europe.

Ann-Louise Hittle at Wood Mackenzie said oil demand could recover in the second half of the year but only based on the “assumption the coronavirus outbreak is largely contained within the next few months”.

“There is significant downside risk,” Ms Hittle added. “Should the duration and scope of the outbreak grow, it will magnify the economic impact.”

Analysts warned that the deal could still hang in the balance. “Unlike [his] predecessor Khalid al-Falih, Saudi energy minister Prince Abdulaziz [bin Salman] is willing to walk away if Russia does not contribute,” said Amrita Sen at Energy Aspects.

Most traders and analysts say they still expect some sort of deal to be reached, with Russia not being asked to cut as much as Saudi Arabia. Russian president Vladimir Putin has been a supporter of Moscow’s alliance with Riyadh, which has helped expand his influence in the Middle East.

Under the proposed plan it is possible Saudi Arabia’s oil production falls towards 9m b/d, more than 1m b/d below the level pumped in late 2018.

The Opec+ group has largely been reducing production since late 2016 as it was already under pressure from the US shale industry, which has ramped up production over the past decade.

Shares in the largest listed European oil and gas majors fell sharply, with BP and Royal Dutch Shell both down almost 4 per cent on the day. They have lost more than a fifth of their market capitalisation since mid-January.