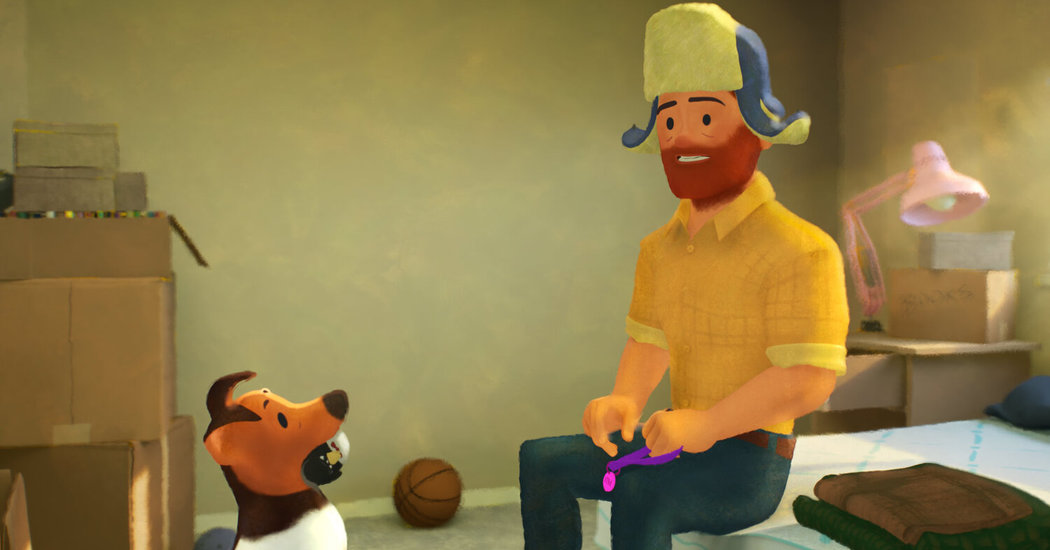 The man nervously practices in front of his dog how he is going to tell his parents he is gay.

“Just look them in the eyes and say, ‘Mom, dad, I’m — this is my boyfriend, Manuel,’” Greg says, holding a framed photo of himself with his boyfriend Manuel.

“Out,” a nine-minute animated film, is one of seven from Pixar’s SparkShorts program, which seeks “to discover new storytellers, explore new storytelling techniques and experiment with new production workflows,” Jim Morris, the president of Pixar, said on the studio’s website.

“These films are unlike anything we’ve ever done at Pixar, providing an opportunity to unlock the potential of individual artists and their inventive filmmaking approaches on a smaller scale than our normal fare,” he said.

“Out” introduces viewers to Greg as he gets ready to move to an unnamed city with Manuel.

“On an average day, Greg’s life is filled with family, love and a rambunctious little dog — but despite all of this, Greg has a secret,’’ reads the film’s description.

The secret? Greg is not out to his parents.

When his parents surprise him on moving day, he gets some help from his dog Jim. In a magical turn of events worthy of “The Shaggy Dog,” (1959), Greg and Jim temporarily switch bodies. In doing so, Greg learns the importance of being true to himself.

“Over the past few years, L.G.B.T.Q. characters and stories have become common in the kids and family entertainment space with little controversy, but with large celebration from L.G.B.T.Q. families with children who have longed to see themselves represented,” Jeremy Blacklow, director of entertainment media at Glaad, said on Sunday. “By centering on a young gay man, ‘Out’ just raised the bar for inclusion in kids and family programming.”

Kimberly A. Taylor, an associate professor of marketing and logistics at Florida International University in Miami, said that Disney and Pixar recognize that “representation matters” on the big and small screens.

“To see oneself, one’s community, onscreen helps one to feel valued and validated and gives an expanded sense of what’s possible,’’ she said on Sunday. “And on Disney-Pixar’s part, it’s also just good business. They obviously recognize that their audience, or potential audience, includes the L.G.B.T.Q. community, just as it includes people of all genders, races, ethnicities, religions and so on.”

Disney and Pixar have made strides in diversity and inclusiveness in some of their biggest franchises over the years.

In last year’s “Toy Story 4,” viewers saw two mothers dropping off and picking up their daughter from a day care center in the background.

Donald Glover, who played Lando Calrissian in the “Star Wars” franchise movie “Solo,” said in an interview with HuffPost that his resistance leader character was pansexual although that did not figure into the plot. In the 2019 Marvel movie “Avengers: Endgame,” there was a brief appearance by a gay character.

And in the 2017 live-action remake of “Beauty and the Beast,’’ LeFou, Gaston’s sidekick played by Josh Gad, was presented as gay.