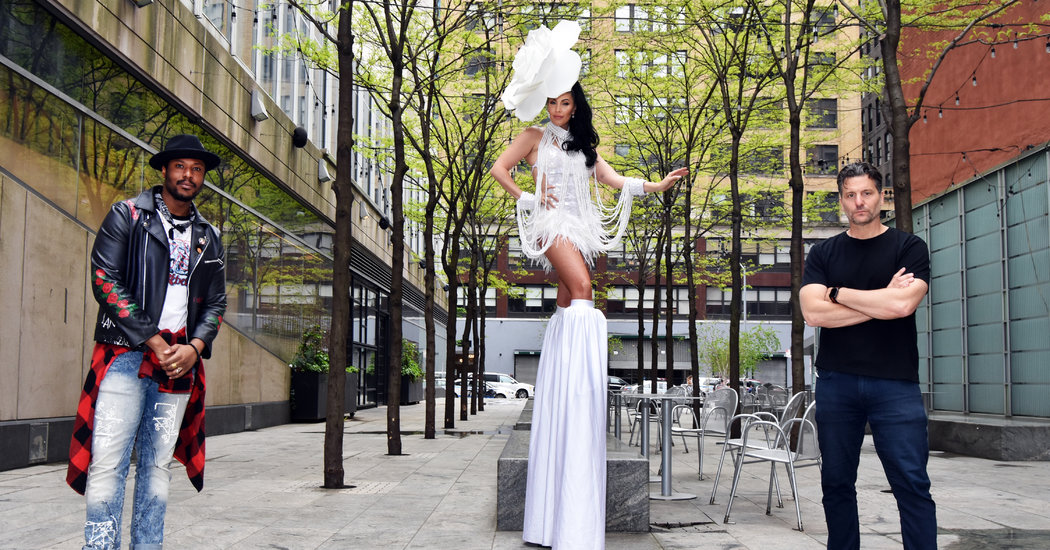 As New York City crawls toward reopening, even as momentous protests fill the streets, the formal events industry, predicated on people assembling en masse for merrymaking or shared purpose, remains in the dark.

Pre-pandemic parties may be mere surreal flashbacks to the average partygoer after sheltering in place for two months, but these events were the livelihoods of florists, catering companies, producers, D.J.s, performers and designers. The absence of social functions isn’t just a crushing financial blow for workers in the field; it’s psychic decimation for entrepreneurs who consider their businesses an extension of themselves.

“We were one of the industries that got hit the hardest,” said Ingrid Carozzi, 49, the founder of Tin Can Studios, a floral design company.

Ms. Carozzi, who now works out of the backyard of her apartment in the Clinton Hill neighborhood of Brooklyn, recalls picking up last-minute blossoms at the flower market in Chelsea on March 12 when she received a cancellation for that evening’s event. She’d been hired to decorate the Young Fellows Ball at the Frick, a Gilded Age mansion turned museum she was planning on adorning with her vibrant arrangements.

Unlike many party professionals who assumed Gov. Andrew M. Cuomo’s “shelter in place” mandate issued in late March might last a couple of months, Ms. Carozzi, who errs on the side of pessimism, sensed functions would cease for at least a year. “You’re going have to figure something out really fast,” she recalled telling herself. “You have to be laser focused.”

Boxes and a Brass Band

Businesses that supply tangible objects like flowers, food and beverages had a chance to adapt by offering home delivery to individual customers.

After Ms. Carozzi’s initial mini-crisis of being deemed “nonessential” and momentarily questioning if flowers were just a luxury, she started a new venture of boxed flower delivery, starting for Mother’s Day. Each box, which she named Bloom Box and has priced at $198, contains 70 stems, currently heavy on peonies and tulips in pinks, for customers to arrange bouquets at home. (She has also donated flowers to nurses.)

The only time Ms. Carozzi appears free of pandemic-induced anxiety, even as she gently manhandles her fluffy peach peonies and pink ranunculuses in vases on a rustic wooden table, is when she scrolls through her Instagram, where customers post images of their arrangements or organizing flower installations she’s planning for Black Lives Matters protests.

Still, the box business is about 15 to 20 percent of what she typically earns designing events.

Eat Offbeat, a catering company in the Long Island City section of Queens, switched quickly to home delivery in late March, at a time when ambulance sirens were omnipresent and the number of coronavirus-related deaths were rising at a terrifying rate.

Eat Offbeat typically serves food at events hosted by institutions like the Ford Foundation and Columbia University. Their dishes have origins in countries like Iran, Afghanistan and Syria, among others, as all the chefs are resettled refugees.

“Most of us have been through situations that feel very similar,” said Manal Kahi, 35, a founder, who is from Lebanon, of the upheavals in New York. When all their events were canceled, Ms. Kahi and her staff of 16 and a handful of part-time workers decided to introduce boxes of food for home delivery, rather than shut Eat Offbeat down and receive unemployment benefits. Employees used their own cars to deliver boxes, along with a hired driver, and they have delivered more than 800 boxes so far.

But producers, performers, designers and others who create immersive, sensory environments at events, now have limited ways to earn money. The market has become saturated with online classes, livestreams, lectures and other virtual experiences, and many of them are free.

On the Move Entertainment is a talent agency representing musicians and unusual performing artists, including aerial champagne pourers and stilt-walking geishas. Darren Olarsch, the founder, works out of a storefront office on West 30th Street in the NoMad neighborhood of Manhattan and has tried brainstorming ideas with the five remaining staff members, down from 13 — some furloughed, others laid off.

One suggestion was to expand on an act they already offered: a ballerina or violinist performing inside a clear vinyl bubble. “We were talking about buying more of those, making an orchestra or band, all of them in a bubble,” Mr. Olarsch said, which would ensure a safe, transmission-proof environment for gatherings.

“Then, I kind of vetoed it,” he said, thinking it was too dark. “I just can’t help but feel it just sets the wrong tone.”

He did book a New Orleans brass band, to play, socially distanced, for a birthday on the celebrant’s stoop, and a string quartet played outside for a marriage proposal. “That’s a pivot, I guess,” he said, with a reluctant laugh. “We ain’t getting rich on it!”

Mr. Olarsch said his business can financially weather the pandemic, but he’s concerned about his artists, nearly all freelancers who often live paycheck to paycheck and many of whom haven’t received unemployment benefits. “They are all sitting home right now and don’t know when they’re going to be able to get back on stilts,” he said.

Maria Kent, a dancer and stilt walker, said she hasn’t received any benefits, about six weeks after filing on April 4. After Ms. Kent came out of her initial “funk” because of not being able to perform, she decided to hone her aerial skills in her backyard for possible socially distanced entertainment options in the future.

Alberto Pierre, a singer who goes by Zaxai onstage, has received one grant from MusiCares, a fund created by the Grammys that offers aid, including to those affected by the coronavirus. He’s been using livestreams and social media to market himself. “I keep a positive mind-set,” Mr. Pierre said. “At the very same time, it’s like, how long can we sustain this?” He was recently hired by Mr. Olarsch.

Without the possibility of booked events in the foreseeable future, some business owners are moving to cheaper cities. Lisa Ann Markuson, 33, the founder of Ars Poetica, a company that dispatches poets to parties to write custom haikus on antique typewriters, is transitioning to copywriting and editorial projects. Since she can keep the company active remotely, she moved to Louisville, Ky.

Others are waiting and watching for restrictions on cultural institutions and event spaces to loosen; there are murmurs that museums could open in late summer or fall. Tinsel is a production company that designs events for the Guggenheim Museum and the Whitney Museum of American Art, among other institutions. Erica Taylor Haskins, 36, one of Tinsel’s three founders, would typically be working amid hundreds of party guests, armed with an earpiece, wire mic, walkie-talkie and phone.

Instead she dealt with client cancellations, postponements, cutting staff and costs, then hiring back half the staff, all while being supportive to another founder who gave birth at the height of the epidemic; the third founder is recovering from Covid-19.

This is Tinsel’s 10th year in business. “It went from being a banner year,” Ms. Taylor Haskins said, “to standing on the edge of the apocalypse.” In a pained tone, she described a big contract Tinsel had been negotiating with a media company and a spring gala for a museum that has been postponed.

Ruminating on the role of her company in an event-free world, she said, “What’s the functionality? Is it just to stay afloat? Is it to stay relevant? Is it just, you know, as a problem solver for our clients, whether we make money off of it or not? It’s kind of like a Venn diagram of all of those things.”

Although a few fall event inquiries are trickling in, no potential client is near signing a contract, Ms. Taylor Haskins said. She has recently been speaking on Zoom panels about racism and bias in the events industry, which is having its own reckoning.

There are few kind words for pandemic-related federal, state or city aid. Many business owners in the events industry applied for the Small Businesses Administration’s Payment Protection Program (P.P.P.), which pays for two or three months of payroll through forgivable loans. The application process has been described as a nightmare, or “hell exercise,” as Ms. Taylor Haskins put it.

The P.P.P. structure is helpful for companies that have managed to change their operations, like Eat Offbeat whose chefs are actively cooking and delivering food. But for the majority of event companies, which can’t offer services at all because of the cancellation of events, meeting the P.P.P. requirements that make the funds a grant has been challenging, and some could be returning it rather than keeping the money and having to pay it back with interest.

“There is just ambiguity and vagueness in the rules,” Mr. Olarsch said, “and what I can say unequivocally is that P.P.P. for the hospitality industry is useless. It’s horrible. It’s terrible. It’s ill conceived.”

Recent P.P.P. changes may prove to be helpful to the hospitality industry, Mr. Olarsch wrote in a later email: “Time will tell, as it only matters if we get back to doing events.”

Mr. Olarsch, 50, has remained in business through the Sept. 11 terror attacks, the 2008 financial collapse and superstorm Sandy. Recognizing the pandemic is of an entirely different magnitude, he still thinks gatherings could resume in some manner before a vaccine is created and widely available.

“I think we are months away from a normalcy,” Mr. Olarsch said, but he’s a “glass-half-full kind of guy.” (Many in this business, thankfully, are.) He’s hoping for some type of holiday season.

Ms. Taylor Haskins agrees and hopes that by the fall or winter her company can produce small gatherings, with health protocols in place. “Types of events that used to be one singular 500-person event,” she said. “Maybe it’s a series of 10, 50-person events.”

Ms. Carozzi, the florist, said, “I can’t even imagine when anyone’s going to start doing events again,” noting brides have postponed weddings until next summer; “one bride even postponed to 2022.”

However, she does have one rescheduled wedding, in October, and inquiries about weddings have trickled in over the past week. Ms. Carozzi said that outdoor events with strict laws about health could possibly resume with regularity, but “I don’t know. I mean, I honestly don’t have an answer.”

Even when individuals, companies and institutions return to some semblance of normalcy, it’s unclear whether they’ll have the discretionary funds to spend on eye-catching events. After the financial crisis, Mr. Olarsch recalled, “it was deemed so inappropriate by all corporate and even nonprofits to show any kind of extravagance.”

“I think there’s going to be high-end luxury events that are just much more private and much less audaciously shared to the public,” Ms. Markuson, of Ars Poetica, said. “People of means are going to want to celebrate milestones in their lives.”

But there is no question that even after over 21,000 coronavirus-related deaths in New York City thus far, and with political reform now top of mind for many, revelry will return some day, in some form.

“The human psyche needs to share the joy of celebrating,” Mr. Olarsch said. “No matter what it’s for.”