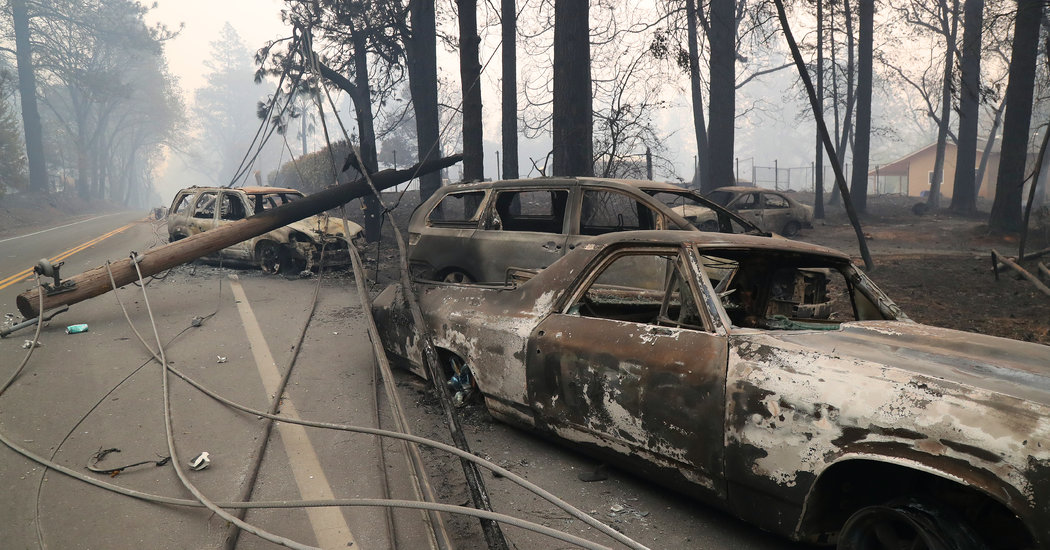 Marie Wehe, a grandmother, widow and cancer survivor, died in her truck on Nov. 8, 2018, while trying to escape the Camp Fire, an inferno that started when a transmission line broke from a nearly-100-year-old Pacific Gas & Electric Tower. She was one of scores killed in California’s most devastating wildfire.

In a rare acknowledgment of corporate wrongdoing, PG&E on Tuesday pleaded guilty to 84 counts of involuntary manslaughter for its negligence, ending a two-year ordeal for the families of victims like Ms. Wehe and survivors of the fire, which destroyed the town of Paradise.

PG&E, which had repeatedly failed to maintain the line even though it cut through a forested and mountainous area known to experience strong winds, also pleaded guilty to one count of illegally setting a fire.

The Camp Fire devastated lives and billions of dollars in property, but it also left PG&E struggling to survive, fending off creditors in bankruptcy court, a public furious about the company’s history of accidents and power outages and a governor who at one point threatened a state takeover. The company, California’s biggest utility, is expected to receive a judge’s approval soon for its plan to exit bankruptcy. Under that plan, the company will pay $13.5 billion to people who lost homes and businesses from wildfires started by its equipment, including the Camp Fire.

In a courtroom on Tuesday, the company’s chief executive, Bill Johnson, repeated “guilty, your honor” as he was asked to recount his plea over and over, 84 times, one felony count for each victim. The dramatic moment played out over a Zoom video stream in a nearly empty courtroom in Chico, Calif.

It is unusual for corporations to plead guilty to felonies and acknowledge that their negligence caused the deaths of dozens of people. What is perhaps even stranger is that this is not be the first time in recent years that PG&E has been guilty of serious crimes. But the relatively small size of PG&E’s financial penalties could rekindle concerns that large corporations often escape appropriate punishment for their actions.

As part of the plea agreement with the Butte County district attorney, PG&E has agreed to pay the maximum penalty of $3.5 million along with $500,000 to cover the cost of the county’s investigation. A state judge has to approve that agreement. Wall Street firms have paid much larger fines and penalties when settling cases stemming from the financial crisis of 2008.

In 2016, a federal jury convicted the company of safety violations and obstruction of an investigation into a gas pipeline explosion that killed eight people in 2010 in San Bruno, a town south of San Francisco. PG&E is still under probation for those convictions.

The judge overseeing the case, Michael R. Deems, has set aside time for people who lost loved ones in the fire to make statements at the hearing, which could last for several days.

Some survivors have criticized the plea agreement as a slap on the wrist for PG&E. They said local and state officials have repeatedly failed to hold the company, which serves about 16 million people in Northern and Central California, accountable for its failings because PG&E wields enormous economic and political clout in the state.

Ms. Wehe’s son, Tommy, told the court in a written statement that the last time he and his wife heard from her was the night before the fire, when his mother called to say PG&E was cutting off her power. Mr. Wehe said the company had not made amends for its mistakes. In fact, he said that the company dragged its feet when it came to settling claims with those who lost homes and loved ones in fires started by its equipment and, later, sought to chip away at the compensation it did agree to.

“They have put profits over people year after year and the state of California just keeps letting it happen,” Mr. Wehe said in his statement. “The company’s acceptance of guilt is inconsequential if the appropriate safety measures are not enacted to prevent the future loss of life and property.”

The California Public Utilities Commission separately fined PG&E almost $2 billion for its negligence in causing the wildfire. And the company could face additional penalties for violating the probation it was placed on after its six convictions for the San Bruno explosion. No company employees or executives are expected to face prison time.

The outcome of the Camp Fire case could also influence a federal judge overseeing PG&E’s probation arising from the gas explosion case. That judge, William H. Alsup, has the power to impose new penalties on the company for violating its probation.

California state law limited how much the district attorney could try to extract from PG&E for each manslaughter charge. And larger fines from regulatory agencies might have placed too large a financial burden on the company as it races to emerge from bankruptcy. “They are very much constrained by the need to keep a bankruptcy reorganization feasible,” said John C. Coffee, Jr., a law professor at Columbia.

Many individuals making wildfire-related claims against PG&E could have used the details of the Camp Fire case to bolster their cases against the company. But when PG&E filed for bankruptcy, wildfire claimants had to get in line with other creditors, which is why they chose to agree to a settlement in the bankruptcy.

Banks and companies that provide professional services are particularly at risk if they plead guilty because a conviction can prompt clients and employees to flee. But PG&E is a state-regulated monopoly and most of its customers cannot switch to another provider of electricity and gas.

“The reputational response is even more muted with an entity like PG&E, because it is pretty much the sole supplier,” said Jennifer H. Arlen, a law professor at New York University.

PG&E filed for bankruptcy protection in January last year after the utility’s equipment was implicated in several fires in 2017 and 2018. The company estimated its wildfire liability at $30 billion, much of it for the Camp Fire. The bankruptcy is PG&E’s second in about two decades.

About half of the $13.5 billion in compensation PG&E is paying wildfire victims will be in the form of company stock, leaving roughly 70,000 of them owning a little more than 22 percent of PG&E once it leaves bankruptcy. The company also plans to pay off its bond debt in full and its existing shareholders will continue to own a big chunk of PG&E, an unusual outcome in Chapter 11 bankruptcy cases like this one.

PG&E has pledged to improve its practices and reduce the risk of fires by, among other things, trimming and cutting trees along its power lines. Last year, the company also started turning off large parts of its electrical system during windy and hot days to prevent fires. But many Californians and elected leaders criticized the company for bungling its handling of the shut offs and leaving millions of people without electricity for days on end.

Last year, state lawmakers moved to make it less likely that PG&E or another California utility would have to seek bankruptcy for wildfire damages. Gov. Gavin Newsom signed a bill last year to create a $20 billion fund that will help cover the costs of future fires.

To qualify to participate in the fund, PG&E must compensate victims of previous fires, improve safety, replace its chief executive and appoint a new board. Mr. Newsom also got the company to agree that the state could take the utility over if it did not fulfill its obligations under the bankruptcy plan.

PG&E has complied with many of the governor’s requirements, but it is not clear how far it has gone in reducing the risk that its equipment will set another fire. California’s wildfire season, which started this month, is expected to be longer and more intense this year, state officials have said.