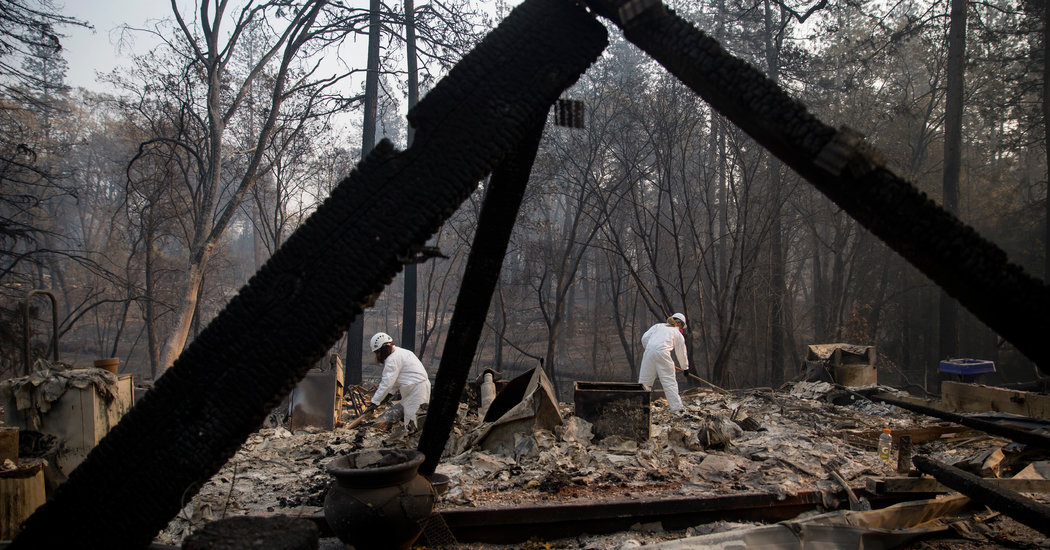 Pacific Gas & Electric and thousands of California families who lost homes or loved ones in fires caused by the utility’s equipment reached a $13.5 billion settlement in December, seemingly putting off a lengthy and fraught legal battle. The deal would allow the company to resolve its bankruptcy and provide homeowners money to rebuild.

But as a crucial deadline for a formal vote on the agreement nears, some victims are pressing the company to make changes.

A group of victims and their lawyers say they are worried that they will receive a lot less than $13.5 billion since half of that amount will be paid out in shares in PG&E. The company’s stock price has been whiplashed as the economy has been upended by the coronavirus pandemic. In addition, some victims said a leading lawyer who negotiated the deal on behalf of thousands of victims appeared to have a conflict of interest: He has borrowed money from a loan facility funded by two investment firms that purchased claims against PG&E, own stock in the utility, invested in PG&E bonds or helped finance its bankruptcy.

Two-thirds of the votes cast by the roughly 70,000 victims, most of whom live in Northern California, by May 15 must be for the deal for it to be approved. If the victims don’t ratify the deal, PG&E might not be able to resolve its bankruptcy by June 30, a deadline state lawmakers set for the company to qualify for a $20 billion wildfire fund that will help pay for future wildfire claims against privately owned utilities.

Bankruptcy court “votes are almost never cliffhangers,” said Jared Ellias, a professor at the University of California’s Hastings College of the Law. With thousands of victims casting votes, it’s hard to predict the result, he added, especially when factions are using social media, videoconferences and other methods to campaign for their desired outcome. “There are networks within the world of fire survivors, and that enables them to coordinate, if they want to, a ‘No’ vote campaign,” Mr. Ellias said.

PG&E, the largest utility in California and one of the biggest in the country, needs access to the state fund because its equipment has set off more devastating wildfires than any other company in the state as measured by liability claims against the company. The utility’s poorly maintained transmission grid ignited California’s deadliest wildfire in November 2018, the Camp Fire, which killed 85 people and destroyed the town of Paradise.

Victims who oppose the settlement and their lawyers say they want PG&E to either pay them the entire $13.5 billion in cash or guarantee that the stock portion will be worth no less than $6.75 billion. In addition, they want the company to formally commit to a timeline for making the payments; the current deal gives PG&E discretion on when it has to pay victims.

“The PG&E plan was a bad deal to begin with, but after this crisis, it’s beyond bad,” said Steven Kane, a San Diego lawyer who represents 300 victims. “It’s absolutely terrible and frightening.”

William Abrams, an entrepreneur and management consultant, lost his house in the 2017 Tubbs Fire that swept through Santa Rosa, north of San Francisco. He opposes the settlement and has been voicing his concerns to other homeowners. “In all the groups, there’s just heightened anxiety,” Mr. Abrams, 49, said.

PG&E declined to say if it was willing to adjust the settlement to win over people like Mr. Abrams. Each victim — a resident or business — has a single vote.

“Voting by claimants is underway and we continue to work diligently to obtain approval for our plan of reorganization by the bankruptcy court as soon as possible, so victims will be paid fairly and quickly,” the company said in a statement. “PG&E’s plan is the best method for victims to receive compensation.”

People opposed to the settlement say their concerns were only heightened when they recently learned that a lawyer, Mikal Watts, who claims to represent 16,000 fire victims, acknowledged receiving a line of credit funded by two investment firms with financial ties to PG&E..

Mr. Watts, a trial lawyer from San Antonio, has amassed more clients in the PG&E bankruptcy than any other lawyer. He advertised on billboards and in newspapers in areas that suffered fires in recent years, and tapped the environmental activist Erin Brockovich, who gained fame for her work on a water pollution case against PG&E, as a consultant to help recruit clients. Mr. Watts said he did not pay her directly but part of the team of lawyers he works with contracted with her.

In a December town hall at the Flamingo Resort in Santa Rosa, Mr. Watts told some of his clients that he had been offered a credit line by Stifel, an investment bank, according to a video of the event. He said he later learned that Stifel sold some of that debt to Centerbridge Partners and Apollo Advisors, private equity firms that had bought shares and bonds in PG&E. In an interview, he said the credit line was $100 million at 18 percent interest over four years.

Mr. Watts said he had privately met with Gavin Baiera, a senior managing director at Centerbridge, who has represented the firm in negotiations about PG&E’s bankruptcy. He described the meetings as social interactions.

Mr. Watts said that he did not see a conflict of interest and that he had disclosed his loan from Centerbridge and Apollo to clients. “I got the loan from Stifel,” Mr. Watts said. “Like most general credit facilities, those facilities are syndicated and may be assigned out without the knowledge or consent of the borrower.”

Mr. Baiera did not respond to a request for comment.

Apollo said in a statement that there was no conflict of interest because lenders like it had no ability to influence Mr. Watts. Apollo said it owned less than $20 million of the credit line to Mr. Watts’s law firm and the money is not dedicated to its work on the PG&E bankruptcy.

Still, Mr. Abrams contends that Mr. Watts’s relationship with Centerbridge and Apollo could have compromised his representation of wildfire victims. Mr. Abrams and several lawyers representing other victims have asked the federal judge overseeing the bankruptcy, Dennis Montali, to review funding of lawyers in the case for potential conflicts.

At least one wildfire victim, Debbie Pool, said she fired Mr. Watts’s firm because his associates were pushing her to accept the settlement, including by repeatedly calling her. Ms. Pool, who works as an aide for students with special needs, lost the Paradise home she rented in the Camp Fire.

“The more I read the proposed settlement, the more disturbed I am,” said Ms. Pool, 52.

Mr. Watts said his firm had told clients that they could vote as they desired.

It is hard to know how many victims might vote against the settlement. Some homeowners acknowledge that the deal is flawed but said they were ready to accept it so they could move on.

David Traversi, an entrepreneur and author with a law degree, lost his 3,500-square-foot home near Santa Rosa in a 2017 fire. He and his wife had expected to live in the home for the rest of their lives.

Mr. Traversi, who has advised bankruptcy courts in a handful of cases, said he had expected to get little to nothing from the utility once PG&E filed for bankruptcy protection last year. So he considers the $13.5 billion deal a godsend.

“That’s great; that’s amazing,” Mr. Traversi said. “That’s something I would not have expected, cash coming out of this.”

He has been advising his neighbors to vote for the agreement. Mr. Traversi’s lawyer, Gerald Singleton, of San Diego, said his firm and four others that include Mr. Watts’s had received more than 20,000 “Yes” votes as of Monday.