Plant-based fish and new packaging: How Bumble Bee tuna is trying to make a comeback 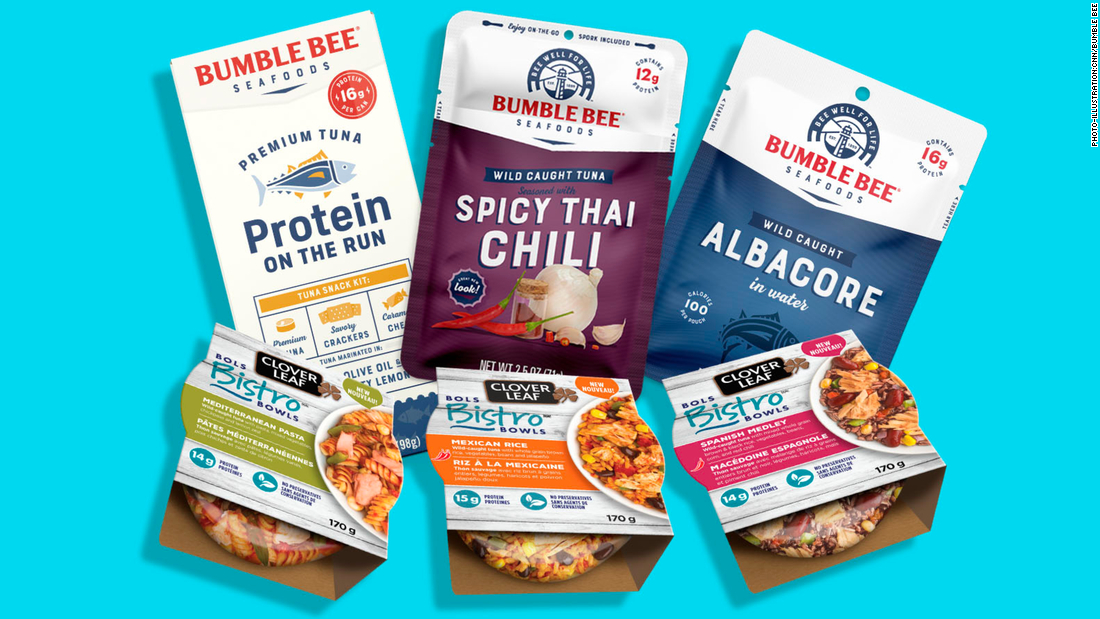 The canned tuna industry has faced all manner of scandals over the past several years. Along with its competitors, Bumble Bee was implicated in a price-fixing scheme four years ago. Bumble Bee agreed to plead guilty for its role in the conspiracy and to pay a $25 million criminal fine. And last year, the company filed for bankruptcy, blaming its “recent and significant legal challenges.” It has since been acquired by FCF, a Taiwanese fishing company.

And Americans are eating less canned tuna. According to a 2018 report from the National Oceanic and Atmospheric Administration, annual per capita consumption of canned tuna has been falling steadily for decades, from 3.7 pounds in 1990 to 2.1 pounds in 2018.

But Jan Tharp, Bumble Bee’s CEO since 2018, says things are looking up.

“We are super excited about our future,” she told CNN Business.

Over the past year and a half, she said, Bumble Bee has been working behind the scenes to revitalize its business. Now, the company is ready to reveal some of its efforts, including new products, a sleek, updated design and a partnership with a plant-based tuna company.

New products and a new look

Bumble Bee is chasing customers by revamping its own image.

For too long, Bumble Bee failed to keep up with the times. New products and new packaging can help, said Tharp.

Tuna should be on-trend, she argued. It’s a good source of protein that is low in calories and free of sugar. “There’s absolutely no reason why the category should be down,” she said. Overall, she said “the industry can do a better job” of selling its product.

To better connect with today’s consumers, Bumble Bee spoke to about 10,000 customers over the course of a year, Tharp said, to get a better sense of what they’re looking for. They kept those insights in mind when developing new products and packaging.

This year, Bumble Bee plans to start selling new microwavable “bistro bowls,” low-calorie meals containing tuna, vegetables, and rice or pasta. It is also rolling out new “protein-on-the-run” snack packs, with crackers, a sea salt caramel chew and tuna in olive oil and zesty lemon, black pepper or sweet jalapeno. And it’s launching nine flavors of tuna in pouches, equipped with a spork so people can eat on the run, as well as a similar product in an easy-to-open can with a clear lid.

The company has already been selling tuna in pouches, and the format is performing well. Sales of the product popped 40% by volume in 2019, according to the company.

In addition to launching new flavors and packages, Bumble Bee is rolling out a new, nautical look. Gone is the chef-bee mascot, which can be found peeking over labels on some cans and pouches.

The new packaging calls out the amount of protein per container, features images of the ingredients lending flavor (like onions and chili pepper) and has new messaging. One pack reads “bee well for life,” positioning the product as a health food.

In addition to revamping its own image, Bumble Bee is partnering with a plant-based tuna company to attract new customers.

Moving in on plant-based tuna

Interest in plant-based alternatives to animal products has exploded. The trend kicked off with dairy substitutes, like soy and almond milk, and has been gaining steam with meat substitutes popularized by Impossible Foods and Beyond Meat (BYND).

Many expect plant-based seafood to be the next big thing. Tharp agrees.

“Seafood is coming,” she said. “Our customers are looking for that type of option.”

Bumble Bee plans to help with Good Catch’s sales and distribution through the joint venture.

The partnership is a “win-win,” said Tharp. It should help Good Catch scale, and give Bumble Bee a way into a potentially lucrative market. Barclays has predicted that the alternative meat sector could reach about $140 billion in sales within the next ten years. And the Good Food Institute, a nonprofit that supports plant-based businesses, wrote in a 2019 report that plant-based seafood could “potentially exceed growth rates in the broader plant-based meat category.”

The Good Catch deal may also help convince customers that Bumble Bee is serious about sustainability.

People who are concerned about meat’s environmental impact may have similar concerns over fish. Lost or discarded fishing equipment contributes to plastic waste in the ocean and poses a threat to marine life. Plastic pollution could be dangerous for people, too, if microplastics end up in our food supply. Sustainability is a concern among young people especially, noted Choi.

“We do understand and share the concern regarding the impact of plastic in the ocean, especially as it relates to the pollution aspect of it as well as human health,” said Tharp. “We do take that subject extremely seriously, and we know that there’s a lot of work and research that still has to be done.”

Bumble Bee is working with the National Fisheries Institute and Michigan State University to support research in the area, she said, adding that it has also joined the Global Ghost Gear Initiative, which aims to remove fishing debris from the ocean.

The company is also working to mitigate its impact on the ocean and marine life by tracing where its products come from. It is also is working with third-party auditors to try to enforce better conditions on fishing boats and in factories, Tharp said.