Policymakers and the Pandemic: Now What? 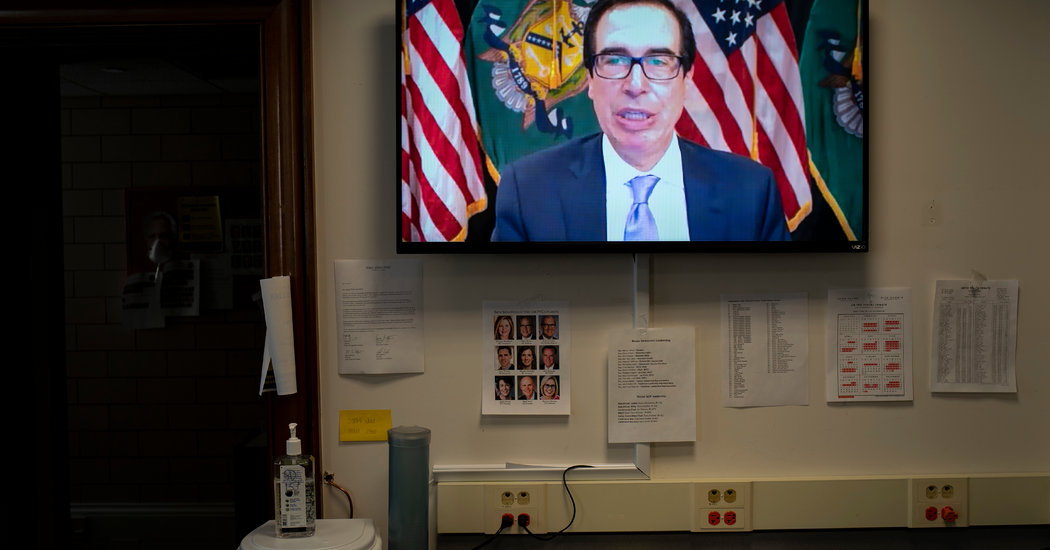 ‘A level of pain that is hard to capture in words’

The Fed chairman, Jay Powell, and Treasury Secretary Steven Mnuchin testified (virtually) before the Senate yesterday, and both described the economy in gloomy terms. But they differed about how to fix it, according to The Times’s Alan Rappeport and Jeanna Smialek.

Mr. Powell pushed for robust policy action. The Fed chairman said the economic devastation was “hard to capture in words,” and continued to hint that fiscal policy could do more. Struggling state and local government budgets could delay the recovery, he added, citing evidence from past recessions. Ultimately, better times require “a combination of getting the virus under control, development of therapeutics, development of a vaccine,” he said. It’s up to policymakers to bridge the gap until then.

Mr. Mnuchin called for a rapid reopening. “There is the risk of permanent damage” if states delay, the Treasury secretary said. Activity should pick up in the second half of the year as restrictions are lifted, he added. At the same time, he promised to put all of the $500 billion allocated to his agency to work in rescue programs, and said that “our intention is that we expect to take some losses.” That appeared to answer criticism that the Treasury was being too timid by insisting that all stimulus funds be repaid.

Things will get worse before they get better, Mr. Powell and Mr. Mnuchin agreed. The nonpartisan Congressional Budget Office also published a bleak forecast yesterday: The unemployment rate will spike to around 16 percent next quarter, it said, and remain in double digits through early 2021. G.D.P. will drop sharply this quarter — 38 percent at an annual rate — before snapping back later in the year.

• Although quarter-to-quarter growth may look strong during the recovery, the overall size of the economy won’t return to its pre-pandemic level until the third quarter of 2022, the C.B.O. estimates.

Now what? David Leonhardt, who writes our sister newsletter The Morning — which has a new look and is worth checking out if you don’t get it already — argues today that there “seems to be a growing recognition in Congress — among members of both parties — that the execution of the stimulus program hasn’t been the main problem. The design of the program has been.”

• Many other countries have focused on paying workers’ salaries to avoid mass layoffs, but America has a patchwork of programs.

• House Democrats are proposing paycheck subsidies for the next phase of stimulus, to skepticism from Senate Republicans — but the idea isn’t dead, as David notes:

About that Moderna rally …

Shares in the biopharma company soared after it released promising early findings on its coronavirus vaccine candidate. Then came the reality check.

Global stock markets jumped after Moderna’s announcement that its potential vaccine had generated an immune response in a handful of early trial subjects. (The company’s C.E.O., Stéphane Bancel, said he couldn’t have expected better results.) The drugmaker’s market cap rose to nearly $30 billion, though it so far has no products on the market.

But Moderna’s claims didn’t come with data, the health news publication Stat pointed out. “I do think it’s a bit of a concern that they haven’t published the results of any of their ongoing trials that they mention in their press release,” Anna Durbin, a vaccine researcher at Johns Hopkins, said.

• Stat also noted that the National Institute for Allergy and Infectious Diseases, which partnered with the company on the trial, hadn’t said anything about it.

Markets are clearly hungry for any good news. Bloomberg Opinion’s John Authers notes that Moderna’s surge “shows the depth of desire for someone to come up with a vaccine that can short-circuit what looks like being at least another 12 months of nervousness, fear, ever more fractious politics, and a sluggish economy — and that the current price is based on some bearish assumptions.”

• Moderna’s share price is down more than 10 percent from its high, but still up about 250 percent so far this year.

It isn’t just banks that are considered systemically important these days. The U.S. government is now propping up nearly the entire private sector, The Times’s Matt Phillips notes.

The federal safety net is much wider than in 2008, stretching over energy companies, airlines and huge parts of the corporate bond market.

Critics are worried about a rise in zombie companies that can’t survive without Uncle Sam’s help. And restrictions that come with bailouts could limit companies’ ability to do things like buy back stock, ultimately putting a cap on their shareholder returns.

• House Democrats will move next week to ease restrictions on how small businesses can use Paycheck Protection Program loans.

• Shoppers are slowly returning to U.S. and Canadian retailers. Foot traffic last week was down a mere 92 percent from a year ago (the week before, it was down 95 percent).

• Johnson & Johnson will stop selling talc-based baby powder in North America, after lawsuits from people who say it caused cancer. The company will continue to sell baby powder made with cornstarch, and to offer the talc-based product in other parts of the world.

• At JPMorgan Chase’s annual meeting, a shareholder proposal demanding more disclosure of the bank’s impact on the environment came within 0.4 percent of passing. But the former Exxon C.E.O. Lee Raymond, who has drawn opposition from climate activists, was easily re-elected to the board.

• Spotify locked up Joe Rogan, the hugely popular podcast host, to a multiyear exclusive licensing deal that could pay him more than $100 million. News of the deal sent the streaming service’s shares up 11 percent.

After the pandemic, the protectionism

Each month, Bank of America surveys fund managers on a variety of issues. Between them, those who answered its latest poll control nearly $600 billion in assets, and one result caught our eye.

The coronavirus won’t bring the world together. Fund managers said that the most likely structural shifts after the crisis were “supply chain reshoring” and a “rise in protectionism.” The least likely were “introduction of universal basic income” and “growth based on global trade cooperation.” Spot the pattern?

• Richard Branson sold $41 million worth of Virgin Galactic stock to raise money for his other businesses. (Business Insider)

• The Trump administration is using the Taiwanese chip maker T.S.M.C. as a weapon against China and Huawei. (NYT)

• Walmart is shutting down the online retailer Jet.com, four years after buying it for $3.3 billion. (Business Insider)

• The British town of Milton Keynes is relying on delivery robots during lockdown. (NYT)

• Something else delayed by the pandemic: the retirement of the financial guru Suze Orman. (NYT)

• The quarantine gardening boom includes a lot of cannabis. (Quartz)