Premarket stocks: Investors could get a one-two punch of awful news today 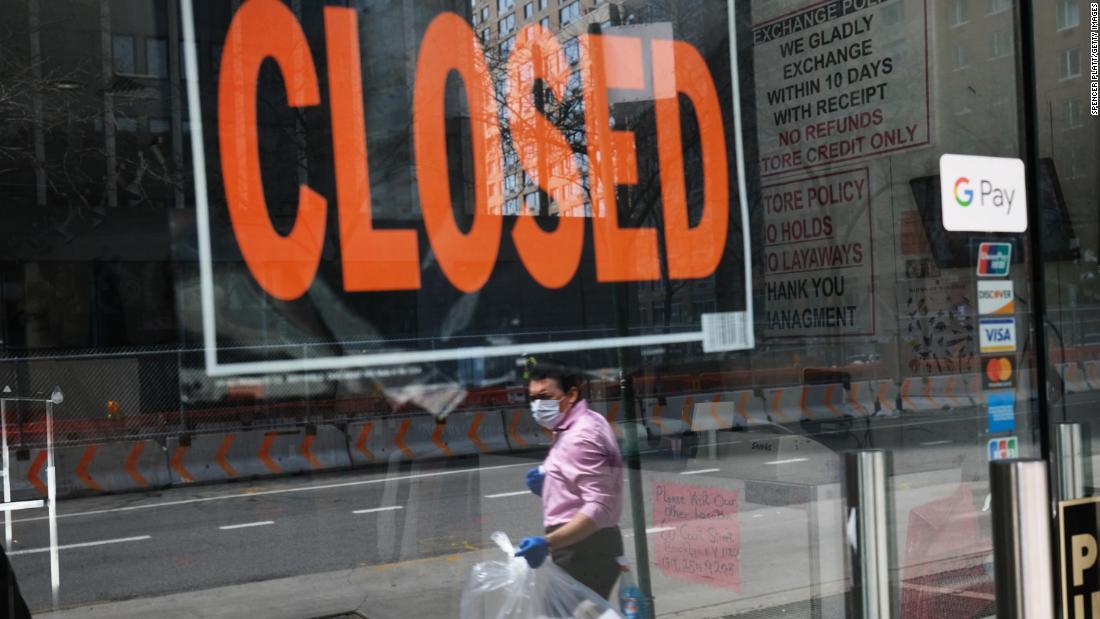 “While it is painfully obvious that activity dropped sharply recently, plenty of related questions remain,” Michael Feroli, chief US economist at JPMorgan, said in a recent note to clients. “How large of a downturn occurred? Has the economy bottomed out? When will activity pick up again? And what will the ‘reopening’ of the economy look like?”

The bank now forecasts that GDP fell at an abysmal annualized rate of 11.2% in the first quarter, because of a huge hit to the services sector and weak trade.

That’s much worse than the overall view of economists surveyed by Refinitiv, who expect a 4% contraction on average. That would still be the sharpest contraction in more than a decade.

The other big event on Wednesday is a press conference by Federal Reserve Chair Jerome Powell after the latest meeting of the central bank.

The Fed isn’t expected to make any big policy decisions, given that it’s already taken major action over the past two months. The central bank has pushed interest rates close to zero and launched a raft of programs aimed at spurring lending and easing conditions in credit markets, dramatically ramping up its purchases of bonds.

But investors will still tune in for a status update on efforts taken so far as well as the central bank’s outlook for the rest of 2020 and 2021.

Jim O’Sullivan, chief US macro strategist at TD Securities, told clients in a recent note that he expects the Fed to hold the line.

“The tone will almost certainly remain dovish … and the Fed’s balance sheet is likely to keep growing rapidly,” O’Sullivan wrote.

Setting the stage: Comments from the Fed will be followed by the European Central Bank’s meeting on Thursday.

Big Tech is weathering the storm … so far

The world’s biggest tech companies are proving they can weather the coronavirus storm better than most — but they’re still concerned about what the future holds.

Shares of Google parent Alphabet (GOOG) are up nearly 8% in premarket trading after the company posted strong results for the January to March quarter, beating expectations on revenue.

“Alphabet gave credence to the tech bull thesis, especially with engagement and advertising holding up,” Daniel Ives, an analyst at Wedbush Securities, told me.

Lending a boost: People are spending more time on Android apps, and YouTube watch times have “significantly increased,” according to CEO Sundar Pichai.

The company’s cloud division is also a source of strength during uncertain times as people are forced to work from home, relying more on cloud infrastructure.

Investor insight: The results are helping to lift other US tech stocks, too. Shares of Facebook (FB) and Microsoft (MSFT), which both report earnings after US markets close on Wednesday, are up nearly 4% and 2%, respectively.

But even Alphabet is warning that it could suffer the longer the crisis stretches out. The company said its ad revenue experienced “a significant and sudden slowdown” in March following a wave of global shutdowns.

“Recovery in ad spend will depend on a return to economic activity,” Pichai said.

The world may never recover its thirst for oil

The world is learning to live with less oil. It may never look back.

The coronavirus pandemic has destroyed demand for gasoline and jet fuel as billions of people stay home, and there’s no guarantee it will ever fully recover despite rock-bottom prices, I report in a new story just posted on CNN Business.

The oil industry is bracing for the effects of the crisis to linger. Employees keep working from home. International travel stays scarce. And citizens in once polluted cities, having become accustomed to blue skies, demand tougher emissions controls, encouraging governments to redouble efforts to tackle the climate crisis.

Such changes would come on top of a push for investors to dump oil assets that had been gaining momentum before the recent price crash. Sustainable energy investments, by comparison, appear to have held up relatively well despite stock market volatility.

“I think the pressure to accelerate the forces driving the energy transition will only increase as a result of this crisis,” Mark Lewis, global head of sustainability research at BNP Paribas Asset Management in Paris, told me.