Premarket stocks: Why it pays to be a chain during a pandemic 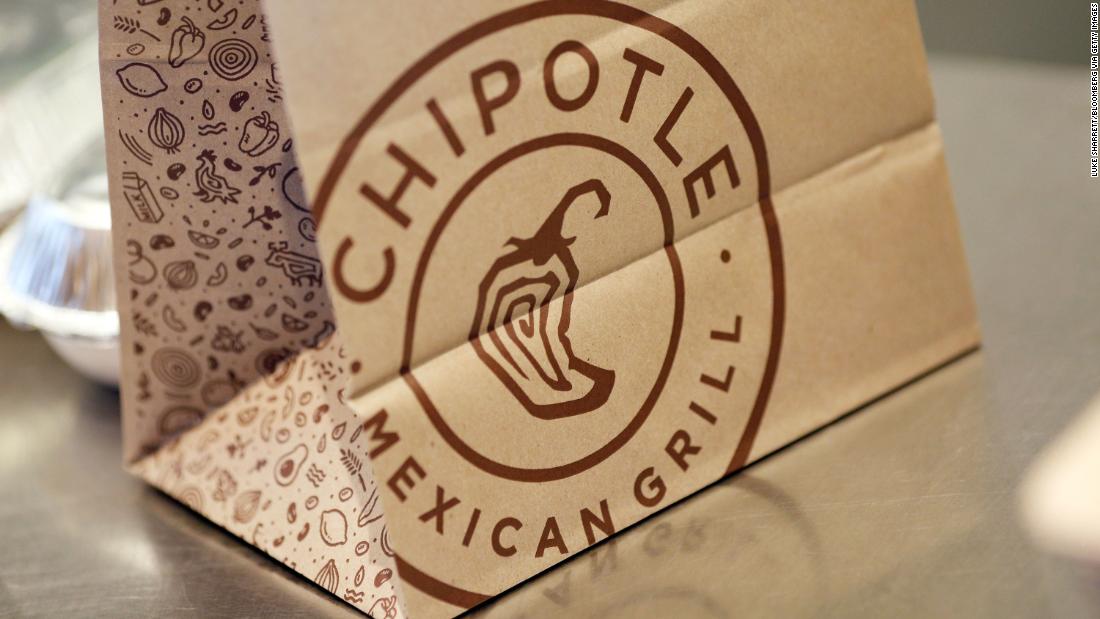 What’s happening: A new analysis by Bank of America found that spending at big restaurant chains has “largely recovered,” while small chains and independent eateries remain under pressure. It pointed to Chipotle (CMG) as one player with a big presence whose shares could rise over the longer term.

Chipotle’s stock is up 33% this year. The company’s investments in technology — one of such advantages — have helped it pivot to delivery and takeout, with digital sales shooting up 81% in the first quarter. Meanwhile, its commitment to food safety protocols following past scandals allowed it to quickly implement safeguards specific to the coronavirus.

Why it matters: Scale allows companies to paper over issues at struggling locations and spread out costs associated with new safety measures. That flexibility could be crucial as Covid-19 cases rise across parts of the United States, forcing at least two dozen states to pause or roll back reopening plans.
Still, size isn’t a panacea. Walgreens said Thursday that it’s cutting 4,000 jobs at its UK pharmacy chain Boots, which kept most of its stores open through lockdown. The company cited a “dramatic decline” in footfall.

UK shoppers are making a tentative return to shops as lockdown restrictions ease, according to a report Friday from the British Retail Consortium and ShopperTrak, a research firm.

But the country’s High Streets, which host the top chains, remain under strain. Footfall declined by nearly 65% year-on-year in June. As non-essential stores began to reopen in second part of the month, traffic improved — but was still down 58% compared to 2019.

Governments are frantically trying to get people to feel comfortable shopping and dining out again. Earlier this week, UK finance minister Rishi Sunak announced that meals at participating restaurants, cafes and pubs will be discounted by up to £10 ($12.61) per head from Monday to Wednesday for the month of August.
The path the virus takes could dictate the success of these efforts, however. In the United States, high-frequency data indicates that the number of seated diners at restaurants has been sliding since the July 4 holiday weekend as cases shoot up in some states.

There are signs of a pullback in activity even in states that have not reimposed restrictions, Andrew Hunter of Capital Economics told clients this week. That indicates that fears about the virus could outweigh messaging from the government — which would hit chains and independent stores alike.

Oil supply hit a nine-year low in June as OPEC, its allies and producers in the United States pulled back to meet diminished demand for energy, the International Energy Agency said in a report released Friday.

That’s helped push Brent crude futures, the global benchmark for oil prices, back above $40 per barrel. But the agency warned that the recent rise in coronavirus cases and the return of partial lockdowns “introduces more uncertainty into the forecast.”

“While the oil market has undoubtedly made progress since ‘Black April,’ the large, and in some countries, accelerating number of Covid-19 cases is a disturbing reminder that the pandemic is not under control and the risk to our market outlook is almost certainly to the downside,” the IEA said.

The agency now expects demand to plunge by 7.9 million barrels per day this year, a slightly smaller decline than forecast in its previous report.

The April to June period wasn’t quite as bad as expected, it said, with demand rebounding “strongly” in China and India this spring. In China, transport fuel deliveries actually surpassed 2019 levels in April and May.

That said: Globally, demand for transport fuel is still “much lower” than it was one year ago, per the IEA.

And it’s difficult to predict the effect of a virus resurgence in some regions. One one hand, a spike in cases could push more people to use cars, which would prop up fuel demand. But it could also just serve to reduce the amount of people moving around, limiting demand for energy.

Watch this space: Demand could also take a hit if governments enact large-scale clean energy programs as part of their economic recovery plans. The International Energy Agency hosted a summit Thursday with 40 government ministers to discuss how to reduce global emissions while boosting the economy.

A ‘dangerous new normal’ for the US job market

Week after week, the number of initial unemployment claims filed by Americans has declined. But the overall scale of applications for jobless benefits has remained stubbornly high, feeding fears among economists that the recovery is running into trouble.

The latest: Initial claims for the week ending July 4 came in at 1.3 million, down slightly from 1.4 million the previous week. That’s well below the apex of nearly 6.9 claims reached in late March.

James Knightley, chief international economist at ING, told clients that jobless claims have proved “far stickier than most analysts thought likely as the reopening got underway.”

The numbers should bolster Congress’ resolve to pass additional stimulus measures, which are currently locked in partisan negotiations, said Joseph Brusuelas, chief economist at RSM. But he warned that “fiscal fatigue” appears to be taking hold.

The US Producer Price Index for June, a key gauge of inflation, posts at 8:30 a.m. ET.

Coming next week: Earnings season kicks off with the biggest US banks, which are bracing for a wave of credit losses due to the recession.