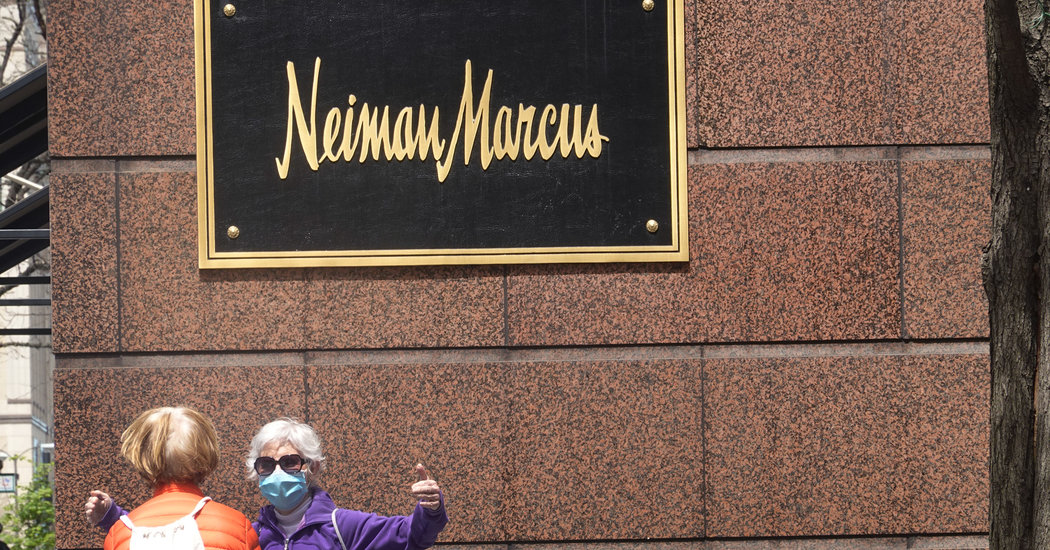 Retailers fall to the pandemic, and private equity

J. Crew and Neiman Marcus faced a host of issues before the pandemic forced them to file for bankruptcy protection. One increasingly common problem that such struggling retailers face is a huge debt burden left by leveraged buyouts, The Times’s Sapna Maheshwari and Vanessa Friedman write.

Private equity firms have been involved in fashion for decades, drawn by mature, cash-generating businesses that were often run by founders or families that could be shaken up and streamlined — think Gucci, Bally, Valentino, Jimmy Choo and Moncler.

• Neiman Marcus was taken off the market for about $5.1 billion in 2005 by TPG and Warburg Pincus, then sold in 2013 for $6 billion to a group including Ares Management.

Fashions change, and for retailers that struggle to keep up with style trends and shifts in the industry, spending large sums on dividends, fees and interest payments gives them less wiggle room to react.

• A report last summer said that 10 of the 14 largest U.S. retail chain bankruptcies since 2012 had featured private equity ownership — the highest-profile being Toys “R” Us in 2017.

This could become a hot-button political issue, especially as private equity firms lobby for aid in pandemic stimulus plans. “If there is a big retail bankruptcy or liquidation with a lot of job losses and P.E. is involved,” said Sandeep Dahiya of Georgetown University, “that would be like catnip to politicians, because retail is something that touches you and me — unlike, say, chemicals.”

A group of 41 strip clubs in Michigan won their case this week against the Small Business Administration, whose rules exclude businesses of a “prurient sexual nature” from receiving its assistance, including the pandemic rescue loans.

• The judge said that the program’s rules mandated simply that “any business concern” with fewer than 500 employees was eligible for loans. A similar case brought by a chain of strip clubs in Wisconsin this month also concluded in their favor.

A precedent could be set for other blacklisted businesses, writes Alexander Saeedy for subscription-only LCD News. A longstanding rule at the agency excludes “prurient” businesses along with banks, nonprofits, life insurers, political lobbying firms and companies. Experts Mr. Saeedy spoke to suggested that the ruling appeared to apply to any of these businesses previously deemed ineligible.

• That means that a nonprofit food bank may be able to receive a forgivable rescue loan thanks to the lawyers for Diamond Girls Showbar in Flint, the lead plaintiff in the Michigan case, and Silk Exotic’s Gentlemen’s Clubs in Milwaukee and Madison.

How things will change

As lockdowns lift, we’re getting a glimpse of the “new normal.”

🍔 When restaurants reopen their dining rooms, suggests a 59-page playbook sent by McDonald’s to franchise owners, everything will get cleaned a lot more often. Extensive signage will guide customers around the floor and away from certain tables to ensure that they keep their distance.

🏫 Schools could become “flipped,” with students watching lectures at home and coming in only for group assignments and individual tutoring.

✈️ Airports will be “even more of a bummer,” Bloomberg writes, with lines of passengers at check-in that could stretch for miles.

🏖 Guests at hotels will be greeted by temperature checks, mandatory masks and hand-sanitizing routines. Furniture will be removed from public spaces, and a one-way system may be imposed on the floors.

💼 In offices, A.I.-enabled cameras that once tracked how space is used and controlled the lights and temperature may be redeployed to enforce social distancing.

By invitation: Vikram Pandit on the new financial infrastructure

Vikram Pandit is the chairman and C.E.O. of the Orogen Group and a former C.E.O. of Citigroup. Here, he imagines what a more efficient, effective and inclusive financial system would look like in America.

The severity of the pandemic makes it clear that there is just one bank that matters, the Federal Reserve, and one insurer, the U.S. government. Their quick actions to fight the economic fallout should be lauded. While well intentioned, these moves have been anything but precise.

Outdated technology makes it hard to ensure that relief money gets to the right people and the right places. But this isn’t simply a failure of technology. For the government to fulfill its role, it needs new infrastructure to act as an effective, efficient underwriter.

Other countries consider digital financial infrastructure a public good that’s indispensable for economic policy. They understand that such a utility is too important to be outsourced to banks and a few other institutions.

Regulators and governments have played a central role in designing new architectures for the industry, working hand in glove with the private sector.

From India to Kenya to Singapore, governments are exploring financial services architecture that works for everyone, including biometric identifiers for individuals; digital wallets linked to banking and payments systems; permissioned links to private and public databases and documents with e-signing privileges; and business portals that include utilities for know-your-customer and anti-money-laundering compliance.

Some countries have promoted financial inclusion by giving every citizen a digitized bank account. And some see the combination of digital wallets and central bank-issued digital currencies — C.B.D.C.s — as the way to transition to a 21st-century financial system in one fell swoop.

What is holding the United States back?

When one of the economic stimulus plans was being drafted, there was a proposal to deliver relief payments via digital wallets — a great idea that could not be executed because we lack the necessary plumbing. To function seamlessly and serve everyone, the government must be responsible for the design and building of a foundation that includes the entire stack: digital identity, data and information linkages, wallets, digital access and inclusion.

While I have advocated for a serious government-led pursuit of a C.B.D.C., it requires the Federal Reserve to embrace the concept and its far-reaching implications. A digital currency could pave the way for an infrastructure that serves everyone, but it depends on a government that can build a solid, utilitarian foundation to ensure that every dollar — private or public — goes to the right place.

PNC goes on the offensive

PNC, the Pittsburgh-based regional lender, said this week that it would sell its $17 billion stake in BlackRock, the asset manager, which it has held for the past 25 years. In an interview with The Financial Times, the bank’s chief, Bill Demchak, said he wanted to use the windfall to buy another bank.

“I can’t stress the importance of being able to play offense,” Mr. Demchak said. With interest rates near zero and bad debts ballooning, he reckons that banks less lucky than his may have to sell themselves at a steep discount.

• A few years after PNC bought into BlackRock, the asset manager went public in 1999. Its shares are up more than 5,000 percent since then, making it “one of the financial industry’s most lucrative bets,” according to Bloomberg.

What could PNC buy? Some speculate that the U.S. division of a European bank could be attractive. Or, if the economy rebounds quickly and no suitable opportunities arise, “we’re going to be left with diluted earnings and excess capital,” Mr. Demchak said. That would still be a more comfortable position than many of his rivals are in.

• Ever hopeful, dealmakers predict a sharp rebound in M.&A. in the second half of the year. (Bloomberg)

• BT is reportedly shopping its network business to sovereign funds and infrastructure investors, at a valuation of about $24 billion. (FT)

• Intelsat, the satellite communications provider backed by BC Partners and Silver Lake, has filed for bankruptcy protection. (FT)

• President Trump threatened to “cut off” trade with China over its handling of the coronavirus outbreak. (Fox Business)

• The Taiwan-based chip maker T.S.M.C. said it would build a plant in Arizona, a win for the Trump administration. (NYT)

• Amazon’s showdown with unions in France is testing its ability to deal with labor demands. (NYT)

• G.D.P. doesn’t credit social distancing, which means it isn’t counting the value of lives that are being saved. (NYT)

• A is for Automation: a book to prepare children for the future of work. (Quartz)