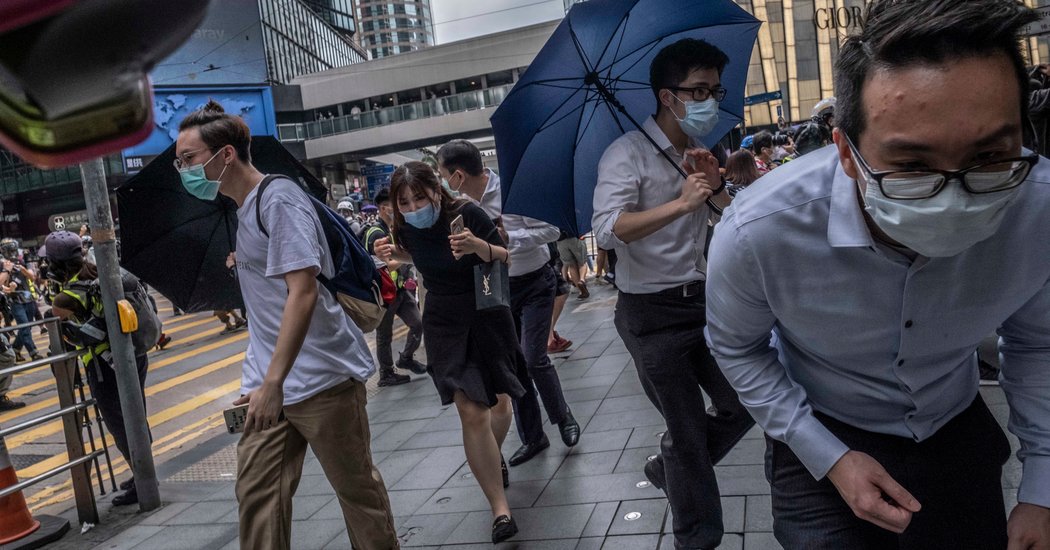 HONG KONG — Thousands of protesters in Hong Kong defied police orders on Wednesday as they took to the streets and gathered in shopping malls to voice their outrage at the Chinese Communist Party’s moves to tighten the grip over the semiautonomous region.

Riot police officers fired pepper balls into crowds in Central, a business district, at lunchtime, and tackled people who sought to protest in Causeway Bay, a shopping area. They herded groups of protesters and made them sit on sidewalks behind police lines.

The protesters had gathered to express their anger with plans announced by Beijing last week to impose national security laws on the city and at a bill under debate by the local legislature to criminalize disrespect of China’s national anthem.

“I think maybe this is the last chance we have to fight back,” said Sheldon Liu, a 20-year-old college student who joined the march in Causeway Bay. “Of course I hope these laws will not pass, but I feel it is impossible to stop.”

Beijing last week announced plans to enact national security legislation in Hong Kong, in what critics say is its boldest attempt yet to assert control over the territory. On Sunday, thousands of protesters poured into the streets in defiance of social-distancing orders and clashed with police officers who fired tear gas, rubber bullets and a water cannon in the city’s largest demonstration in months. Nearly 200 people were arrested.

The protest on Wednesday was timed to coincide with when the city’s lawmakers were scheduled to debate legislation that would threaten a fine of up to about $6,500 and three years in prison for anyone found to be misusing or insulting the Chinese national anthem, called “March of the Volunteers.”

The demonstrators had earlier said they would protest outside the city’s legislative chambers, but their plans were thwarted by the police who deployed officers in vast numbers to the area to prevent any unauthorized access.

At midday, groups gathered to sing and chant at a mall in the Causeway Bay neighborhood. Police officers stopped some as they took to the streets, but a few thousand more briefly marched down main roads on Hong Kong Island.

They were met by the police, who sent them scattering down side streets.

Protesters had also called for a general strike on Wednesday to express their dismay with the new national security legislation. Carol Ng, the chairwoman of the Hong Kong Confederation of Trade Unions, an umbrella group of pro-democracy labor groups, said that given the short notice, she expected the number of participants to be lower than in strikes held last year.

Instead, she called it a “warm-up” for future protest actions by unions and workers who saw the new national security legislation as a violation of the “one country, two systems” policy that was meant to protect Hong Kong’s status within China.

“If you breach your agreement in the first place, do you think people will be silenced?” she said. “If you get even harsher toward us, we will get even stronger and resist.”

Though a similar national anthem bill went into effect in China in 2017, it does not apply in Hong Kong. The former British colony maintains its own economic and legal systems and enjoys freedom of expression and other civic freedoms not allowed on the mainland. Those freedoms are cherished by many residents here, and sports fans in Hong Kong in recent years have taken to turning their backs, booing and even raising their middle fingers as China’s national anthem is played in stadiums during international sporting events.

Resistance against symbols of Chinese power has only grown fiercer since the protests that erupted last year following the proposal of another piece of contentious legislation that would have allowed extraditions to mainland China. The proposal was later withdrawn.

At a World Cup qualifying match against Iran in Hong Kong last year, thousands of soccer fans booed loudly and turned their backs in the stands as the Chinese national anthem played. Hordes of fans repeatedly sang another song, “Glory to Hong Kong,” which was written and composed anonymously and has since been widely adopted as the anthem of the protest movement. Other symbols of Beijing’s power targeted by protesters last year include the official emblem at the Chinese government’s main office in Hong Kong and China’s red-and-yellow five-star national flag.

Based on a 2017 decision by China’s Communist Party-controlled legislature, the National People’s Congress, Hong Kong is obligated to adopt its own version of the national anthem bill. But the city has so far been unable to pass a law, and Chinese officials and pro-Beijing lawmakers have accused the city’s pro-democracy camp of “malicious” filibustering to prevent legislation like the anthem bill from going to a final vote.

Pro-democracy lawmakers in turn have accused establishment lawmakers of illegitimately seizing control of the committee in charge of considering the legislation. Twice this month, escalating tensions between the two camps resulted in scuffles between lawmakers. In one instance, at least four pro-democracy lawmakers were carried or dragged off the floor of the Legislative Council.

Passage of the bill would amount to a significant, if largely symbolic, setback to rights activists and pro-democracy politicians who say the law could be used to further suppress free expression.

“By criminalizing any random thing considered an ‘insult’ to China’s national anthem, the authorities are taking a huge step back from freedom of expression in Hong Kong,” said Phil Robertson, deputy Asia director for Human Rights Watch. “Stopping people from criticizing songs and symbols of China is the prelude for Beijing to impose a draconian national security law on the city.”