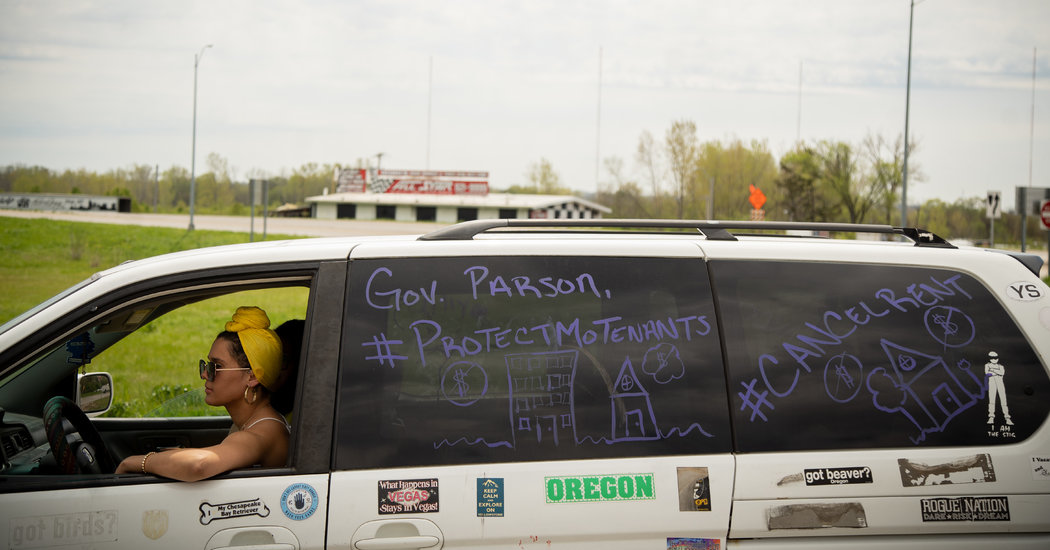 The dented Honda minivan pulled onto the shoulder of Interstate 70, just outside downtown Kansas City, Mo. Jenay Manley, in the passenger’s seat, had brought along her sister and their children to protest the difficulty of paying rent during the coronavirus epidemic — #ProtectMOTenants read the paint on the windows. Less than three minutes later, a police car pulled up, and their attempt to make a statement from the roadside had become a potential act of civil disobedience.

For weeks, civil rights activists around the country have grappled with a conundrum. With the economy shut down and tens of millions out of work, the energy for protest is high. Many are angry that black and Latino people are being disproportionately killed by the virus. They’re angry that service workers already struggling with bills were the first to lose their jobs. They’re angry that corporations are getting bailouts while small businesses wither.

It’s a moment that might otherwise give rise to demonstrations in the streets. Instead, people are generally shut in by government order, or simply fear getting within six feet of another human. There have been hashtags (#CancelRent) and email blasts and grainy video rallies, but those methods are more easily ignored by the bankers, landlords and elected officials whom demonstrations are designed to discomfort.

Seeking the coronavirus equivalent of Occupy Wall Street’s colonization of public parks almost a decade ago, organizers have been batting around approaches. Would dropping banners from office buildings make an impact if nobody is at work to see them? Are public gatherings worth the effort to tape 6-by-6 squares to space out the crowd — and would anyone abide by them?

“Direct action is so much about people putting their bodies on the line,” said John Washington, an organizer in Buffalo with People’s Action, a national network of local advocacy organizations. “In a way, Covid has stolen that.”

Some groups have tried to break through with car protests, like the Los Angeles caravan that honked horns outside Mayor Eric Garcetti’s house to call for a broad moratorium on evictions. In Minneapolis, a group called Inquilinxs Unidxs Por Justicia (United Renters for Justice), drove around U.S. Bank’s national headquarters calling for a rent and mortgage holiday. It didn’t back up much traffic, since downtown was empty.

But coronavirus restrictions could have some upside by forcing activist groups to get better at harnessing the power of the internet, said Maurice BP-Weeks, co-executive director of the Action Center on Race & the Economy and a veteran of the door-knocking approach to organizing.

“If you’re bringing new people into your movement right now, you’re doing it online,” Mr. Weeks said. “It’s a way to scale that we haven’t really seen before, and my hope is that we come out of it with better digital organizing and more creative tactics in general.”

The United States had a housing crisis long before the new coronavirus. In 2018, about a quarter of tenants — close to 25 million people — paid over half their income on rent, according to the Joint Center for Housing Studies at Harvard University. Now, with businesses closing and job losses growing, surveys showed that the number of tenants behind on this month’s rent is roughly twice the March level and that many are using credit cards and deferrals to put off monthly bills.

Having pushed eviction restraints and rent control ordinances to the top of many legislative agendas in recent years, tenants’ rights groups from New York to California are largely united behind a list of policy demands. They include a suspension of rent and mortgage payments for the duration of the crisis — that is, forgiveness of rents and house payments, with no back payments accruing — along with a ban on evictions and utility shut-offs, and emergency shelter for the homeless.

But they are struggling to find a galvanizing symbol that draws notice and inspires action. “It’s a crisis of imagination,” said Tara Raghuveer, director of KC Tenants, which organized the Interstate 70 protest.

The seeds of the protest began a month ago, when the group released its own petition for rent and mortgage suspension. The list was followed by a digital rally, and after a month of waiting for the state government to respond, the group was seeking a creative way to escalate.

It settled on having people station themselves at five-mile intervals along the 250-mile route between Kansas City and St. Louis — the width of Missouri. That way, people could travel safely in their own cars while maintaining solidarity with the messages painted on their cars. To mimic the feeling of being in a large group, KC Tenants created an audio track on its website with tenants’ voices and chants like: “What do we want? Rent Zero! When do want it? Now!” That way, everyone involved, even if alone, would hear the same sounds of protest.

Sitting on the shoulder of I-70 at noon sharp, Ms. Manley took out her iPhone and pressed play. Her van rocked as cars whizzed past while inside the car calls of “I believe that we will win” echoed from a portable speaker.

A 27-year-old single mother, Ms. Manley had gotten home at 7 that morning after working the night shift as a clerk in a gas station. She was tired but eager to protest and be heard, so she gathered her 6-year-old twins along with her sister and her sister’s two children, and they drove to their appointed place on the highway.

It was political as well as personal. To make the April rent, Ms. Manley borrowed money from friends and sold plasma, along with an old washer and dryer and video games her children no longer played. She was still late with her payment, prompting the owners of her apartment complex to leave a note on her door saying they would file for eviction if she did not pay, she said.

The May bill will arrive soon, and she’s not sure how she’ll pay it. A statewide rent suspension would be a lifeline.

Two minutes 40 seconds into the protest recording, while Ms. Manley’s own voice telling a story of struggle came through the speaker, a police car pulled up behind the van, lights flashing. First, the officers told the passengers that they could remain on the side of the highway so long as they stayed in the van.

A few minutes later, two more police cars arrived. This time the officers told Ms. Manley that idling on the side of the highway was unsafe. If she refused to leave now, she’d be failing to obey a lawful order. Ms. Manley moved along, circled around an exit ramp and parked on the shoulder of a road, deliberating what to do.

“How do we continue to bring up our issues and speak truth to power if we can’t actually do anything?” she asked. “We’re trying to keep a safe distance, we’re trying to follow the regulations for Covid-19 and the stay-at-home order, and yet that’s still not enough.”

Ms. Manley called a lawyer who was advising the protesters, and who told them that if she went back on the interstate, she’d probably be arrested. Rather than go back, she decided to drive up and down the highway and hope that other drivers noticed the messages on her car. It wasn’t very effective, but it felt better than going home.