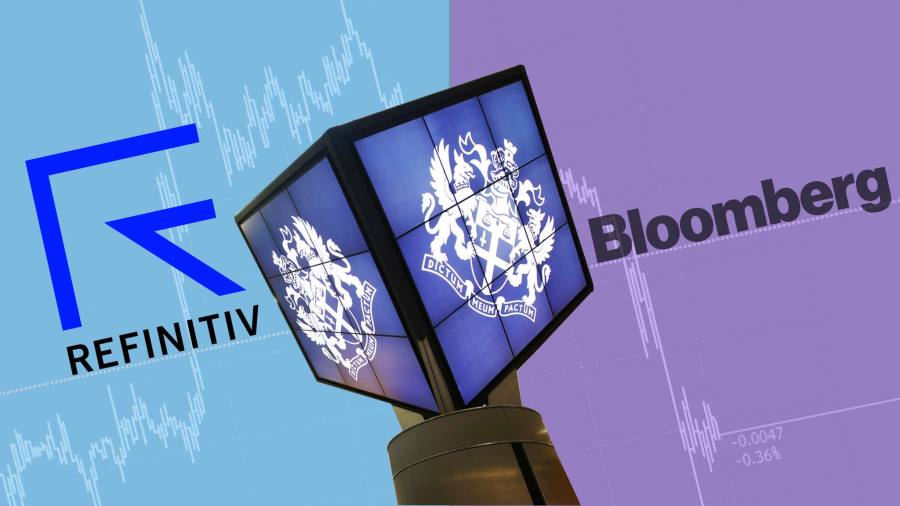 Refinitiv is struggling to close the gap on Bloomberg in the $32bn financial-data industry, underlining the challenge that London Stock Exchange Group will inherit with its planned purchase of the information provider.

A closely watched annual study earlier this month indicated that Refinitiv’s share of the market for supplying prices and analytics to banks and asset managers slipped to 21 per cent in 2019, down a percentage point from the year before and well behind Bloomberg, with 33 per cent.

Over the past five years, Refinitiv has fallen back in the race to become the data provider of choice for Wall Street and beyond, according to the study by Burton-Taylor International Consulting. Its share in 2014, when the business was known as Thomson Reuters, was 26 per cent.

Such a decline in market share is “significant,” said Robert Iati, a director at Burton-Taylor, which is owned by interdealer broker TP ICAP.

The market for financial information has enjoyed rapid growth in recent years, fuelled by increased automation — which creates a need for real-time data that can be fed directly into traders’ algorithms — and also by companies and governments turning to capital markets rather than banks for their financing.

Total global debt hit 225 per cent of gross domestic product in 2018, according to the IMF, compared with about 180 per cent in 2007. That wave of borrowing has also boosted derivatives and foreign exchange markets, while giving a lift to smaller data providers such as S&P Global Market Intelligence, FactSet, Moody’s Analytics and ICE Data Services.

LSE is buying Refinitiv from a consortium led by Blackstone, the private equity group, and said last week that it had “a lot of confidence in the strategic rationale of the transaction”. The all-share deal, worth $27bn, is expected to close later this year.

For the first time, Refinitiv did not provide numbers for this year’s study by Burton-Taylor, which drew on previous disclosures and other industry sources.

“Comparing apples to oranges is never easy,” Refinitiv said. “The market segment we see ourselves operating in is broad, increasingly digital and extends beyond the traditional legacy market data segment. For example, Refinitiv includes indices, venues, trading systems, digital, cloud-based delivery, AI and risk — this wider definition better represents the range of our partners and requirements of our vendors.”

Quarterly filings from Thomson Reuters, which owns a minority share in Refinitiv, show that the company’s revenues were flat at $6.2bn on a constant currency basis last year, although its adjusted ebitda margin improved to 35.3 per cent from 31.4 per cent. By contrast, Bloomberg’s revenues were up almost 6 per cent to $10.5bn, Burton-Taylor calculated, as investors bought more of its data for pricing and valuations.

Refinitiv’s market share has not improved in the first full year that it has been controlled by the Blackstone-led consortium, which bought a majority stake in Thomson Reuters’ Financial and Risk division for about $20bn in late 2018.

Last year, Refinitiv had 390,000 users of its terminal, known as Eikon, but that is down from 445,000 in 2010, according to Burton-Taylor. Its prices are variable, depending on the type of product and customer, but tend to be cheaper than Bloomberg.

Dan Connell of Greenwich Associates, a consultancy, noted that Bloomberg had spent heavily on improving the speed and maintenance of its terminals, while constantly bundling in new features.

“We’ve seen a lot of people tread this path [of taking on Bloomberg] and fail. It’s a very difficult market to break into. The terminal just works,” he said.

Analysts said that the onus was on LSE and Refinitiv to make the most of the latter’s traditional strengths such as Tradeweb, the bond trading venue, and FXall, its currencies marketplace.

Just over 62 per cent of Refinitiv’s revenue comes from real-time information and four-fifths of that is concentrated in Refinitiv’s top 75 accounts, Burton-Taylor estimated.

That dovetails with LSE’s plans to focus on getting its biggest bank and asset-manager customers to spend more on data and services that overlap.

But the plans are ambitious. LSE is forecasting a compound annual growth rate in turnover of 5 per cent to 7 per cent for the combined business in the first three years after the deal is completed.

That is a big task, said Chris Turner, an analyst at Berenberg. “You need management to do something special to deliver on that,” he said.