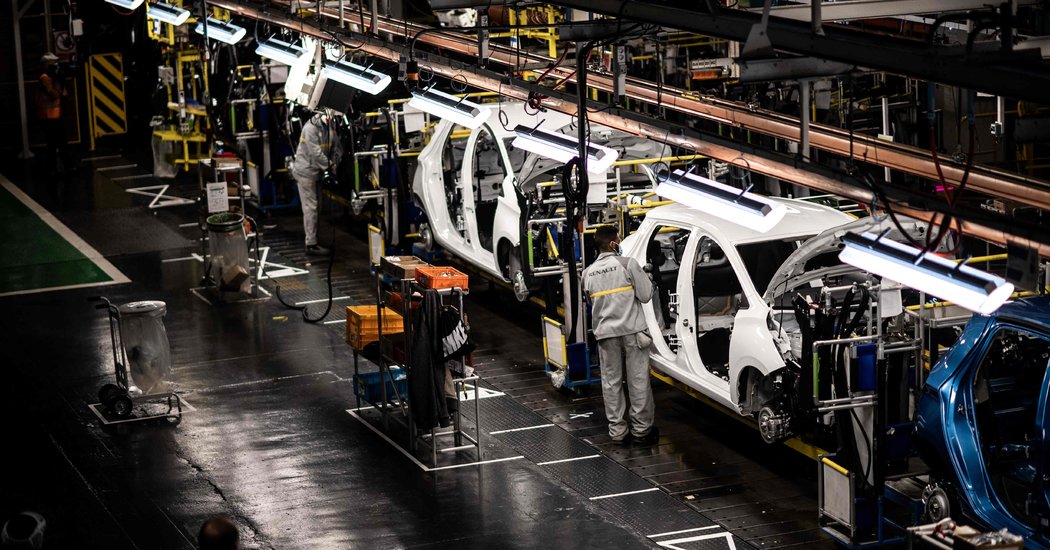 TOKYO — Nissan and Renault, the quarrelsome main partners in the world’s largest automaking alliance, announced a plan on Wednesday to try to reset their troubled relationship as they seek to survive the coronavirus’s devastating impact on the car industry.

The plan seeks to more clearly delineate each company’s turf so they can better absorb catastrophic declines in sales while developing new technologies they need to remain competitive.

For example, Nissan will take the lead on development of autonomous driving technology and Renault will be in charge of developing electric vehicles.

Nissan will be the dominant partner in Japan, China and the United States, while Renault will take the lead in Europe, Russia, Africa and Latin America. Mitsubishi, which is also a member of the alliance, will be in charge of the rest of Asia.

However, there are no plans to merge the companies, said Jean-Dominique Senard, the chairman of the alliance. “We don’t need a merger to be efficient,” he said during an online news conference Wednesday.

The alliance has been in crisis since the arrest of its former chairman, Carlos Ghosn, in 2018 on accusations of financial wrongdoing, which he has denied. Without Mr. Ghosn’s dominant presence at the top, simmering tensions and jealousies burst into the open.

But breaking up was not an option. On the contrary, the pandemic has made it even more essential for the companies to cooperate and share the enormous cost of developing new models and technology. Global demand for automobiles has gone into free fall during the lockdowns to curb the spread of the virus, battering both companies when they were already in a weakened state.

Renault sales in the European Union, its most important market, fell almost 80 percent in April when dealerships were closed and most buyers were not leaving their homes. The French government, fearful that Renault will be forced to close factories, on Tuesday pledged 8 billion euros, or $8.8 billion, to encourage sales of electric cars and help companies develop new digital technologies. The French government is a significant shareholder in Renault.

Nissan, which reports its annual financial results Thursday, has seen a steady drop in sales and profit in the last year that accelerated in recent months. Shares of both companies have plunged by more than half in the last year.

Mr. Senard, who is also chairman of Renault, insisted Wednesday that the companies had buried old grievances, identified common strengths and planned to work together in harmony.

“There is absolutely no doubt about how it will work in the future,” Mr. Senard said during an online news conference. “If there had been some few doubts in the markets these days, well, this is over today.”

The companies, Mr. Senard said, would seek to cut costs by reducing competition between them in product development and global markets. They will combine back office operations and some other functions while looking for other ways to cooperate in coming years.

“We looked back on the alliance activity, what is good activity where we can further continue to enhance, where are the areas that we are going to look to really reinforce,” said Makoto Uchida, Nissan’s chief executive.

But for years, the alliance has been promising benefits it failed to deliver, said Ferdinand Dudenhöffer, director of the Center Automotive Research in Duisburg, Germany.

“The main problem, which could be seen after the divisions of recent years, is unresolved in our view,” Mr. Dudenhöffer said in an email.

By improving the division of labor, the companies will aim to cut the costs of developing new models by up to 40 percent by 2025, they said in a joint statement. For example, Nissan will be in charge of developing larger SUVs while Renault will focus on compact SUVs.

The companies combined forces in 1999, when Nissan was on the brink of bankruptcy. Mitsubishi joined in 2016.

Nissan, which produces far more cars than Renault, has long bristled at French domination of the alliance. Renault holds a 43 percent stake in Nissan, while Nissan holds only a 15 percent share in Renault and has no voting rights.

The stresses blew wide open after the arrest in Japan of Mr. Ghosn, the architect and leader of the arrangement. Mr. Ghosn has described his arrest as a coup engineered by Nissan insiders who were afraid that he was planning to merge the company with Renault. In December, Mr. Ghosn fled Japan for Lebanon, where he has waged a media campaign to clear his name.

Mr. Senard sought Wednesday to put aside speculation he would push to combine the carmakers. “There is no plan for the merger of our companies,” he said.

Nissan has blamed its recent poor sales on decisions made under Mr. Ghosn’s leadership, including a drive to substantially expand the alliance’s market share at the expense of profits. Executives at the company have said that the push left them overstretched and diverted funds from the development of new cars.

“In the past few years, we focused too much on an expansion strategy,” Osamu Masuko, the chief executive of Mitsubishi said, adding that the strategy introduced by Mr. Ghosn had pushed the alliance’s costs to an unsustainable level.

Renault will not be searching for new partners, Mr. Senard said. Last year, Renault aggravated tensions in the alliance by pursuing a merger with Fiat Chrysler without Nissan’s knowledge. The deal eventually fell through, and Fiat later agreed to merge with PSA, Renault’s French rival, which makes Peugeot, Citroën and Opel brand cars.

“The priority is to strengthen the alliance,” Mr. Senard said. “That’s the top priority.”

Ben Dooley reported from Japan, and Jack Ewing from Frankfurt.